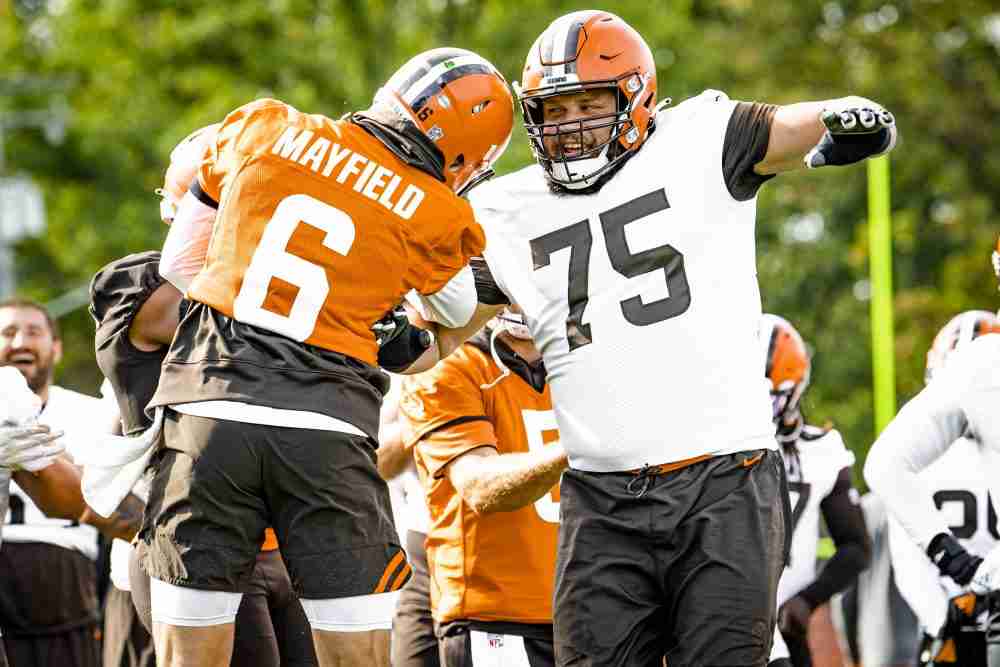 BEREA — Joel Bitonio barely qualified as an afterthought when he was drafted with the No. 35 pick in 2014. Sure, he was a high second-rounder, but he was drafted to play left guard — perhaps the least exciting position on the field — and followed cornerback Justin Gilbert at No. 8 and quarterback Johnny Manziel at No. 22.

The cream of the draft class rose to the top.

Bitonio established himself as a Browns fixture, a fan favorite and one of the league’s best players. Gilbert and Manziel were gone from Cleveland by 2016 and flamed out of the league soon thereafter.

“Great players move from team to team and I’ve gotten to enjoy my whole career so far in Cleveland, and that’s something that’s special to me,” Bitonio told The Chronicle-Telegram on Friday. “It’s a special place and hopefully we’ll get some big wins and some big things.”

Bitonio has an important couple of days ahead of him. He will start his 100th regular-season game Sunday against the Chargers in Los Angeles, near his hometown of Long Beach, becoming just the fourth Browns player since 1999 to hit the mark — left tackle Joe Thomas 167, defensive lineman Orpheus Roye 102, center Alex Mack 101. Bitonio will turn 30 on Monday.

“It is pretty cool how it worked out,” said Bitonio, who will serve as the game captain. “We are out in California, and we are going to have a lot of people there — friends, family, old coaches. It is pretty special for me to play in front of them.”

Bitonio expects 30-40 people for his homecoming and will celebrate the milestone.

“Anytime you get to put on the helmet, it is an honor and it is a privilege to play this game,” he said. “To be here for the 100th time and hopefully a bunch more is pretty dang cool.

“You think back to your first game and all of the games in between, and there are a lot of memories there. It goes quick. It feels like yesterday I was getting back out here and getting things started.”

Bitonio played left tackle at the University of Nevada but was drafted to slide inside. He quickly stepped into the starting lineup between left tackle Joe Thomas and center Alex Mack, who have combined for 16 Pro Bowls.

Bitonio made a good first impression.

“How big and athletic he was. And how he had a really good demeanor about him,” Thomas told The Chronicle by phone Thursday. “He was really focused on improving and he was really good at taking every tip and every little bit of coaching.”

Bitonio is on his fourth full-time coach and fourth general manager — Ray Farmer drafted him — and said he’d need a paper to try to list all the quarterbacks. He vividly recalls his first NFL game.

It was at Pittsburgh and the Browns trailed 27-3 at halftime under new coach Mike Pettine. Offensive coordinator Kyle Shanahan stuck with the run in the second half and went hurry-up as the Browns rallied, only to lose 30-27 on the final play.

“I’ve never been more tired than my first career NFL game. … I was gassed,” Bitonio said. “We ended up losing — shocker. I had all the emotions. I just remember sitting on the sideline and I was like, ‘I guess this is why they have oxygen.’”

Things have worked out wonderfully for Bitonio, who became a face of the organization and its longest-tenured player, been a Pro Bowler and second-team All-Pro the last three years and built a home in Cleveland. But his second and third seasons were trying times.

He finished both years on injured reserve — the first with an ankle injury and the next with a Lisfranc injury in his foot. He played only 15 of a possible 32 games.

“When you go through it back-to-back, that was tough,” he said. “You are thinking in your head, ‘Man, am I ever going to stay healthy?’”

The answer was a resounding yes. Bitonio has played every snap since the start of 2017, taking after Thomas, who played an NFL-record 10,363 before a career-ending torn triceps.

“Honestly, I think that’s probably a huge reason for my longevity, the toughness of both those guys,” Bitonio said of beginning his career with Thomas and Mack. “Obviously injuries happen, but you try and play through those minor things, because you see those guys battling and those guys working.”

As with Thomas, Bitonio’s snaps mostly came on losing teams. He was in Year 7 in 2020 when he had his first winning season, which coincided with the franchise’s first playoff trip since 2002. He missed the postseason opener in Pittsburgh with COVID-19 but returned to play in the divisional round loss at Kansas City.

He said he never considered trying to leave during the down times, and his patience was rewarded.

“A great friend and I’m so happy for him to be able to finally experience the success after dealing with the sh– like I did towards the end of my career and the beginning of his career,” Thomas said.

Morales watched him deal with a broken hand in high school that kept him off the field for much of his junior season, hurting his chances to be recruited to a big-time college. He also saw how Bitonio processed the death of his father, Mike, who had a heart attack at age 45 while Bitonio was at the University of Nevada.

“He dealt with it pretty well,” Morales said by phone. “I do know he had a lot of aggression built up, and understandably so. He said he was able to work some of the aggression out at practice when he was at Nevada.”

Bitonio almost didn’t wind up at Nevada. While he still believes he would’ve found his way to the NFL, he knows the road would’ve been tougher from University of California Davis, which was interested in him early in the recruiting process.

Morales tried to entice bigger schools and attracted Nevada with Bitonio’s film. The football season was over, so then-Nevada coach Chris Ault attended one of Bitonio’s basketball games, was impressed by his athleticism and offered him a scholarship at the last minute.

“I’m very happy I went to Nevada and I met my wife there and lifelong friends,” he said.

Bitonio exchanges weekly texts with Morales, who will travel to Cleveland for the Ravens game in December. Bitonio also stays connected to the Long Beach community, where his mom still lives.

“He’s tied to Long Beach and the whole community’s very, very proud of him,” Morales said. “Salt of the earth. What I love about Joel really is how humble he is. He just enjoys life. Every day’s a blessing.”

The “great feet” Bitonio developed in roller hockey and basketball continue to serve him well. The athleticism made him perfect for coach Kevin Stefanski’s wide zone run scheme, and he’s got the physicality to destroy blockers as he’s pulling in front of Nick Chubb and Kareem Hunt.

Thomas saw the potential early, but it was accompanied by poor technique in his move to guard. By the time Thomas retired after 2017, he knew Bitonio would be “special.”

“Really your job as a lineman is more about mistakes that you make, the consistency that you are from play to play, and I think Joel is better than those guys,” Thomas said. “Because he’s just more consistently good, which gives your team a chance to win more than just going around and having three or four highlight blocks per game.”

Bitonio got a game ball for his performance Sunday in the win over the Vikings, and coordinator Alex Van Pelt said he could get one every week. Bitonio said his body feels good and he’s a “young 30.”

“He is one of those vets who learns every day,” said veteran line coach Bill Callahan, who lit up when asked about Bitonio reaching the milestone. “He has such a great thirst for the game, and he just loves sports.

“The work ethic, the smarts and, of course, the performance all ties in.”

The superlatives continue off the field.

“He’s just a great person, and I think that’s part of the reason that so many guys on that team are drawn to him and why he’s such a great leader, because he’s so well-respected not only for what he does on the field, which is amazing, but for the type of person he is in the locker rooms,” Thomas said. “He’s like a bridge between all the different people that are on the team from different backgrounds, different position groups. You’ve got to have those glue guys, and that’s who he is.”