Commentary: To take next step, Browns must prove they can beat good teams 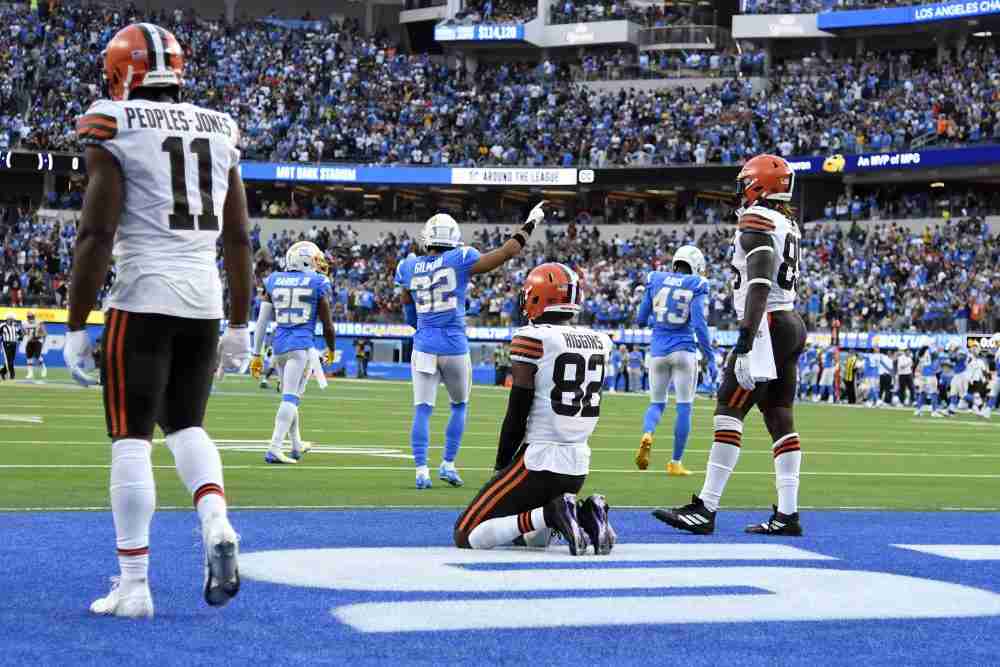 It’s really hard to win an NFL game when you give up 26 points — in the fourth quarter.

So much for all the hype about the Browns’ great defense.

We can resume that debate when the Browns beat a good team. So far, they haven’t. They are 3-2, and in their two losses — to Kansas City and the Los Angeles Chargers — they gave up a total of 80 points.

Their three wins have come against the Texans, Bears and Vikings, who have a combined record of 6-9. They held those three teams to 21, six and seven points.


Sunday in Los Angeles, against the high-octane Chargers, the Browns, playing with a one-armed quarterback, scored 42 points — but gave up 49.

This game was a morbid reminder of last year’s horrific 47-42 loss to the Ravens in Cleveland, when Lamar Jackson toyed with the Browns defense. Sunday in L.A., Justin Herbert did the same thing. Herbert came within 2 yards (i.e., 6 feet) of throwing for 400 yards.

Two of his four touchdown passes were to Mike Williams, who is a great enough receiver not to require blown coverages from opposing secondaries, gift-wrapping two long walk-in-the-park touchdown receptions. Merry Christmas, Mike!

Had the Browns only gifted him one, the teams might still be playing.

Cleveland got a terrible break on a long pass to Williams late in the game that should have been an incompletion, but wound up being a 33-yard penalty against the Browns for pass interference. Apparently, the NFL now has a new rule that if the receiver grabs the defender’s jersey, that’s considered pass interference on the defender. Go figure.

Baker Mayfield rebounded from his two post-labrum tear clunkers with an immaculate performance, completing all but nine of his 32 passes for 305 yards and a 122.5 rating, which should be enough to win a game.

How bad was the Browns defense?

Sunday the Browns hung 531 on the Chargers, which normally would win you a game — but not if your defense coughs up 493 yards, which the Browns’ beleaguered defense did in their California collapse.

“We tried various coverages, and we were into our depth in a couple of areas. It was multiple things,” said Browns coach Kevin Stefanski of the Browns’ missing-in-action defenders.

Granted, Herbert is one of the best quarterbacks in the league, and Herbert vs. a banged-up, confused secondary, which appeared to be the case Sunday, makes pass completions easier than shooting fish in a barrel.

The Chargers’ combined third- and fourth-down efficiency was a very efficient 9-for-16, including, it seemed, 100 percent in all the biggest moments.

“We’ve got to find a way to get stops,” said Stefanski. “We have been doing that, but we didn’t do it today.”

Of the two killer L.A. TDs on busted coverages by the Browns secondary, Stefanski said, “Obviously, miscommunication, and we had too many of those.”

However, the Browns had enough points to win most games. But Sunday they weren’t facing most teams. They were facing the jet-propelled Chargers.

That, indeed, is exactly the point now. The Browns are considered one of the best teams in the NFL. That comes with a price. The price is expectations. Be careful how much you celebrate a blowout win over the hapless Bears, because the Chargers, or a team just as good, might be lurking around the next corner.

The bar is higher for the Browns now. They raised it themselves by improving so rapidly the last two years.

The bar is also higher for Stefanski, who raised it himself with his sensational Coach of the Year season last year.

The honeymoon is over for the coach and the team. Wins over bad teams are no longer enough. The next step is wins over good teams. It’s winning a game against a really good team, when winning is really hard.

That’s now the measuring stick for this Browns team and this Browns coach. In their last possession of the game Sunday, after the defense had again been unable to halt the Chargers’ charging offense, the Browns offense, with no help from its play caller, looked overwhelmed and confused.

Or maybe it was just exhausted.

It’s hard scoring 42 points in an NFL game. When you do, it should be even harder to lose the game. The Browns lost that game.

Their next chance comes Sunday against the undefeated Arizona Cardinals.