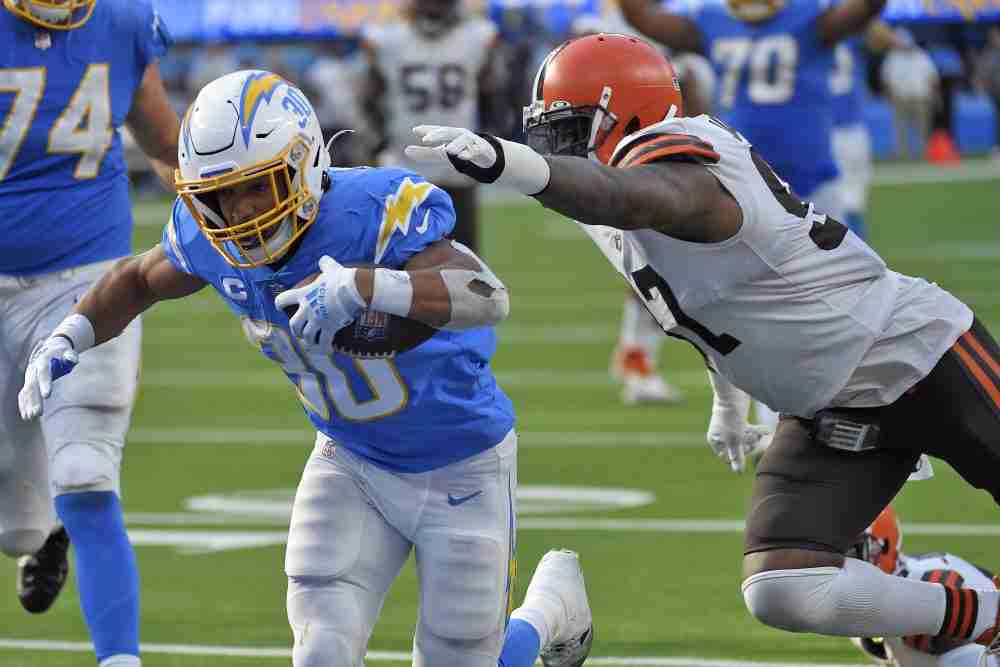 Baker Mayfield rebounded like Shaquille O’Neal, completing 72 percent of his passes a week after connecting on only 45.5 percent.

The defense played like it belonged in the Big 12, allowing 493 yards and 7.3 per play.


The Browns lost 47-42 to the Chargers on Sunday in Los Angeles in a game full of excitement for fans and regret for the Browns.

The Browns (3-2) led 27-13 early in the third quarter. They allowed five touchdowns in the next 26 minutes, including four in the fourth quarter.

The Browns have Super Bowl expectations and talent — at least when healthy — but still need to learn to consistently finish good teams on the road. They failed to do so in the 33-29 opening loss at Kansas City and again Sunday.

It’s no coincidence the Chiefs and Chargers are expected to join the Browns in the AFC playoffs. The Browns have 12 regular-season games remaining to fix things before any rematch, starting next week against the 5-0 Arizona Cardinals.

Here are five takeaways from the game that will take coach Kevin Stefanski and his staff forever to analyze.

Commentary: To take next step, Browns must prove they can beat good teams

The Browns weren’t going to hold down the Chargers like they did the Bears (six points) and Vikings (seven points) the previous two weeks. Especially not with end Jadeveon Clowney and cornerbacks Denzel Ward and Greg Newsome II missing for all or most of the game.

They also need to resolve miscommunication issues that cost them dearly. Receiver Mike Williams got behind the defense for 72- and 42-yard touchdowns when safeties Grant Delpit and Ronnie Harrison Jr., respectively, made the wrong coverage choices.

Chargers quarterback Justin Herbert, a rising star, made the Browns pay by noticing each mistake and exploiting it. He went 26-for-43 for 398 yards, four touchdowns, two sacks and a 122.0 passer rating.

“I don’t think we were ready as a unit after so many guys went down,” Garrett said.

One more stop might’ve been enough to change the outcome. The Browns had chances to get off the field but went 0-for-3 on fourth down, including a fourth-and-2 from the Chargers 24-yard line early in the third quarter. If the defense makes a play there, the game might’ve been over.

Not included in the 0-for-3 was a fourth-and-4 pass interference penalty on Green as he covered Williams. Garrett was right when he said it was a “terrible” call, as Williams was the one doing the jersey holding.

“Refs are human and they make mistakes,” said Garrett, who had a sack to give him seven on the year. “We get held to a high degree of excellence and so should they.”

When the defense is healthy, it has the potential to be in the league’s top 10. Right now, it has plenty to clean up.

“We’ve got to find a way to win these type of games,” safety John Johnson III said.

Mayfield said his left shoulder, which has a partially torn labrum, was “pretty much the same” as it was last week.

His accuracy was completely different.

“I thought we were efficient in the pass game, we just didn’t make the plays we needed to,” he said.

He was particularly frustrated by three drives into the red zone in the first half that netted six points and said a better showing would’ve changed the outcome.

While Mayfield’s right when he says the Browns have yet to play a “complementary” game where the offense, defense and special teams all play well, his ability to bounce back from his worst game of the season and show he can be effective despite the shoulder injury is huge for the rest of the season.

One of the rare smart plays by the Browns defense was pushing running back Austin Ekeler into the end zone with 1:31 left as he tried to run out the clock to set up a last-second field goal to win the game. Stefanski wanted his defense to give the offense a final chance and it did.

That was one of several decisions by both coaches that would’ve left Don Shula and Tom Landry shaking their heads.

A decade ago Los Angeles’ Brandon Staley would’ve been fired for going on fourth down deep in his territory. Now it’s accepted — at least by some — because the data say it’s the smart move. The same applies to going for a 2-point conversion when an extra point would’ve cut the deficit to seven in the third quarter.

Stefanski shares a value system with Staley and went twice more on fourth down, excluding the final Hail Mary. One resulted in a drop by Odell Beckham Jr. and the other a touchdown by Hunt.

Stefanski established the run early. Then he stuck with it.

He called five runs on the first touchdown drive and nine on the second. He used three tight ends on nearly every snap, as the Browns held the ball for 21:39 of the first half.

Chubb finished with 21 rushes for 161 yards, including a 52-yard touchdown. Hunt rushed 12 times for 61 yards and two touchdowns.

Stefanski had his reasons for getting conservative with his play calls on the final two drives.

With a 42-41 lead and 3:08 left, the Browns needed two first downs to all but cement the win. Stefanski called an off-tackle run for Hunt that went 1 yard, took a shot with a pass that fell incomplete on second down and went with a safe — perhaps too safe — draw to Hunt on third down.

The Browns allowed only one sack and Mayfield said he was “proud” of the tackles, but Stefanski said he was concerned about the protection holding up.

He used the same explanation for three short, quick passes to start the final drive. The Browns picked up 11 yards in 50 seconds after taking over with 1:31 left. They were able to take three deep shots to finish the game but didn’t threaten the end zone.

“I just wanted to be smart with our protection to make sure that we weren’t holding the ball,” Stefanski said. “That’s a good front and we were in our depth there at tackle.”

Mayfield was upset about a no-call on second down on the second-last drive. Receiver Donovan Peoples-Jones ran an out-and-up on the right sideline and was mugged by the cornerback. Mayfield also said receiver Rashard Higgins was grabbed. No flag was thrown.

“Might as well forward the fine letter now,” Mayfield said. “We asked the ref on the sideline how the hell he missed that call.

“But we shouldn’t even have been in that position. We left too many points on the field in the first half. We left it in the hands of somebody else. We have to be better on that.”

Commentary: To take next step, Browns must prove they can beat good teams
Commentary: Browns still looking for signature win