Mailbag: Are Browns better with or without OBJ? Has team played to its potential? What’s the deal at left tackle? 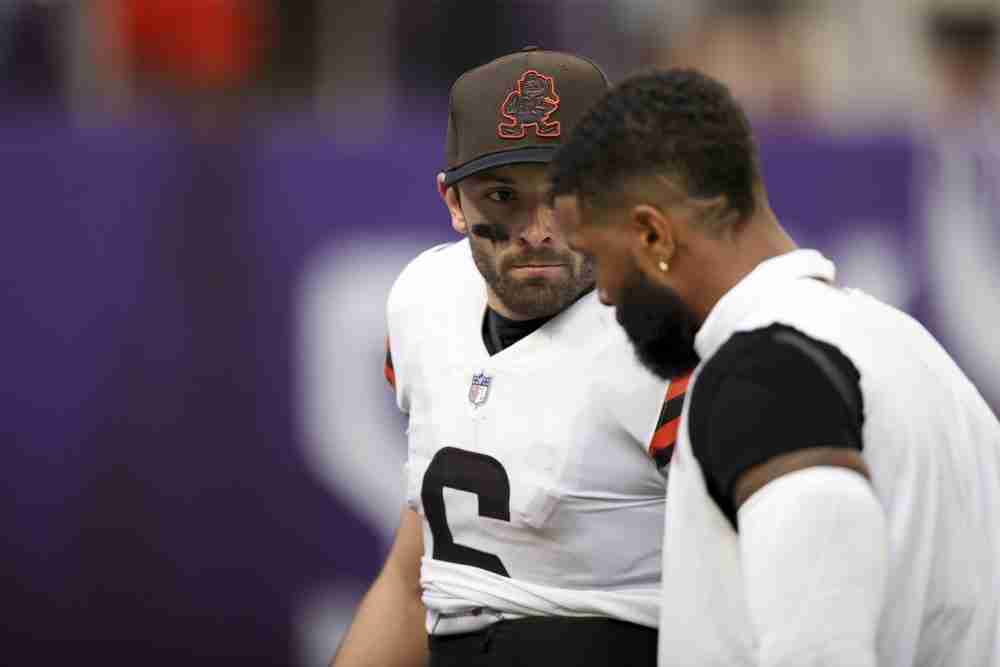 Q: Your views on the OBJ issue?? Are they better with or without him on the field??

A: You’re giving me the chance to get on my soapbox and plug my podcast, Zone Coverage, which is available on BrownsZone.com and Apple podcasts.

I had this discussion with Dave Chudowsky the other day and got heated about it. I know Baker Mayfield’s numbers are better without Odell Beckham Jr., but I just can’t wrap my head around the quarterback and offense being worse off with one of the most talented receivers in the NFL.

Beckham may have selfish tendencies and court drama, but so do most of the best receivers in NFL history. He’s incredibly gifted, liked by his teammates and is a valuable asset. This has been evident in his two games back this season. He caught five passes for a team-high 77 yards against Chicago, then was open all day last week against the Vikings. The final incompletion his way was miscommunication with Mayfield, but three other misses were just bad throws and cost the Browns two touchdowns.

I believe Mayfield has matured enough to not force the ball to Beckham and Beckham is willing to accept his role in the diverse offense. So the Browns are clearly better with Beckham, and that will become more obvious when Mayfield makes better throws.

Q:
Have the Browns reached their ceiling in any of the games they’ve played this season? If not, how do they get there?

A: I don’t think they’ve come close. At least not at the same time.

The offense played as well as it can in the first three series against the Chiefs in the opener, marching up and down the field with ease. It’s been unable to match that success since. The defense has put together back-to-back dominant performances.

The key to the team reaching its potential will be continuing to evolve throughout the season and finding a way to play the ever-elusive “complete game.” For the offense, Mayfield needs to throw it accurately and connect with Beckham, and Jarvis Landry needs to return from the knee sprain. Mayfield misses him. A healthy Jedrick Wills Jr. at left tackle would also help.

On defense, the key pieces need to get and stay healthy, and the front four must keep leading the way.

Q: Are the Browns risking a more serious injury to left tackle Jedrick Wills Jr. by running him out there on a bad ankle every week? Have they looked at any available tackles in free agency or via trade?

A: He’s not playing this week, so we’ll see if the time off enables him to play next week against the Cardinals.

I understand the question and it didn’t look good when Wills had to leave the last three games because of the ankle. But the Browns are conservative with injuries, so I don’t think they were risking Wills’ long-term health by playing him with a sprained ankle. The coaches wanted him to show toughness and the willingness to play through a minor injury, and he did. I expect if he’s 80 percent next week he’ll be back in the lineup. That’s what offensive linemen do.

As for adding a tackle from the outside, that should become a priority following the news that top backup Chris Hubbard plans to have season-ending triceps surgery.

Q: So will it be James Hudson III or Blake Hance starting in place of Wills?

A: Coach Kevin Stefanski wouldn’t say when I asked Friday, and both have replaced Wills during games this season. I got conflicting messages during the week when trying to figure out who it would be, so I’m making an educated guess by saying Hudson. The fact that he was the choice when Wills aggravated the injury last week in Minnesota showed me the coaches have seen improvement and were willing to give him a chance.

But I wouldn’t be surprised if it’s Hance. He was the choice in Weeks 2 and 3, is slightly more experienced and a smart player.

Q: What happened to Anthony Schwartz?

A: The rookie receiver hasn’t had a catch since his strong opener and his snaps dropped to a season-low 15 on offense last week. (He did return a kickoff for the first time.)

Schwartz’s role was always going to shrink when Beckham returned to the lineup. His top asset is his speed, and Beckham provides that on an every-snap basis. There’s still a role for Schwartz, but it’s secondary and could decrease further when Landry returns. Stefanski values Schwartz’s speed too much not to play him at all, and it affects how defenses line up. I’d expect a deep shot or two to Schwartz every week, and maybe an end-around. If he turns the chances into something big, it’s a bonus.

I’ll add that Schwartz continues to show inconsistency catching during the portion of practice open to reporters. He drops too many passes.

Q: What’s the status of the offensive lineman Michael Dunn? That original 53-man roster seemed to be heavy on OL. Now I’m glad.

A: He’s healthy after missing time at the end of training camp and is likely the backup center with Nick Harris on injured reserve. Dunn is more of a guard and center than tackle, so he’s not currently in the mix to fill in for Wills.

You’re right about the line numbers. I didn’t expect 10, but the organization values depth up front, which makes sense.

Q: The Browns have never played against Justin Herbert so when I listened to your podcast this week and you described Herbert as being legit, with great arm strength and accuracy, I had to take a look at past Charger highlights for myself. I didn’t realize just how good Herbert is. He can attack every part of the field. I’m struggling to imagine what Coach Stefanski, Coach Joe Woods and Coach Mike Priefer will come up to win on the road against an emerging team Sunday. I mention all 3 coaches because I just don’t think the Browns can win Sunday without offense, defense and special teams all showing up strong.

A: The Chargers are certainly a stiff challenge. Herbert is a big-time quarterback, he’s surrounded by weapons and I’m impressed with first-year coach Brandon Staley. But I have the Browns winning today.

The Browns are as talented as any team in the league, playing great on defense and well-coached. Not only can the Browns run the ball, I expect Mayfield to play much better this week. Contributions from every phase would certainly help a lot.

Q: First, thanks for all you do in keeping us informed on all things Cleveland Browns. Lifelong fans like me from all over the country appreciate it — even all the way out where I am in Boise, Idaho.

I have noticed that the Browns have repeatedly cut players who are splitting time between the active roster and the practice squad, including at least Elijah Lee and Joe Jackson, and then they have re-signed them. Could you explain how the bouncing back and forth between these squads works? In baseball, they just demote players with options remaining to the minor leagues, but that doesn’t seem to be the case in football. If you could elucidate this and make me less confused, I sure would appreciate it.

A: A player can bounce between the active roster and practice squad an unlimited number of times, but there is risk. When he’s cut, he’s available to the rest of the league, whether as a free agent for a vested veteran or through waivers for younger players. I believe general manager Andrew Berry times the moves with this in mind, knowing if the cuts happen later in the week, a player is less likely to be picked up by another team.

This doesn’t exactly relate to your question, but it’s worth noting two players can be elevated to the active roster for a game before reverting back to the practice squad. The Browns did that Saturday with Jackson and safety Jovante Moffatt. Teams can also protect four players on Tuesday each week from being signed by another team to its active roster. The Browns have usually protected quarterback Nick Mullens and kicker Chris Naggar.

Q: Hi Scott. I have not heard anything about Olivier Vernon’s health status. With some of our injuries, I would think he could be a good addition to the team.
— John, Bullhead City, AZ

A: Vernon suffered the torn Achilles tendon Jan. 3 in the regular-season finale against the Steelers, so he wasn’t ready to sign with a team for training camp. Recovery time from such a serious injury varies by case, and more than 40 percent of NFL players with Achilles tears from 2009-16 didn’t play again, according to a study in the American Academy of Orthopaedic Surgeons Now Special Edition. The odds of a successful return have to decline for someone over 30, and Vernon turned 31 on Thursday.

Just looking at safety Grant Delpit as an example, the 23-year-old wasn’t cleared for a full return to practice until training camp this year, about 11 months after his Achilles ruptured. So if Vernon hopes to return and the recovery is going smoothly, I’d expect him to start working out for teams sometime in November.

The Browns are in a good spot with their three-defensive end rotation of Myles Garrett, Jadeveon Clowney and Takk McKinley, but there’s a ton of time left in the season and all three have had issues playing a full season and missed practice time this week with injuries. If one of the three is out for an extended period or for the expected playoff run, I would fully expect Berry to pursue Vernon, assuming he’s healthy and wants to play.

Mailbag: How will Browns fare in tough upcoming stretch? Is Myles Garrett in store for nothing but double teams?
Mailbag: Of Odell Beckham Jr., Jarvis Landry, Austin Hooper, who’s back in 2022? What’s going on with the deep TDs allowed? Who’s going to call plays on defense?