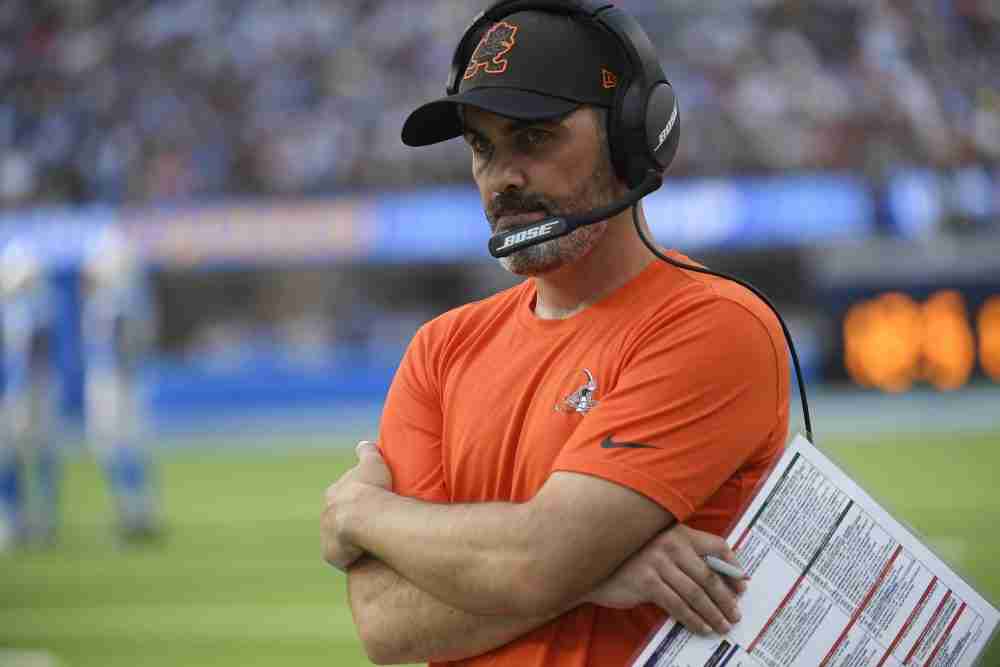 Kevin Stefanski would love to have the fourth-quarter third-and-9 draw call back. Not just because it didn’t work, but for how he handled the pressure-packed situation.

“Yes, in hindsight I wish I had done something different,” Stefanski said Monday. “This is where I have to put our guys in position to succeed. I didn’t do that there, and I’m sick about it.”

Stefanski said there were “a thousand reasons” the Browns lost 47-42 to the Chargers on Sunday in Los Angeles. For a play caller whose offense put up 42 points and 531 yards, a couple of decisions came under scrutiny after the team blew a 14-point third-quarter lead as the Chargers scored 26 in the fourth quarter.

The head-scratching draw to Kareem Hunt with 2:55 left topped the list.

The Browns were clinging to a 42-41 lead when they got the ball back on their 14-yard line with 3:08 left. After a 1-yard Hunt run on first down, Baker Mayfield threw incomplete.

Mayfield complained after the game that the officials missed penalties committed against receivers Donovan Peoples-Jones and Rashard Higgins. Peoples-Jones was the first option and was clearly shoved beyond 5 yards as he tried to run an out-and-up.

Stefanski called a draw to Hunt on third down that went for 3 yards. The Browns punted, and the Chargers marched down the field for the winning touchdown.

“I definitely got too wrapped up in the previous play call with the clock stopping and how that unfolded,” Stefanski said. “I have to put our guys in position and I can’t do that to our team.”

He was asked if he got caught up in the officials not calling a penalty along their sideline.

“I’m never going to rely, and we as a team, are not going to rely on the officials,” Stefanski said. “I need to in the moment, whether something gets called or doesn’t get called, I’ve got to move on and make sure I give the guys a chance to succeed.”

He defended another draw call, this one on third-and-14 from the Chargers 21 in the first quarter of a scoreless game.

Hunt gained 9 yards, then the Browns tried to get the Chargers to jump offside on fourth down. When they didn’t, the Browns took a delay of game penalty, and Chase McLaughlin made the 35-yard field goal.

“Trying to really help the field goal,” Stefanski said of the draw. “Third-and-longer when you get down to the red zone and you limit the amount of space you have, it becomes difficult. We had a good run that really helped the field goal there.”

After the delay penalty, the run netted 4 yards. Stefanski said he didn’t think calling the early and late draws sent the message he doesn’t trust his passing game in key spots.

“I talked to the offense about those calls,” he said. “I would just tell you I have to do a better job, bottom line.”

Stefanski isn’t going to give up play-calling duties and said he gets a lot of help in the gameday collaboration with coordinator Alex Van Pelt and line coach Bill Callahan. He also explained the three short passes to start the final drive that began on the 25-yard line with 1:31 left.

After a 6-yard hook to Higgins on first down, Stefanski called a play with four vertical routes that Mayfield ended up checking down to Hunt for 3 yards. Stefanski then called a short pass to Hunt to make sure they picked up the first down. The Browns reached their 46, where Mayfield threw three deep incompletions, the last a Hail Mary.

Stefanski said he didn’t alter his play calls to protect Mayfield’s left shoulder, which has a partially torn labrum. He was mindful of having backups at both tackle spots for much of the fourth quarter.

“You’ve got to call the game that is called for,” Stefanski said. “Certainly understand that we had some guys playing in positions where I need to make sure I call the game in an appropriate fashion, but that doesn’t excuse not being aggressive when it’s called for.”

The Browns are 3-2 and their two losses ended with Mayfield having the ball and needing a touchdown for the win. He’s led six winning drives in the fourth quarter in his four-year career.

“I’m not worried about that. There’s a bunch of other things we could’ve done right to not even get to that point.”

Stefanski had a timeout left when the Browns settled for a 31-yard field goal to end the first half after defensive tackle Malik McDowell recovered a fumble at the Los Angeles 22-yard line with 38 seconds left. Mayfield threw a 9-yard completion to running back Nick Chubb, then 20 seconds elapsed before the next snap.

“We were slow to get into that second play, we had some miscommunication,” Stefanski said. “Had I known that, I would have called timeout right after the first play.”

He also said he’d examine the decision to punt after the fateful fourth-quarter draw, especially given the defense’s inability to stop the Chargers. edjsports.com ranked it as the worst NFL coaching decision of the weekend, estimating punting instead of going for it on fourth-and-6 from the 18-yard line lowered the win probability by 18.1 percent.

“I’ll look at all those things,” Stefanski said.

What he won’t do is blame the officiating. Even if his players did.

Defensive end Myles Garrett joined Mayfield in criticizing the officials after the game, calling a pass interference penalty on cornerback A.J. Green “terrible.” The penalty came on fourth-and-4 in the fourth quarter, and instead of the Browns having the ball, the Chargers scored a touchdown. Receiver Mike Williams grabbed Green’s jersey on the play, but Green was penalized.

Stefanski talked to the team about handling missed calls.

“They can say what they want to say in those moments, and it is the emotion that certainly gets us, but we can’t rely on the officials,” he said.

“Of course, it’d be easy to blame the refs, but I think it’s us,” he said. “We look in the mirror, it’s us missing opportunities and not doing the little things.”