Notes: Jeremiah Owusu-Koramoah released from hospital, flies back to Cleveland 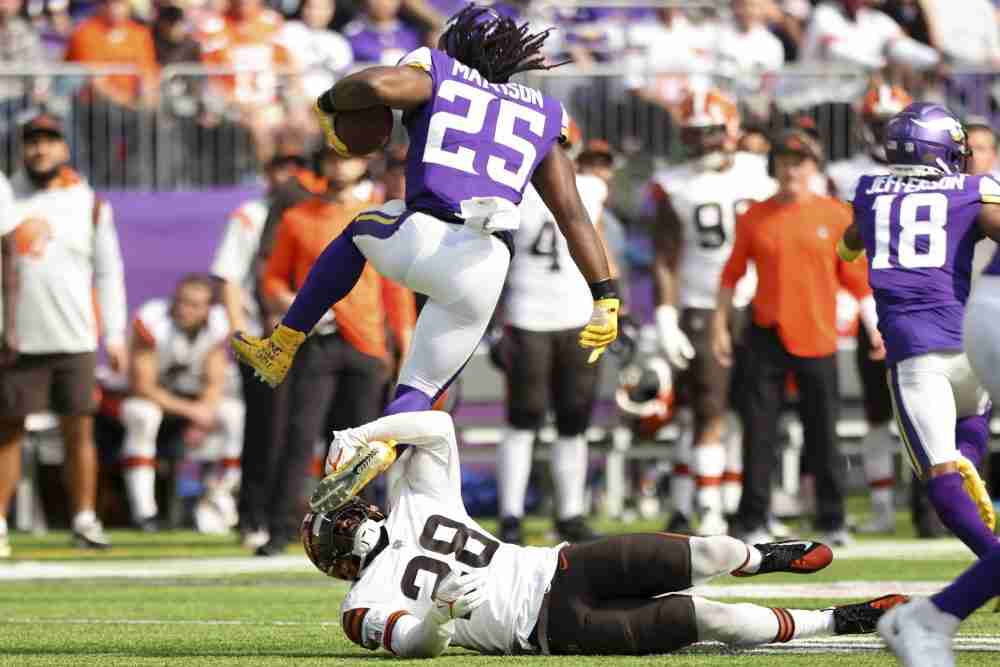 Rookie linebacker Jeremiah Owusu-Koramoah was released from a Los Angeles-area hospital Sunday night and returned to Cleveland on Monday.

He was taken to the hospital as a precaution with a throat contusion following the Browns’ 47-42 loss to the Chargers in Inglewood, Calif.

“All is well, health wise. #Week6Focused,” he tweeted Monday.

Owusu-Koramoah played 68 of 75 defensive snaps (91 percent) and had four tackles and a forced fumble. His previous high was 35 snaps (52 percent) the previous week against the Vikings, and coordinator Joe Woods said last week he had earned more playing time.

Owusu-Koramoah went to the sideline with 3:20 left in the first half after making a tackle. He removed his helmet and appeared to try to catch his breath.

Owusu-Koramoah was a second-round pick out of Notre Dame.

Bengals quarterback Joe Burrow was taken to a hospital after their game Sunday with a possible throat contusion. He was released.

Coach Kevin Stefanski said he didn’t have the MRI results after a series of injuries Sunday but didn’t rule out long-term concerns.

“I don’t think that it’d be appropriate for me to say yet. I gotta see what the MRIs say,” he said.

“It’s real tough,” running back Kareem Hunt said. “It’s not good when we’re losing some of our top guys to injuries. We just got to have the young guys ready. They’ve got to be ready to play and step in and fill big roles.”

** Stefanski said defensive end Jadeveon Clowney was inactive because his knee got sore as he warmed up. Clowney missed two days of practice last week and was listed as questionable on the injury report with an elbow injury, but the knee kept him from playing.

Clowney has dealt with injuries throughout his career, including multiple knee surgeries.

“It sucks,” defensive tackle Malik Jackson said. “Because we know how hard he works, we know how much he gets ready for the game.”

** Receiver Jarvis Landry is eligible to return from injured reserve after missing three games with a sprained knee suffered Sept. 19 against the Texans. Stefanski didn’t know if he’d be activated to play Sunday against the 5-0 Cardinals at FirstEnergy Stadium.

** He didn’t have an update on whether cornerback Greg Newsome II (calf) or left tackle Jedrick Wills Jr. (ankle) would be able to play against the Cardinals. Wills didn’t play Sunday, and Newsome has missed the last two games.

Receiver Odell Beckham Jr. was targeted only three times Sunday, catching two for 20 yards and dropping a fourth-down pass. He matched his career low for targets, set last year in the loss to Pittsburgh. The next week his anterior cruciate ligament tore on his only target vs. Cincinnati.

Beckham had been targeted nine and seven times in his first two games this season. He wasn’t thrown to in the final drive when the Browns needed a touchdown but didn’t get past their 46-yard line.

“There were a couple opportunities, but the coverage took the quarterback elsewhere,” Stefanski said. “That’s really the simple answer to it. We’ve got to make sure we find ways to get him the ball, all our guys the ball.”

Hunt is confident quarterback Baker Mayfield and Beckham will get rolling.

“Odell, he’s a soldier and he’s a beast,” Hunt said. “He just wants to win and wants to be able to do what he does. There’s no doubt in my mind that he will learn from some things he did wrong in the game, and then he did a ton of great things in the game.

“Odell’s a great teammate, a great person and a player. I feel like him and Baker will be just fine. Those guys click at practice and everything, I’ve seen it. Not too worried about it.”

Tight end David Njoku wasn’t targeted in Week 3 against the Bears and caught two passes for 17 yards last week against the Vikings. He entered Sunday with seven catches for 111 yards and no touchdowns in the first four games.

He busted out against the Chargers with seven catches for 149 yards, including a 71-yard touchdown.

“David works every day at practice, he does it in blocking, he does it catching the ball. David is just himself every day,” Hunt said. “So you just got to stay patient, there’s one football and make plays when the ball comes to us.”

Stefanski confirmed sixth offensive lineman Chris Hubbard will have season-ending surgery to repair an injured triceps. Hubbard was hurt in the opener and had tried to come back.

“It is a big loss,” Stefanski said. “He is a guy who played for us last season and gave us some good reps at tackle and at guard.

“You know how I feel about him as a person. As he is rehabbing, going to make sure that he is as close to the team so we can make sure that his presence is around, particularly for some of the young guys on the offensive line.”

Hubbard, who came back this year after a torn quadriceps and dislocated kneecap last season, posted a message on Instagram over the weekend.

“This game has taught me so many lessons in life, I know that this is a hurdle that I know that I can jump,” he wrote. “It just hurts to know that all the off-season work to get to this point is tough! I will come back stronger than before, until then I need my #Dawgpound family to hold it down! #InDueTime”

“He needs to be better, and he knows that,” Stefanski said.

** Stefanski said Blake Hance did a “fine job” filling in for Wills.

“He battled. Had some good moments,” Stefanski said.

“He tries extremely hard,” Stefanski said. “There are definitely some things that he will clean up from an assignment perspective and from a technique perspective. He has done a nice job in his moments out there.”

** Cornerback A.J. Green came off the bench to play 69 snaps.