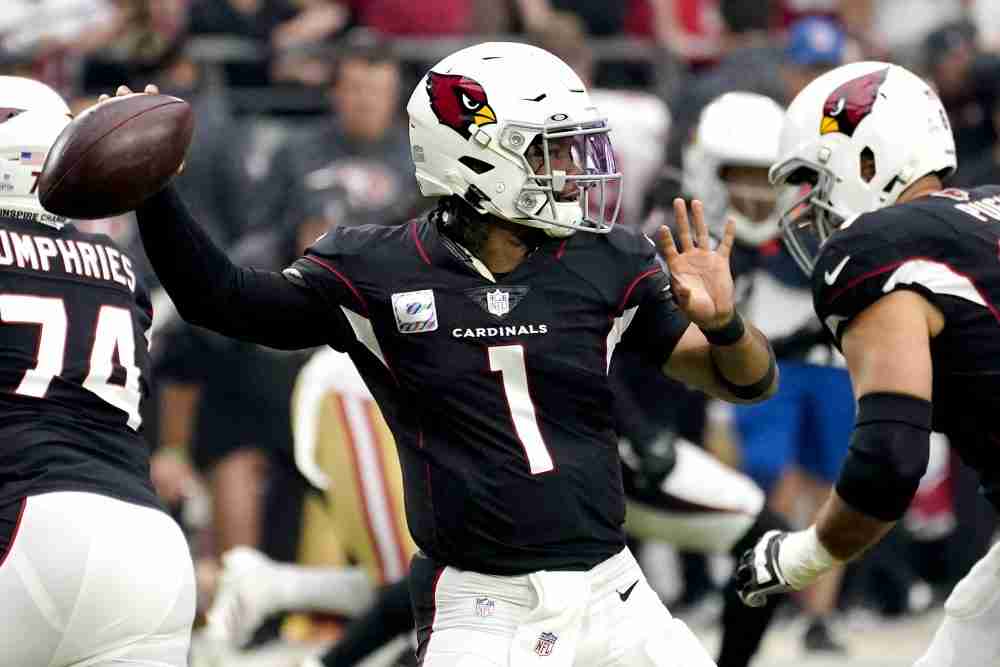 BEREA — Kyler Murray never lost a game at Allen High School in Texas. He won the Heisman Trophy in his only year as a starter at the University of Oklahoma. He was the No. 1 pick in the 2019 draft, Offensive Rookie of the Year, a Pro Bowler in 2020 and has the Arizona Cardinals off to a 5-0 start this year.

Baker Mayfield had the most success stopping Murray from terrorizing defenses. He wouldn’t relinquish the starting quarterback job at Oklahoma, keeping Murray a backup for Mayfield’s senior season of 2017.

“Kyler, it was pretty fun to have him in the same quarterback room,” Mayfield, who won the Heisman Trophy in 2017, said Wednesday. “That is obviously a tremendous player. For him to be patient while I took the extra year and did my senior lap year, it was just fun.”

“Dynamic, maybe,” Mayfield said when asked to pick one word to describe Murray. “He has all his bases covered. He is obviously a tremendous athlete, but I think he sees and understands the concepts in space a lot better than people might give him credit for. He is able to take advantage of space because he is so quick, but he is able to dissect a defense.”

Murray is undersized at 5-foot-10, 207 pounds, but he’s tough to corral, a good passer and makes big plays inside and outside of the pocket.

“He is great, and he is playing great,” coach Kevin Stefanski said. “He can move around, buy time and throw it deep.

“When he does tuck it and run, he is an elite runner. He is fast. He is quick. He has a great understanding of what they are doing offensively. He is playing at an extremely high level.”

Mayfield and the Browns lost 38-24 to Murray and the Cardinals on Dec. 15, 2019, as coach Freddie Kitchens’ one-year tenure wound down.

Murray went 19-for-25 for 219 yards with a touchdown, interception and 98.6 rating. He rushed eight times for 56 yards as the Cardinals totaled 445 yards.

The reunion is quicker than normal because of the 17th regular-season game added this season. It gives Mayfield a chance to steal away bragging rights from a close friend he sees often in the offseason.

“He might show it differently, but behind closed doors he is quite the trash talker, so do not let him fool you,” Mayfield said. “Him and I are very different personalities, but he is so, so extremely competitive. I think that is another reason why he is where he is.”

The Browns defense is dealing with injuries to the line and secondary and is bracing for the speed of the Cardinals. They play at a fast pace, Murray likes to get out in space and has targets galore in running back Chase Edmonds and receivers DeAndre Hopkins, A.J. Green, Christian Kirk and rookie Rondale Moore, who’s 5-7, 180 pounds and electric.

“It makes you have to defend the whole field horizontally and vertically,” middle linebacker Anthony Walker Jr. said. “We’ve got to stay on top of the receivers. Got to have all 11 guys on the same page flying to the ball and get the ball carrier down.”

General manager Andrew Berry made it a priority to improve the speed of the defense in the offseason to combat quarterbacks like Murray, Baltimore’s Lamar Jackson and Kansas City’s Patrick Mahomes. Linebacker Jeremiah Owusu-Koramoah was part of that plan when he was drafted in the second round.

“His speed and length. Those are the things we were intrigued by throughout the draft process,” Stefanski said.

“Everybody’s talking about it, his quickness, his agility, his ability to get from Point A to Point B, it will be tough to stop, but we’re up to the challenge,” Owusu-Koramoah said of Murray. “They have a very electrifying offense and it’s going to be a tough task, but we’re looking at the smaller details of it and focusing on us and being able to execute as best as we can.”

Mayfield said he and Murray got the best out of each other as they competed for the Sooners.

“Obviously all egos were put to the side, and we were able to do some special things,” Mayfield said. “He was able to play my senior year to put him in on some certain packages and do whatever it was going to take to win.”

Andy Janovich, M.J. Stewart Jr., Chris Hubbard placed on IR
Odell Beckham Jr. wants the ball, but he wants a championship even more and is proving it by blocking and being a decoy