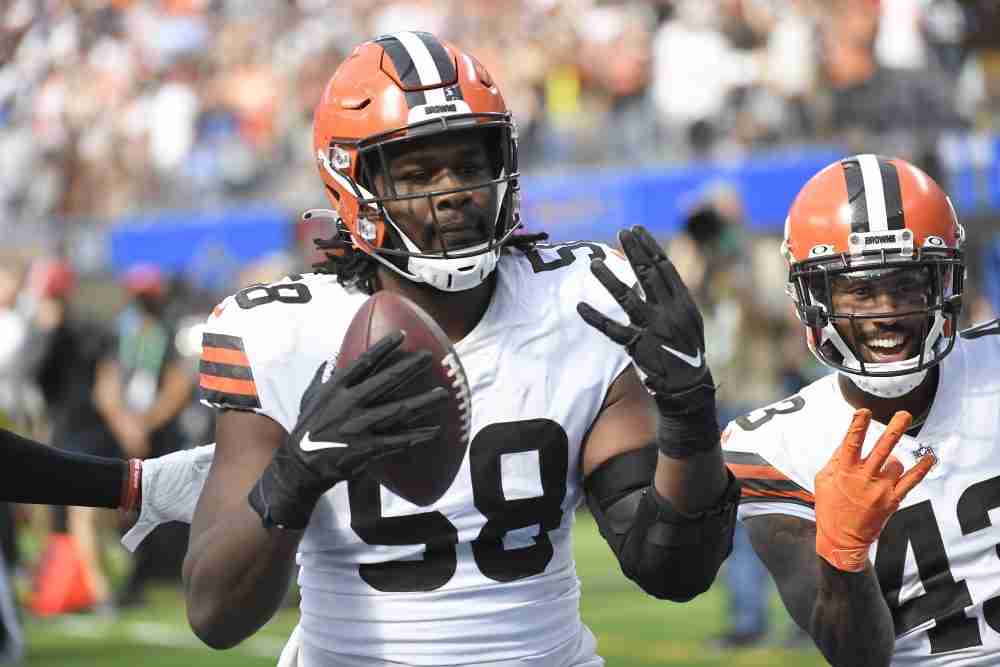 BEREA — Defensive tackle Malik McDowell was a force during his three seasons at Michigan State. He totaled 7.5 sacks, 24.5 tackles for loss and was the No. 35 pick of the Seahawks in the 2017 draft.

After a severe brain injury, multiple arrests and an 11-month prison sentence, McDowell finally made his NFL debut with the Browns last month. He’s already established himself as a key piece on a highly talented defensive line.

Despite the years away from the game, McDowell says he’s much improved over his time with the Spartans.

Despite not playing in a game since his final year at Michigan State in 2016, McDowell (6-foot-6, 295 pounds) earned a starting spot coming out of the preseason. In five games, he has eight tackles, two tackles for loss and two quarterback hits.

He might have played his best game Sunday in the 47-42 loss to the Chargers, as he recorded his first sack and first fumble recovery, which set up a field goal to end the first half.

“I was really like now they’re going to start rolling in,” he said of the big plays. “I tasted the blood, the blood in the water, I smelt it, I got there, I actually made the play.

“Now I got my feet wet, now I know what it feels like. Now it’s time to get it some more.”

Malik McDowell grateful to make team after difficult journey, vows to not let down Browns for taking chance on him

McDowell has good quickness for his size, but his game is built on power. He became an internet sensation after destroying the interior line of the Falcons in the preseason finale, including walking back the center 6 yards then dropping him on his butt.

“You can always put all the little fancy moves to the side and go back to the old-school man-on-man bull rush, it’s always fun,” McDowell said. “It’s just been my move, it’s the quickest move I feel like I can come back and I can dominate.”

Middle linebacker Anthony Walker Jr. went to Northwestern, so he knows him from the Big Ten and is used to him demoralizing guards and centers.

“He’s a freak of nature,” Walker said. “He’s been a dominant player ever since I can remember playing against him in the Big Ten. I’m just happy to see him back doing what I know he’s capable of doing.”

Defensive tackle Malik Jackson is 31 years old, has been to a Pro Bowl and won a Super Bowl. He’s helped mentor McDowell and is impressed by how far he’s come so fast.

Jackson said McDowell won the Alpha Dog of the Week award for his work at practice last week.

“It’s one of those things that it’s just nice to see him blossoming and doing what he’s doing in practice on gameday,” Jackson said. “Because he’s a dominant player and he’s only getting better.

“He definitely became a household name.”

McDowell, 25, said last week was the first time he felt like he had his legs back, which helped him stack his best practices. He said he’s learning every day and things are coming more natural.

The next step is taking his game to the next level.

“Elevating. Just always elevating,” he said. “Gotta basically just make more plays. I just want to contribute more. Being in the right spots, doing what I’ve got to do. Just learning the game more.

“I’m learning more of the game, like stances and backfields and stuff like that, I feel like that’s going to help my game. Just paying more attention on the field.”

McDowell was limited in practice Wednesday with elbow, foot and neck injuries. He left the game Sunday a couple of times but returned and played a season-high 50 of 75 defensive snaps.

After his sack, he did a “bash brothers” celebration with Jackson and drilled Jackson in the chest. McDowell went down a few seconds later and was checked by the medical staff.

“I wasn’t worried. It was just one of those pains, it took a minute for it to go away. Once it went away, I was straight.”

The Maliks on the inside are joined by ends Myles Garrett, Jadeveon Clowney and Takk McKinley to form a front with plenty of power and athleticism.

“We can be very dominant,” McDowell said. “We can be one of the most dominant teams in the league when we’re all working together. It’s really just the getting comfortable together factor right now.”

McDowell, who said he decided to bet on himself when he got out of prison, didn’t hesitate when coach Kevin Stefanski asked him to share his journey with his new teammates during training camp. He’s made peace with his past and wants to be a positive force.

“It was cool. I don’t mind sharing my story because it might help out another dude,” McDowell said. “One of my teammates, God forbid ever be in like a situation I’m in, tell ’em my mistakes so they don’t have to make the same mistakes.

“It was really something I can share and I can hopefully reach a good ear and help somebody make a good decision.”

Stefanski was part of the vetting process before the Browns signed McDowell in April.

“To just hear him explain everything to his teammates and the support that he had throughout the whole thing, how he talked about his mom and how she helped him throughout all of it, I think was really impactful,” Stefanski said.

The team meeting was on Zoom, so McDowell didn’t see the reaction until the next day.

“Everybody came up to me and gave me congratulations and talked to me and said their words. It was nice,” he said.