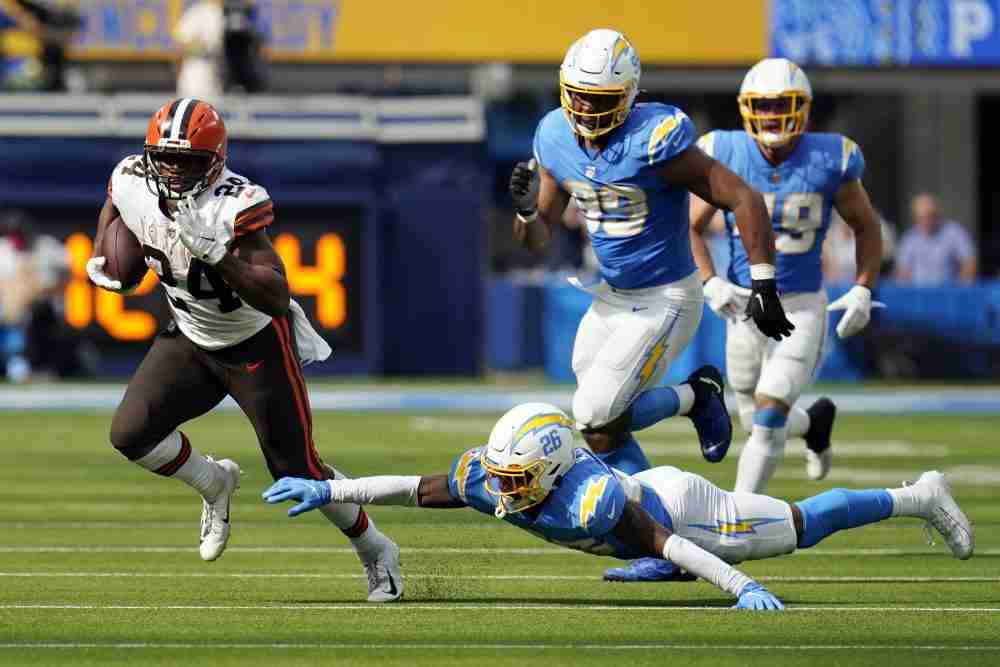 BEREA — The Browns had an all-star lineup of players on the sideline Wednesday when the practice week began.

So did left tackle Jedrick Wills Jr. (ankle), but he stopped after a few snaps, took off his helmet and spent minutes talking to Joe Sheehan, head of the athletic training staff.

Coach Kevin Stefanski didn’t rule out anyone for Sunday, when the Browns will host the 5-0 Arizona Cardinals at FirstEnergy Stadium.

Newsome has missed the last two games, and Clowney and Wills were inactive Sunday for the 47-42 road loss to the Chargers. Wills was originally injured in the opener, then was in and out of the lineup the next three games as the injury was aggravated.

“Some of it is luck, quite honestly with him,” Stefanski said before practice. “He’s gotten rolled up there a couple times, so hopefully he’s feeling strong and feeling good and we’ll be excited if we can get him back out there.”

“I don’t think we’re being cautious with any of our guys, I just think we’re trying to be smart about it,” Stefanski said.

Receiver Jarvis Landry is eligible to return from injured reserve after missing three games with a sprained knee but hasn’t been designated for return and didn’t practice Wednesday. He ran in the morning.

Clowney missed two days of practice last week with an elbow injury but didn’t play because his surgically repaired knee unexpectedly bothered him while warming up. Stefanski was asked if the knee will be a concern before every game.

“I hope not,” he said. “Obviously he has an injury history there, but that’s just with any of our guys, when they work out pregame and they are feeling something, you’ve got to go with what they’re feeling. And he didn’t feel like he could go.

Rookie linebacker Jeremiah Owusu-Koramoah wasn’t on the injury report and declared himself OK after being taken to a Los Angeles-area hospital after the game with a throat contusion. He was injured making a tackle in the first quarter but played 68 snaps (91 percent) for the game.

“My helmet kind of went into my neck and pushed it back a little bit,” he said. “It was more precautionary after the game, going to the hospital, staying overnight, making sure everything was OK, but I’m good.”

He struggled to catch his breath after the play on the sideline but quickly returned and said breathing wasn’t a problem.

“Drew is a guy who was a veteran quarterback when I was drafted here. His role was to be my mentor, and he continues to be that, even though he is not being paid by the Browns,” Mayfield said. “He is just somebody who I have a great relationship with. Just a great human being. He was just helping me out with — whether you want to call it accuracy — it was more of my fundamentals within throwing and just getting back to the basics, following through my throws and finishing towards the target. He has seen a lot of my reps and knows exactly what it is supposed to look like compared to what it was. Obviously it helped out.”

Free safety John Johnson III relayed the defensive signals to the huddle Sunday for the first time this season. He held the same role with the Rams last year.

The secondary had breakdowns on 72- and 42-yard touchdown passes from Justin Herbert to Mike Williams, but Stefanski said the change in signal callers didn’t contribute to the miscommunication.

“There wasn’t a drop-off,” Owusu-Koramoah said. “He’s a great guy. He’s a smart guy. He understands the defense as much as we do.”

Middle linebacker Anthony Walker Jr. called the plays in the first game, and linebacker Malcolm Smith took over for three games when Walker was on injured reserve. Walker returned against the Chargers but lost snaps to Owusu-Koramoah and Smith’s playing time was limited.

“It was something we had really been talking about since the spring,” Stefanski said. “We just felt like it was the right move to have John, who is out there for every rep and we know he can do it and we know he had done it.”

BACK TO THE DRAW-ING BOARD

Mayfield said he didn’t audible to the unsuccessful third-and-9 draw on the second-last drive.

“That was the original call,” he said.

Kareem Hunt was stopped for a 3-yard gain, the Browns punted and the Chargers scored the winning touchdown. Mayfield didn’t blame Stefanski for not giving him the chance to throw in the critical situation.

“It is hindsight is 20/20,” Mayfield said. “It is natural human instinct to want the ball in your hands and to have the last-play mentality, but it is over and done and we are going to move forward.”

Stefanski said the coaches continue to talk about using Chubb and Hunt on the field at the same time, but they haven’t employed the package this season.

“There are definitely different considerations with those two guys,” Stefanski said. “You want to keep them fresh. If we do it, we do not want to do it just for the sake of doing it. We want to have a good reason to do it.”

** Second-year receiver Donovan Peoples-Jones had season highs with five catches for 70 yards against the Chargers. The catches are a career high.