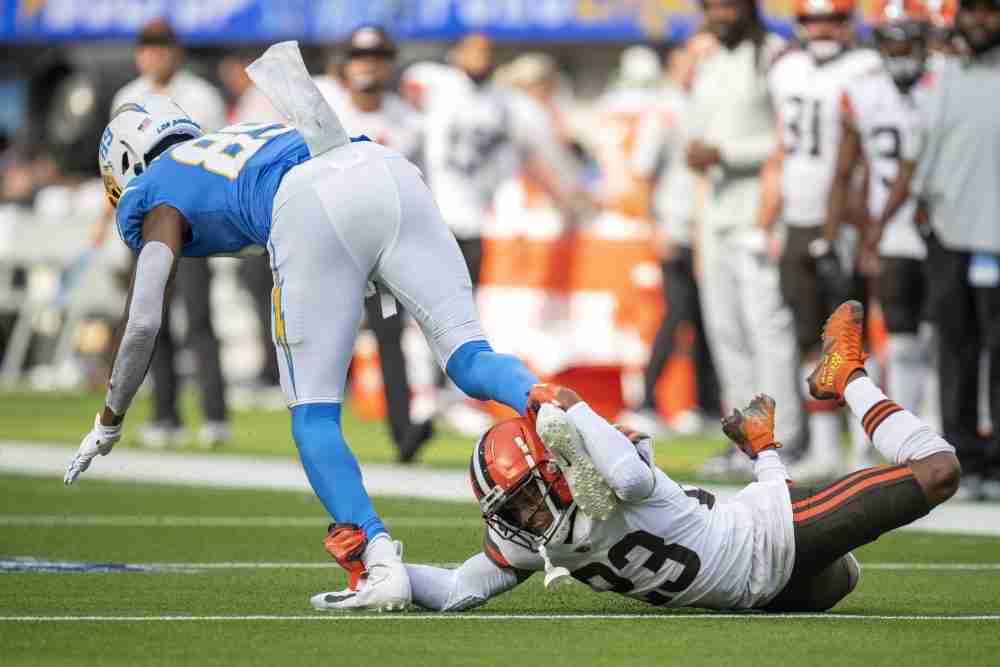 The Browns’ won-loss record in various categories this season:

When they give up 26 points in the fourth quarter, they are 0-1.


Whenever they intentionally pull an opposing ball carrier into the end zone for a touchdown, they are 0-1.

When Baker Mayfield throws for 305 yards, two touchdowns and no interceptions they are 0-1.

In games David Njoku catches seven passes for 149 yards and a touchdown they are 0-1.

But enough about last Sunday’s Sci-Fi loss at SoFi Stadium.

Sunday at Haslam Acres it’s the twice-defeated Browns vs. the undefeated Arizona Cardinals. The birds of prey are led by Kyler Murray, who in 2018 became the first University of Oklahoma quarterback to win the Heisman Trophy since Baker Mayfield won it the year before.

It’s very nearly a six-foot-and-under quarterback matchup, with the 6-1 Mayfield towering over the 5-10 Murray. A first-round pick by the Oakland A’s in the 2018 Major League Baseball Draft, Murray is the better athlete of the two, but Mayfield is the better pitchman, and has those hilarious Progressive Insurance commercials as proof.

But Browns fans are in no mood for chuckles this week. The loss to the Chargers was talk-radio gold, peppered as it was with bizarre plays and sequences, inexplicable officiating, inexplicable-er late-game play calls by Cleveland’s Golden Boy coach, and an outcome so distasteful it begged for a Hue Jackson-style jump-in-the-lake purge.

The Browns, one could argue, outplayed the Chargers everywhere but on the scoreboard. It was not an easily-digestible loss for a team starving for a signature win. They should have had one in their season opener, when they had the Kansas City Mahomes on the ropes, but failed to close the deal.

Then came wins over two cream puffs (Houston and Chicago) and an éclair (Minnesota). The game with the Chargers was a potential resume booster-turned-buster that served as a dog whistle for all the closet Browns critics who didn’t have much to complain about last year, but have been lying in the weeds during this one.

There’s a fine line between a sense of urgency and a sense of panic. There’s no reason to push the latter’s button, but a win over a good team would go a long way toward soothing a nervous Dawg Pound. The Cardinals qualify as perhaps even a better-than-good team — they are the league’s only undefeated team — with a difficult-to-contain quarterback.

Three of Arizona’s five wins have come over the Vikings, 49ers and Jaguars, who have a combined record of 4-11. However, their other two wins were blowouts over two very good teams, Tennessee and the Rams, by a combined score of 75-33.

So far, the Browns are an OK-but-not-scary 3-2 in their five games. Mayfield, the most scrutinized player week-to-week in the NFL, had his best game of the season against the Chargers. Of the other four, one was good (Chicago), two were very good (Kansas City and Houston), and the other, even though the Browns won (Minnesota), was a disaster.

The loss to the Chargers was a jarring one, because the Browns seemingly played well enough to win in certain areas, specifically, Mayfield’s 305 yards passing, a combined 222 yards rushing from Chubb and Kareem Hunt, and a whopping 531 yards gained overall. Those are all winning statistics from a team that shouldn’t have lost.

A chance for redemption comes flapping into Cleveland on Sunday, a Cardinals team that undoubtedly is feeling good about itself, even though it will be playing on the road for the fourth time in six games.

The Browns desperately need a course-correction victory, following their disorienting loss to the Chargers.

Sunday will also be a big game for Stefanski, who seemed to lose the play-calling reins late in the Chargers game, resulting in his postgame mea culpa.

Coming into this season, with all-stars at nearly every offensive position and an impressively-rebuilt defense, the Browns were everyone’s darlings. A 3-2 record isn’t ugly, but a win over the Cardinals would give the Browns what they should have gotten last week: