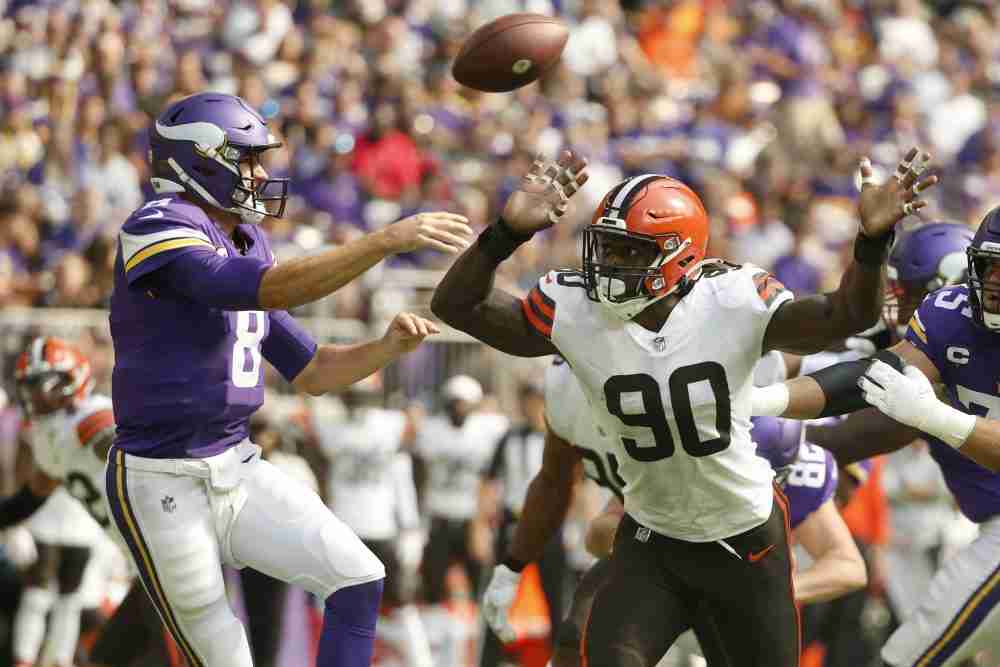 Defensive coordinator Joe Woods is optimistic he’ll have all three of the cornerbacks this Sunday as the Browns (3-2) try to slow down the high-powered offense of the Arizona Cardinals (5-0) at FirstEnergy Stadium.

Odell Beckham Jr. wants the ball, but he wants a championship even more and is proving it by blocking and being a decoy

Newsome, Ward and Williams were limited participants in practice Wednesday and Thursday, and Ward was confident he’ll play against the Cardinals.

“I’ll be good,” he said. “It’s definitely the culture, that’s what the coaches want here in the organization is guys to fight through, push through injury, if you may be hurt, want guys to build that callous and work.”

Ward, who missed three games as a rookie in 2018 and four games each of the next two years, said he was hurt Oct. 3 against the Vikings but finished the game. He started against Los Angeles.

“I just wasn’t able to go for that Chargers game,” he said.

Newsome, the No. 26 pick, hurt his calf Sept. 26 against the Bears but wasn’t placed on injured reserve. He returned to practice Wednesday and said he needed to prove to himself he was 100 percent in order to play against the Cardinals.

“I am just taking it day by day,” he said before practice. “I have not really done too many reps yet. I am just trying to build up and then we shall see on Sunday.”

He originally thought the pain was a cramp, then it kept hurting and prevented him from running. He was off to a strong start, and getting him and Ward back together would be a big boost.

“It’s huge,” safety John Johnson III said. “When we get that core 11 out there we started with, the sky’s the limit.”

The entire secondary and defense will be tested by the Cardinals. Quarterback Kyler Murray leads the NFL with a 75.2 completion percentage, adding 1,512 yards, 10 touchdowns, four interceptions, 10 sacks and a 113.0 passer rating. He’s rushed 30 times for 110 yards and three touchdowns.

The Cardinals are fourth in the league with 31.4 points a game, seventh in yards per play (6.34), eighth in rushing (128.0) and seventh in passing (285.2). Murray throws to running back Chase Edmonds and receivers DeAndre Hopkins, A.J. Green, Christian Kirk and rookie Rondale Moore.

Woods also expects to have all of his defensive ends to try to swarm Murray.

Myles Garrett (knee/ankle), Jadeveon Clowney (knee/elbow) and Takk McKinley (ankle/knee) returned to practice after sitting out Wednesday. Clowney didn’t play against the Chargers after his knee bothered him during pregame.

Clowney was a surprise inactive, but he didn’t feel he could go after working out before the game. Woods said he felt good about Clowney playing this week.

“It happens. That is why as a coach you can’t let things surprise you like, ‘Oh my god, what are we going to do?’” he said. “We addressed it, looked at our game plan, made the adjustment we needed to make, talked to the people we needed to talk to and just went out and played the game.”

Left tackle Jedrick Wills Jr. (ankle) tried to practice Wednesday after not playing vs. the Chargers but stopped after a few reps. He didn’t practice Thursday, only working on the side.

Right tackle Jack Conklin (knee), who left the game in the fourth quarter, also worked on the side. The Browns are preparing Blake Hance and rookie James Hudson III to fill in again.

** Running backs Nick Chubb (calf) and Kareem Hunt (wrist/knee) didn’t practice for the second straight day. Chubb wasn’t on the field during the portion of practice open to reporters, and Hunt worked on the side.

Punter Jamie Gillan has been a disappointment, ranking 32nd with a 41.8 average on 15 attempts.

“He needs to be more consistent. He knows that,” special teams coordinator Mike Priefer said. “That is what we are working towards. We have worked on some technique issues, but quite frankly, he just has to go out, relax and do his job.”

Priefer said Gillan will get wide with his base or take an extra jab step at times but had his best practice of the year Wednesday. Priefer doesn’t think the costly dropped snap in the opening loss to the Chiefs is still in Gillan’s head.

Woods turned up the dial on the three-safety dime package last week and isn’t turning back.

Safeties Johnson and Ronnie Harrison Jr. played all 75 defensive snaps and were joined by Grant Delpit for 23. Rookie Jeremiah Owusu-Koramoah was the lone linebacker along with the four defensive linemen and three cornerbacks. Owusu-Koramoah played a season-high 68 snaps and looks poised to replace Anthony Walker Jr. as the every-down linebacker.

“We kind of made a big jump last week in terms of what we had in our game plan,” Woods said. “It really is just moving forward completely with our dime package, so we are definitely heading in that direction. We will continue to do that for the rest of the season.”

Woods likes the versatility and speed of the dime.

Receiver Jarvis Landry hasn’t been designated to return from injured reserve despite being eligible and will likely miss his fourth straight game with a sprained knee.

Landry ran this week but hadn’t been cleared for practice. With a quick turnaround to a Thursday night game next week, the team could choose to hold him out until the game against the Steelers on Oct. 31.

Rookie receiver Anthony Schwartz has taken over the kickoff return duties, averaging 22.5 yards on six attempts with a long of 30.

“He made people miss. He has got great speed. Took a couple of hits, kept rolling and broke some tackles,” Priefer said. “I really like what I am seeing from him so far.”

** Cardinals Pro Bowl defensive end Chandler Jones was placed on the COVID-19 list Tuesday. ESPN reported Thursday two other members of the organization tested positive and one more would require it to move into intensive protocols.

** Offensive lineman Chris Hubbard had season-ending surgery to repair his triceps and said in a video on social media that it went well.

** The Browns will support the fight against cancer during the game with the “Crucial Catch: Intercept Cancer” initiative.