Nick Chubb ruled out for Sunday vs. Cardinals; Myles Garrett says Kareem Hunt “ready to go off” as No. 1 back 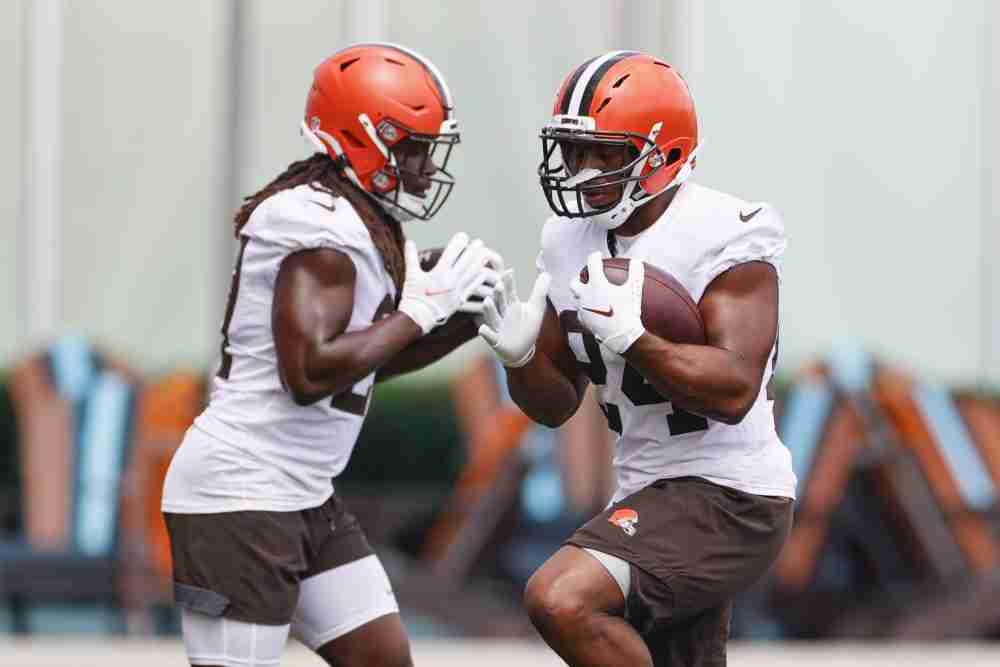 BEREA — If Kareem Hunt normally qualifies as a luxury as the Robin to Nick Chubb’s Batman, he is nothing but a necessity this week.

Chubb was ruled out Friday for the game Sunday against the undefeated Cardinals at FirstEnergy Stadium. He suffered a calf injury last week toward the end of the 47-42 loss to the Chargers in which he rushed for 161 yards and a touchdown and didn’t practice this week.

Hunt will take over as the lead back as the Browns (3-2) try to rebound and hand the Cardinals their first loss after five wins to open the season.

“Never want to see a guy like Nick go down,” Hunt said after practice. “Definitely what he means to this team is crazy, so we’ve got a lot of good backs in our RB room, I feel like we should be able to hold it down until he gets back.”

Hunt didn’t practice Wednesday or Thursday with wrist and knee injuries but returned Friday in a limited role. He was listed as questionable on the injury report but expects to play.

“It felt pretty good, so we’re going to see how it goes,” he said. “Go out there Sunday and make it happen. Feeling good enough.

“I’m excited to go out there and face a very good team.”

Defensive end Myles Garrett is excited to see what Hunt will do. He led the NFL with 1,327 rushing yards as a rookie with the Chiefs in 2017.

“Man, he’s ready to go off,” Garrett said. “He’s shown that. His first year, he led the league, so I think he definitely has it within him to have a career day if he gets a chance.”

Chubb is the primary piece in the NFL’s best rushing offense. He has 523 rushing yards — second to Tennessee’s Derrick Henry, 640 — a 5.8 average (tied for third) and four rushing touchdowns (tied for seventh). He’s been a Pro Bowler the last two years.

Hunt is the third-down back and gets series as the primary rusher. He’s carried 55 times for 295 yards, a 5.4 average and five touchdowns, and caught 17 passes for 149 yards.

“That’s a true two-headed monster there,” said Blake Hance, who’s expected to start at left tackle in place of the injured Jedrick Wills Jr. “Nick’s as good as anybody, better than anybody in the league, obviously got to get him healthy for the long haul. But with a guy like Kareem you don’t miss a beat. So we’re excited for that, even D’Ernest, we’ve got all the confidence in him.”

D’Ernest Johnson should move into the No. 2 role Sunday, with rookie running back/receiver Demetric Felton helping out on third downs. John Kelly could be elevated from the practice squad as insurance.

“That’s what those guys are here for, they’ll be able to get some reps for sure,” Hunt said of Johnson and Felton. “I’m excited to see those guys play. D’Ernest and Felton are some playmakers for sure. Our running back room, we try not to have any drop-off.”

The Browns lead the league with 938 rushing yards, 5.36 yards a carry, 12 rushing touchdowns and 51 rushing first downs. Coach Kevin Stefanski likes to control the clock and would love to do that against the high-octane offense of the Cardinals.

“It’s never one person that replaces Nick Chubb,” he said. “Obviously we feel real strong about Kareem and what he’s capable of, but guys have to step up.”

Chubb, who signed a three-year, $36.6 million extension in training camp, missed four games last year with a medial collateral ligament sprain. In 12 games, he rushed for 1,067 yards, a 5.62 average and 12 touchdowns.

Stefanski said he wouldn’t go beyond the Cardinals game when asked how much time Chubb might miss.

“He’s in good spirits,” Hunt said. “He’s going to be there for us and do whatever he can to help us.

Odell Beckham Jr. wants the ball, but he wants a championship even more and is proving it by blocking and being a decoy