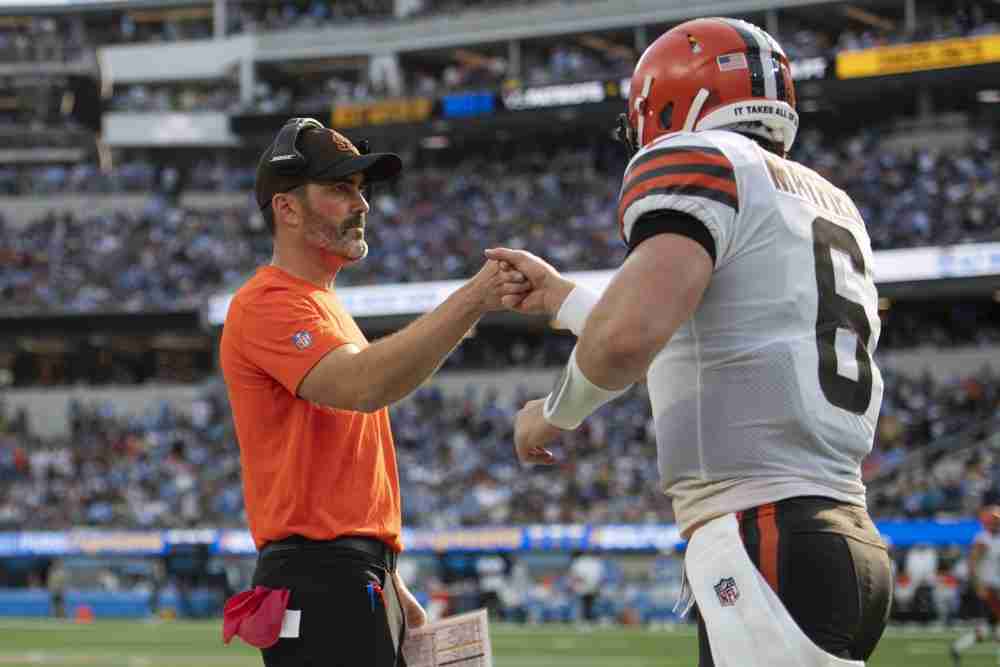 The greatest challenge to one of Kevin Stefanski’s most impressive feats as Browns coach will come Sunday at FirstEnergy Stadium in the form of the Arizona Cardinals.

In Stefanski’s year-plus on the job, the Browns have never lost two straight games in the same season. (They lost to the Chiefs in the playoffs last year and in the opener this year, but games eight months apart don’t count.)

For a team that went 1-31 in 2016-17 and had four-game losing streaks the following two seasons, the consistent ability to bounce back has been part of the culture change driven by Stefanski. It was tested in important spots last season, and each time the Browns had the answer.

The Cardinals require their complete attention. Arizona comes to Cleveland 5-0 and the only undefeated team in the NFL. It’s also the lone team with four games with at least 30 points scored and four games allowing 20 points or fewer.

“They are scoring a bunch of points on offense,” Stefanski said. “They are not giving up many points on defense. It is a really, really well-coached team. A ton of great players across the board.”

The Browns are 3-2 as they enter a stretch of three straight home games, but they must prove they’ve moved on from the 47-42 loss to the Chargers last week in which they blew a 14-point third-quarter lead. Despite season highs in points and yards (531), Stefanski the play caller and game manager drew criticism for how he handled the end of both halves, including an unsuccessful third-and-9 draw with 2:55 left that led to the winning touchdown for the Chargers.

“This is where I have to put our guys in positions to succeed, and I did not do that there, and I am sick about it,” he said.

The season’s way too early for serious pressure, but Stefanski and the Browns are feeling a level of stress as Cardinals quarterback Kyler Murray arrives. For a team with Super Bowl expectations, 4-2 would feel much better than 3-3, especially with Lamar Jackson playing like an MVP and the Ravens atop the AFC North at 4-1.

“Whether you want to call it how you handle adversity, challenges or bounce-back week and making corrections and all of that, we emphasize that,” quarterback Baker Mayfield said. “When there are mistakes and corrections to be made, you have to fix them. That is just part of doing your job. Fortunately we have been able to do that.

“We need to handle that this week obviously at a very, very high level with a great team coming into town.”

Mayfield had a personal rebound against the Chargers, completing 72 percent for 305 yards and two touchdowns, which doubled his season total. He wants bragging rights against Murray, his former University of Oklahoma teammate, but won’t get the chance against Cardinals coach Kliff Kingsbury, who tested positive for COVID-19 on Friday and didn’t make the trip. Mayfield started his college career at Texas Tech under Kingsbury but transferred when he felt disrespected.

Defensive coordinator Vance Joseph, a former head coach in Denver, and assistant head coach/special teams coordinator Jeff Rodgers will split head coaching duties for the Cardinals, who are 5-0 for the first time since 1974. Kingsbury is the play caller on offense, so the staff will have to handle the role.

They became the fifth team in NFL history with 400 yards and 30 points in each of their first four games this season.

Stefanski credited the continuity of the Cardinals coaching staff as a reason for their perfect start. Murray is the man that makes it go.

“He is a roadrunner,” safety John Johnson III. “He is just so quick and so fast. He just dances around people.”

“It’s the same story. He’s quick, he can throw, he’s fast enough to burn you on the edge if you give him a single lane,” Garrett said. “So we’ve got to respect him but we’ve also got to get after him. We can’t allow him to make those plays with his feet.

“Dude didn’t lose a game in high school, and most guys who don’t do that they end up being something in the league.”

The Cardinals are 3-0 on the road and the Browns 2-0 at home, so something’s gotta give. The Browns’ best bounce-backs last year came with a 35-30 win over the Bengals after a 38-6 loss at Baltimore in the opener, a 37-34 win over the Bengals in Week 7 after a 38-7 loss at Pittsburgh and a playoff-clinching 24-22 win over the Steelers in the regular-season finale after a loss to the Jets.

“We just have to come in and learn from our mistakes,” said running back Kareem Hunt, who will start in place of the injured Nick Chubb. “Come and get better this week to make that not happen again.”

The Browns held double-digit leads in the second half of both losses this year. They feel they’re close to finishing the job against the league’s best teams.

“For us, it is about putting that complete game together,” Mayfield said. “That is the focus right now of doing your job on all three phases — offense, defense and special teams. We have shown flashes, whether it is defensively or offensively. That is just about doing your job each week and all three phases showing up to play and doing whatever it takes to win.”