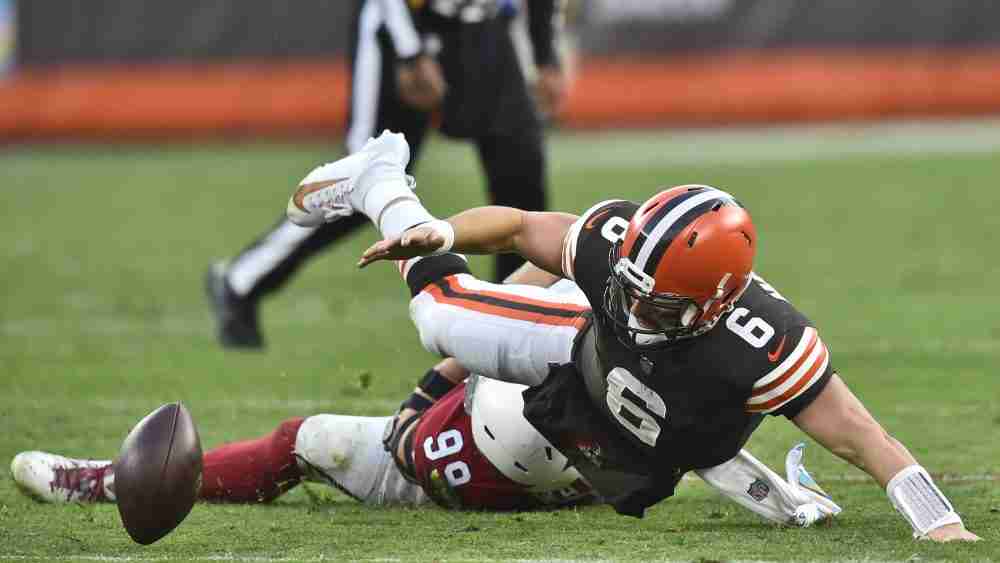 CLEVELAND — Baker Mayfield sat down Sunday night for his postgame interview with his left arm in a sling. He didn’t mince words about the latest injury to his non-throwing shoulder.

The Browns lost 37-14 to the Arizona Cardinals at FirstEnergy Stadium and will be back on the same field Thursday night against the Denver Broncos. Mayfield expects to play.

Mayfield injured the left shoulder Sept. 19 trying to make a tackle after throwing an interception against the Texans. The shoulder popped out and back in and he didn’t miss a snap.

He’s worn a harness during practice and games since, and it was revealed he suffered a partial torn labrum. He said the injury Sunday was “probably” worse.

“MRIs and stuff tomorrow, so be able to find out more,” he said. “It dislocated again and then slipped out again on a non-contact play, so just got to figure out a way to get better.”

Mayfield hasn’t missed a game since he took over in Week 3 of his rookie season in 2018, making 50 straight regular-season starts. He believes he can keep playing.

The injury Sunday came on a strip-sack by defensive end J.J. Watt. Mayfield stepped up in the pocket and tried to scramble to the left, but Watt reached out, got the ball and grabbed Mayfield’s leg. The ball popped loose and Mayfield went down hard on the left shoulder with his arm extended. He stayed down.

Players from both teams gathered and took a knee, including Watt, who did so almost immediately. But after Mayfield walked off with the left arm hanging and made two trips to the medical tent, he didn’t miss a snap.

He went 19-for-28 (68 percent) for 234 yards, two touchdowns, an interception, five sacks and a 102.4 passer rating and was replaced by Case Keenum for the final, meaningless drive.

The loss Sunday was painful in every way.

Mayfield had three turnovers — two fumbles and an interception — as the offense never got going.

On the first fumble in the second quarter, linebacker Markus Golden came free off the right side of the line, but Mayfield escaped. He extended the play, then pulled up and Golden chased him down and caused the fumble, which was recovered by end Michael Dogbe.

The interception by cornerback Robert Alford came on the next drive, as the pass was high and wide of receiver Rashard Higgins. The Cardinals turned the three turnovers into 13 points.

“You’re scrambling around, just got to find out where those extra guys are,” Mayfield said of the first fumble. “Wanted to get the ball downfield to Odell (Beckham Jr.) on a scramble drill, he was open. Just that extra half-second, trying to make a play. Just got to take care of it.

“The pick was just a bad throw. I just threw it where he was instead of where he was going to be. Then the last one, just held onto the ball.”

Analysts continue to question whether Mayfield is good enough to take the Browns to the Super Bowl, and he was outplayed by another star quarterback in Arizona’s Kyler Murray. Nobody’s doubting Mayfield’s toughness.

“Earlier in the year, he kind of had something similar and came back and fought out there,” receiver Donovan Peoples-Jones said. “He wants to be out here for the team, so he’s definitely a tough guy and a great competitor.

“We need him. He’s a big part of this team, and he keeps us going.”

Peoples-Jones caught four passes for 101 yards and two first-half touchdowns, including a 57-yard Hail Mary on a great throw by Mayfield. Beckham caught five passes for 79 yards despite leaving for part of the second quarter with a right shoulder injury.

Mayfield and the Browns must rebound quickly before Thursday night.

“It’s a huge challenge. We’ve got a lot of guys banged up now,” Mayfield said. “But it’s an AFC opponent coming in and we have to be able to bounce back and respond.

“It’s the first time we’ve lost two in a row since Kevin’s been here, so that hurts more than anything because you want to be able to fix those corrections and not make the same mistakes over again. But we didn’t do that. So we have to flush it, we have to learn from it and move forward. Just no resemblance of who we are as a team was on any sort of display today.”