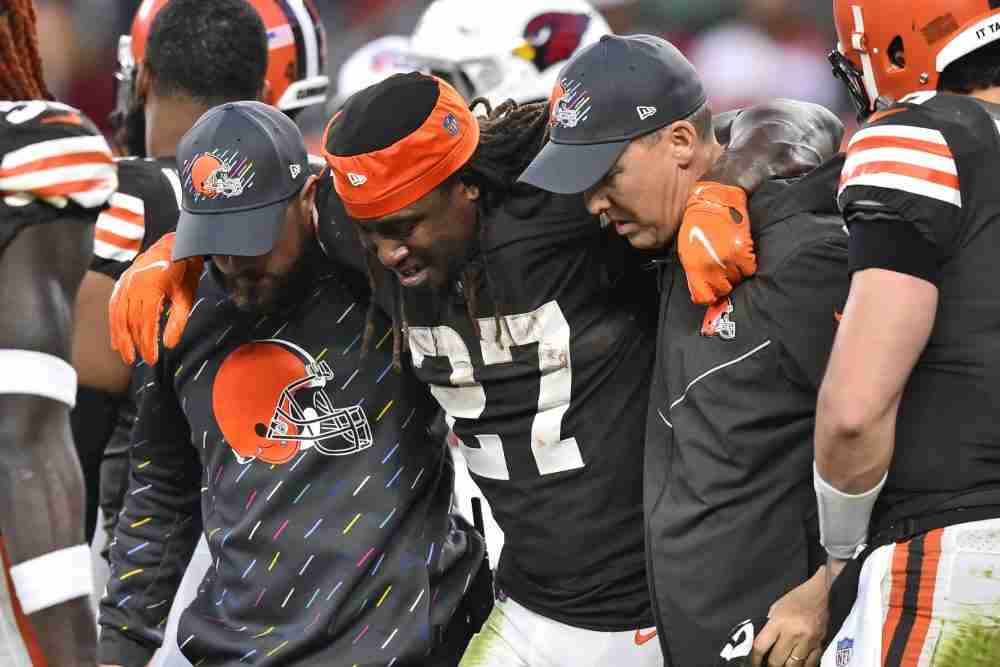 CLEVELAND — Quarterback Baker Mayfield walked out of the stadium with his left arm in a sling but vowed to keep playing.

Running back Kareem Hunt was carted off the field with what appeared to be a serious calf injury.

Receiver Odell Beckham Jr. missed time with a right shoulder injury, then couldn’t hang onto a fourth-down pass on the Browns’ final chance to stage a comeback.

In addition to being beaten up, the Browns were outplayed by the Arizona Cardinals, who improved to 6-0 with a 37-14 victory Sunday at FirstEnergy Stadium. They did it without coach and play caller Kliff Kingsbury, who tested positive for COVID-19 on Friday.

The Browns fell to 3-3 and have lost two straight in the same season for the first time in Kevin Stefanski’s two years as coach.

They don’t have much time to lick their wounds or regroup. They play again Thursday night on the lakefront against the Broncos (3-3).

“We’re not panicking by any means,” said Mayfield, who expects to play through another painful injury to his non-throwing shoulder. “We’re 3-3 and … we have 11 more games to go show who we are and play for each other and get better as each week goes on.

“Nobody makes the playoffs right now. You have to not let up and you have to peak at the right time. We will handle this correctly. We will do that, and I know that because of the guys we have in the locker room. We will get better. That is just a fact.”

The Browns are mired in the roughest extended patch in Stefanski’s terrific tenure that included leading the Browns to the playoffs and being named NFL Coach of the Year in 2020.

The offense and Mayfield are inconsistent. He lost two fumbles and threw an interception, and the Browns didn’t score in the second half and were 3-for-10 on third down and 1-for-4 on fourth down.

The defense continued to have breakdowns that led to easy touchdown passes, and allowed quarterback Kyler Murray and the Cardinals to convert six of nine third downs in the first half as they took control. The third-down conversions included distances of 6, 7, 19 and 13 yards — the last two for touchdowns.

Murray threw four touchdown passes after the Chargers’ Justin Herbert threw four the previous week in a 47-42 win over the Browns. The loud critics of defensive coordinator Joe Woods have resurfaced, but Stefanski said he’s the right person to fix the problems.

“Yes. We are a 3-3 football team, which means we are average across the board, so we all have to get better,” Stefanski said.

Arizona’s second touchdown drive included four penalties on the Browns — two pass interference calls on cornerback Denzel Ward and a face mask and unnecessary roughness on defensive tackle Malik McDowell. The players were upset with the officiating last week and griped to the officials Sunday.

“It is frustrating, of course,” said defensive end Myles Garrett, who got his eighth sack. “You can dispute the calls all you want. You are still out there. You still have to make a stop.

“It does not matter about the penalties. We cannot let that get to us or shake us. We have to step up and make a play.”

Stefanski’s play calling and decision-making have come under criticism after blown double-digit leads at Kansas City and Los Angeles and four sacks of Mayfield on fourth down this season. He continues to accept the blame.

“We were just very, very average, and that is my responsibility to get it fixed,” he said. “Really disappointed. We just have to find a way to clean this stuff up.”

The offense entered the game without running back Nick Chubb (calf), receiver Jarvis Landry (knee), left tackle Jedrick Wills Jr. (ankle) and right tackle Jack Conklin. It’s not yet known if any will be back Thursday night.

The Browns had the NFL’s No. 1 rushing attack (187.6 yards a game) through five games, but without Chubb and with Hunt already nursing wrist and knee injuries, Stefanski went with an empty backfield and threw early. He said it was because the Cardinals used big personnel, but the Browns were unable to expose them through the air. That continues to be an issue.

The connection with Beckham was better, as he caught a team-high five passes for 79 yards. But on a fourth-and-4 from the Arizona 7 with 12:10 left in a 30-16 game, he couldn’t corral the pass on a slant before cornerback Robert Alford knocked it away.

The Browns are 6-for-15 for the year on fourth down, often bypassing field goals.

“It is frustrating,” Stefanski said. “It is another one that we have to fix. We have not done a good job. I have to get guys open is the truth.”

Mayfield was sacked five times behind backup tackles Blake Hance (left) and rookie James Hudson III. The tackles allowed pressure, but Mayfield also held on too long, including on both fumbles.

“Whoever is available to us, we have to find a way. That is where we have to be problem solvers,” Stefanski said. “Those guys battled their butts off.”

The highlight was a 57-yard end-of-half Hail Mary that sent a jolt through the restless crowd. Mayfield bought time and launched a rainbow that receiver Donovan Peoples-Jones went up to catch after posting up inside the goal line. He had four catches for a career-high 101 yards and two touchdowns.

The momentum didn’t carry over, as the Browns were shut out in the second half.

“We just weren’t able to score in the beginning of that third quarter to truly change that game,” Mayfield said. “It was just one of those days. We couldn’t get things going. They had a good plan for us, and we got punched in the mouth.”

Baker Mayfield’s left arm in a sling and shoulder “feels like sh–,” but he expects to play Thursday night
Myles Garrett says “we just have to find ourselves” after defense torched again in 37-14 loss to Cardinals