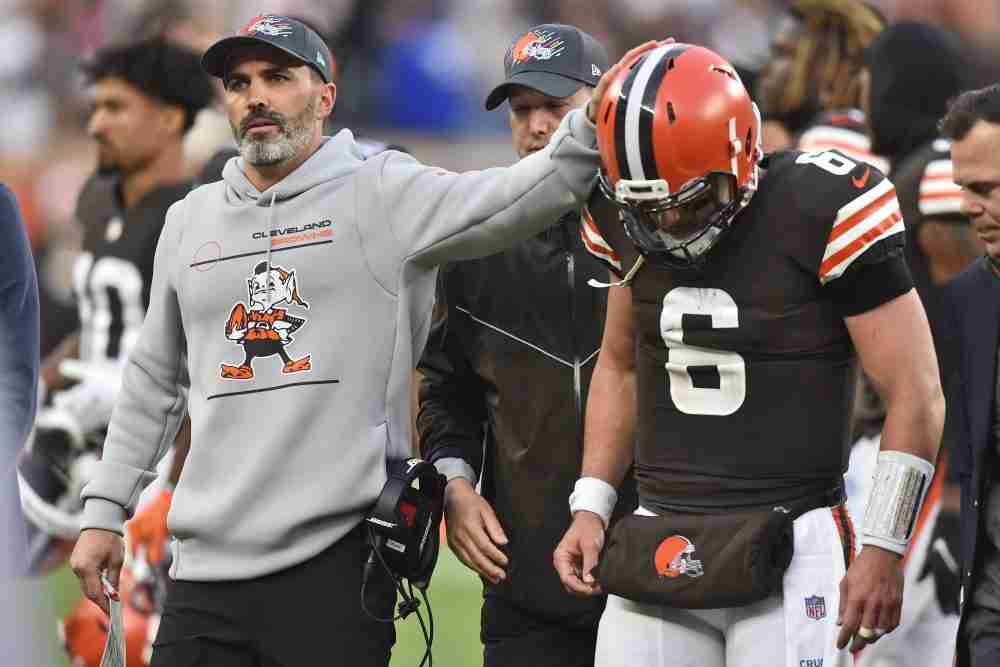 CLEVELAND — With four minutes left in the game the stadium was nearly empty, and the final play was the final indignity: Colt McCoy — yes, he’s apparently still in the league — taking a knee.

Talk about rubbing it in.

Speaking of “in,” this just in: Maybe the Browns aren’t as good as we thought — or they thought. Sunday was an eye-opener, and not in a good way. They are still just six games into the season, but the way they are playing it’s getting late early this year.

The Browns desperately need a game against a bad team because they are having all kinds of problems beating the good ones.


Sunday the Arizona Cardinals marched into Cleveland undefeated, and a few hours later they marched out still undefeated. With their coach Kliff Kingsbury not even on the premises due to COVID, the now 6-0 Cardinals basically toyed with the Browns, who spent most of the first quarter shooting themselves in the foot.

In a grim reminder of the brief but undisciplined Freddie Kitchens Era, the Browns were whistled for six penalties and 58 yards in the first quarter alone, a pace that, if maintained, would have led to 24 penalties for 232 yards.

For parts of the first half the Browns looked unprepared, undisciplined and intimated. They had nothing to lean on because their offense was sputtering and their defense, for the second week in row, was a no-show.

Counting Sunday’s carnage, the Browns have given up 84 points in their last two games, both losses, both to good teams. The Browns are supposed to be a good team, but you’d never know it by their last eight quarters.

They still haven’t beaten a good team, which continues to raise the question, how good are the Browns?

Not as good as we or they thought?

Losses to the Los Angeles Chargers and Cardinals in the last two games, and giving up 84 points in the process, begs the question. Sure, those are two elite offenses, but the Browns are supposed to have an elite defense.

“We’re a 3-3 football team. That means we’re average across the board,” said coach Kevin Stefanski. “We’ve got to lick our wounds, come back tomorrow and start getting ready for Thursday.”

It’s Denver on Thursday, two mediocre 3-3 teams. You are what your record says you are, and for much of the first half Sunday the Browns were a mess. At times they had trouble just getting through a play without being called for a penalty.

In the first half, Arizona held the Browns offense, to some, the envy of the league, to 14 points. But one of those touchdowns was a successful Hail Mary pass that covered 57 yards from Baker Mayfield to Donovan Peoples-Jones that cut a 23-7 Arizona lead to 23-14.

The glow from that thunderbolt excited the big crowd going into the half, but coming out of it the Cardinals offense continued to carve up the Cleveland defense, making all the plays that needed to be made to prevent the home team from making any second-half noise.

“Anytime you lose you’ve got a bunch of things to fix,” said Stefanski. “We’ve got to get to the bottom of this.”

There’s a lot to fix, starting with the penalties. The offense sputtered in the clutch, again, converting just four of 14 third- and fourth-down plays.

The supposed new-and-improved defense, which gave up 493 yards to the Chargers the previous week, was gashed for 352 more by the Cardinals, as quarterback and Mayfield’s former Oklahoma teammate Kyler Murray torched Cleveland’s secondary, completing 20 of 30 passes for 229 yards and four touchdowns. As was the case vs. the Chargers, receivers were frequently running unchecked and unguarded through Cleveland’s befuddled secondary far too many times.

The Browns had three turnovers, the Cardinals none. For most of the afternoon it looked exactly like what an undefeated team playing a 3-3 team should look like.

“It was one of those days. We couldn’t get things going. We got punched in the mouth,” said Mayfield, who on Monday will have an MRI on his left shoulder that got dinged again Sunday, forcing him out of the game for a few plays.

The last two weeks have been two large doses of humble pie for the Browns, who were supposed to be card-carrying members of the NFL’s muscle beach this year. But not now. Not with that record. Three and three is three and three.

“We’re going to see what we’re made of,” Mayfield said. “Our backs are against the wall.”

They still haven’t beaten a good team. It’s hard to take them seriously until they do.