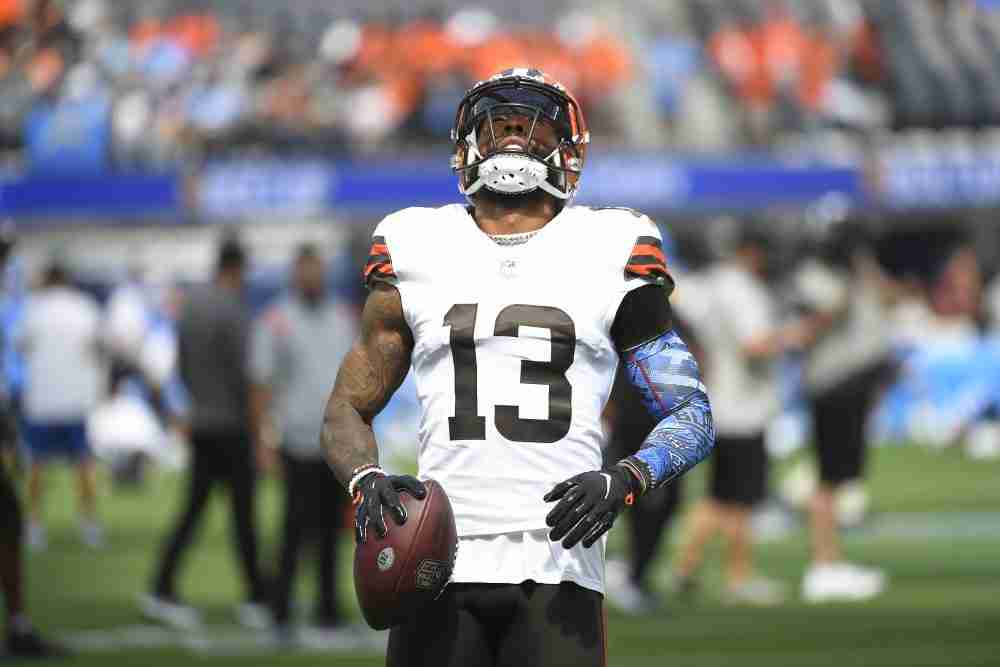 Q: The three highest-paid Browns receiving targets are Austin Hooper, Jarvis Landry and Odell Beckham Jr. Barring drastic pay cuts or reworked contracts, I don’t see any of these three being on the team next year. How wrong am I?

Yes, that trio is due big money again next year — Hooper $13.25 million, Beckham $15 million, Landry $15 million. But the roster decisions are complicated, and just because someone is making a lot of money doesn’t mean he should be cut. Let’s take each guy individually.

Cutting Hooper would bring $11.25 million in dead money against the salary cap, so I don’t see the benefit of the move. He certainly hasn’t lived up to his contract — and there’s an out after 2022 — but he’s a starting-caliber player and important in the tight end-heavy system. I expect him to stay through 2022.

Moving on from Landry would only cost the Browns $1.5 million in a cap hit, so that’s not the issue. But he’s arguably the team’s No. 1 receiver and inarguably its heart and soul. Quarterback Baker Mayfield and the offense have clearly missed him the last three games while he’s been on injured reserve with a sprained MCL. I think the organization believes he’s worth keeping, even at the steep price, but the team could seek a restructured contract.

Now for Beckham. He’s due $15 million in 2022 and the team would take no cap hit by cutting him or trading him. Obviously Beckham hasn’t had the success or impact the franchise envisioned when he was traded for in 2019. Unless that changes the rest of this season, it’s easy to predict the Browns cutting him after the season. They’d love to trade him, but I can’t see another team willing to assume the contract.

First of all, I assume you’re being facetious about Sendejo. I know the coaches thought they could trust him, but he was terrible last year and didn’t look any better Monday night with the Colts.

But your question about the big plays is certainly relevant, and I spread the blame for the three long touchdowns across the top three safeties. John Johnson misplayed the ball in the opener, allowing Kansas City’s Tyreek Hill to come down with the 75-yard TD that changed the game. Grant Delpit left cornerback A.J. Green hanging last week on the 72-yard TD to Chargers receiver Mike Williams. Delpit went with a receiver running a short route, when Green expected him to stay in the deep middle. Ronnie Harrison Jr. was the culprit on the 42-yard TD in the fourth quarter. He jumped the crossing route as quarterback Justin Herbert rolled right, allowing Williams to get behind him. Johnson said he let Williams go because he expected Harrison to have the deep right covered.

While these plays are unacceptable, I’d much rather have this trio of safeties than what the Browns had a year ago, and I trust them to clean up the operation.

A: Johnson said he’ll keep the role today against the Cardinals, and I expect that to continue beyond this week.

Johnson admitted the logistical challenges of a free safety calling the signals — he can’t get too close to the line of scrimmage and make it back to his spot in the deep middle — but he did the job with the Rams and is currently the best option.

This isn’t a knock on Walker at all.

But the coaches made the transition last week to having rookie Jeremiah Owusu-Koramoah as the every-down linebacker, including in the dime package that has only one linebacker. So if Walker’s not going to be on the field 100 percent of the time and Johnson is, Johnson should call the plays. Owusu-Koramoah is the other option, but I believe the coaches are reluctant to put even more on the rookie’s plate at this stage.

Q: I’ve noticed that the Browns continually protect virtually unknown practice squad kicker Chris Naggar every week. Is there a specific reason, other than Chase McLaughlin’s inexperience? Do you see that changing with the increasing confidence in McLaughlin?

A: I think Naggar is protected every week because of the ongoing COVID-19 concerns. If McLaughlin were to test positive and be ruled out — we’re seeing the Cardinals go through these issues this week — the Browns want to have someone on standby. And it helps if the replacement has practiced with the long snapper and holder. They did the same thing last season.

McLaughlin’s lack of experience may have contributed to the decision early in the year, but I don’t think it does anymore.

Q: I see Michael Dunn is listed as an ACTIVE guard. Is he healthy to play and would he play OT?

A: Dunn’s been healthy for a while and been active for some gamedays. The Browns have been working him in the interior, including as the No. 2 center with Nick Harris on injured reserve, so he’s down the list of options at tackle.

Q: Where is Demetric Felton?

A: Toward the bottom of the depth chart.

I know he flashed early, including the 33-yard touchdown catch in Week 2, but he’s not good enough — at least at this stage of his career — to take away snaps from the running backs and receivers ahead of him. Having said that, with Nick Chubb (calf) out today, I expect to see more of Felton in the backfield.

Q: So why take Jarvis Landry off IR if he’s not going to be active today?

A: You’re not the only one confused by this.

Landry wasn’t taken off IR on Friday. He was designated to return from IR, which opens a 21-day window for him to be returned to the 53-man roster. The designation allows him to practice.

In order for Landry to play, which could come Thursday night against the Broncos, he’ll have to be activated from IR and included on the roster.

Mailbag: Are Browns better with or without OBJ? Has team played to its potential? What’s the deal at left tackle?
Mailbag: Will Browns stop the drama and put Baker Mayfield on IR?