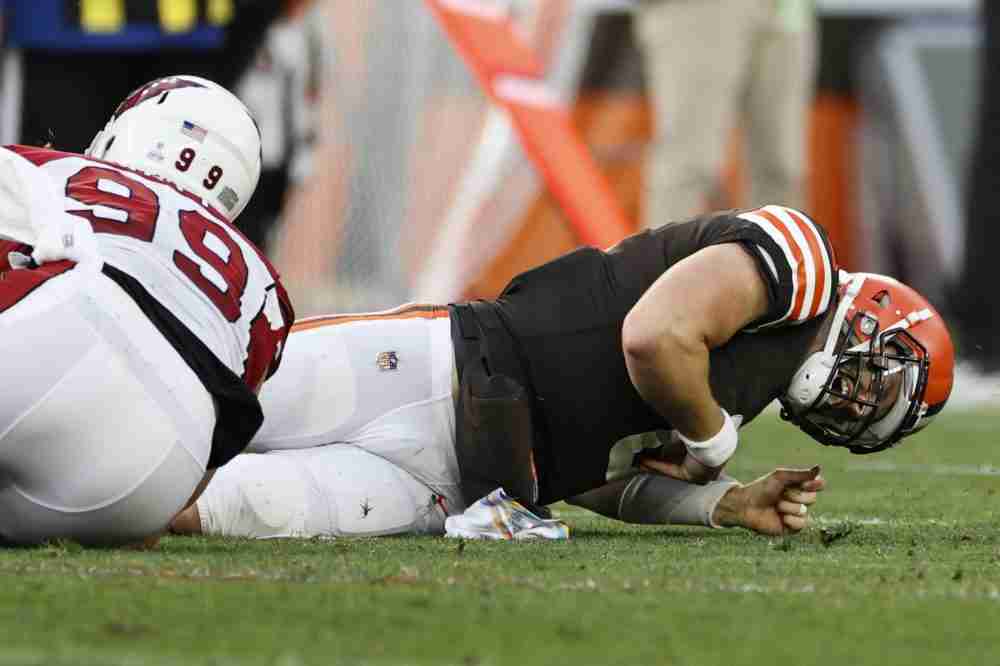 The first order of business with quarterback Baker Mayfield is to make sure his left shoulder is stable enough for him to keep playing. He already had a partially torn labrum in the non-throwing shoulder before he said it was dislocated again Sunday in the loss to the Cardinals and popped out another time without contact.

Mayfield went back in the game and vowed afterward to keep playing, but the results of an MRI or residual pain could cause him or the Browns organization to make a different decision. Coach Kevin Stefanski said Monday it was too early to say if Mayfield would be able to play Thursday night against the Broncos at FirstEnergy Stadium, or if veteran backup Case Keenum would be forced into action.

The Browns (3-3) didn’t practice Monday, but the estimated injury report indicated Mayfield wouldn’t have practiced. He left the stadium Sunday with the left arm in a sling and in a lot of pain.

“On all those type of conversations I’m going to defer to the medical staff on when a guy is ready and/or not ready,” Stefanski said. “And we talk to the players. The situation yesterday, he was deemed ready to go back in and obviously, as you saw, Baker wanted to go back in. But we will always do what’s right by our guys.”

The Browns have another situation with Mayfield that must be addressed. The Cardinals dared him to beat them through the air, and he couldn’t do it.

Of course, Mayfield isn’t alone on the field, but the Cardinals didn’t fear the passing game, and that starts with the quarterback.

Despite Pro Bowl running back Nick Chubb being inactive with a calf injury, the Cardinals stacked the line of scrimmage to neutralize the run game, which is the Browns’ identity and the best in the NFL with 168.5 yards a game, 12 touchdowns and a 5.2 average per carry. Against the Cardinals, the Browns rushed for 73 yards on 19 carries.

Left guard Joel Bitonio said the Cardinals used a 6-2 front a majority of the time, which is six defenders across the line and two linebackers a few yards behind them.

“It’s hard to run the ball on a 6-2 defense, that’s why you saw us passing the ball a little bit early in the game,” Bitonio said. “It definitely changes your mindset.

“I think we’re still going to want to try and establish the run and try and be physical up front and hopefully that opens up the passing game a little bit.”

Bitonio said the alignment wasn’t a surprise after the Cardinals employed the same front “a little bit” against the 49ers in a win the week before.

“So we go two or three tight ends, they wanted to put another big guy on the field,” he said. “We knew it was coming. But for a team to run 6-2 for a majority of snaps, they really want to take away one aspect of your game, the run game.”

Stefanski tried to counter early with empty formations and quick throws but had limited success.

Rookie right tackle James Hudson III was called for illegal formation for being lined up too far off the line, which negated a third-down completion to tight end Austin Hooper on the opening possession. On the next play, end J.J. Watt beat left tackle Blake Hance and forced Mayfield into a throw that was broken up.

The Browns moved to the 13-yard line on the second drive, but Mayfield was sacked on fourth-and-3 when his first read was covered and he didn’t have time to find Odell Beckham Jr. open on a shallow cross.

“We wanted to make sure we spread the ball around,” Stefanski said. “We felt like we had opportunities there in some of those concepts versus their bigger personnel, but I credit the Cardinals. They did a nice job.”

The Browns were down 14-0 when they got the ball again, and Mayfield started committing turnovers. He fumbled and threw an interception on the next two possessions and lost another fumble in the third quarter on the play in which he was injured. He finished 19-for-28 for 234 yards, five sacks, two touchdowns, an interception and a 102.4 passer rating.

“He’s done a very nice job taking care of the ball prior to yesterday and we had a couple too many times where the ball was on the ground or we threw an interception,” Stefanski said. “I’m not naïve enough to think it’s not going to happen at all, but we want to make great decisions, we want to throw accurate balls, we want guys to run the right route at the proper depth, all those type of things. We can teach off of them, but we’ve got to take care of the ball.

“We just were a little too careless at times.”

Hance and Hudson were filling in for Jedrick Wills Jr. (ankle) and Jack Conklin (knee). The lack of both starting tackles played into Arizona’s decision to load up at the line. It also made Stefanski and Mayfield try to get rid of the ball quickly to avoid asking them to protect for too long.

This is especially relevant given Mayfield’s injured shoulder, which is in a harness when he practice and plays and has affected his throwing at times since the original injury Sept. 19 against the Texans. He’s started 50 straight regular-season games and remains determined to keep playing.

“It speaks to how much he loves the game and loves his team that he wants to keep getting back out there,” Bitonio said. “But we can’t get him hit. Obviously if he lands on it, it’s probably not going to be great. We’ve just got to find a way to help him out and really make it so he’s living as good as he can in the pocket.”

Mayfield’s numbers are in the middle of the pack — 13th in completion percentage (67.1 percent), 18th in passing yards (1,474), 16th in passer rating (97.8), tied-25th in touchdowns (six), 12th in interception percentage (three INTs, 1.7 percent), sixth in yards per attempt (8.5) — but he was unable to lead winning drives in the final minutes of losses to the Chiefs and Chargers. The gap between the elite quarterbacks and Mayfield hasn’t closed yet this season.

He can only change that by staying in the lineup. If he’s in it Thursday, he and the offense will likely be dealing with similar issues.

Hunt is headed for injured reserve, Beckham’s status is uncertain following a shoulder injury and Chubb, receiver Jarvis Landry, Wills and Conklin might be out again.

“We are still devising that game plan, and we have to be fluid in what we do,” Stefanski said. “The truth is we may not know who is available to us for another 24-48 hours.

“That is no different than everybody in the NFL right now. You have guys who may make it to the game and may not, and that is just life in the big city.”

No flinching for defense, but plenty needs fixing, from calls to coverage discipline
Kareem Hunt, Jeremiah Owusu-Koramoah placed on IR