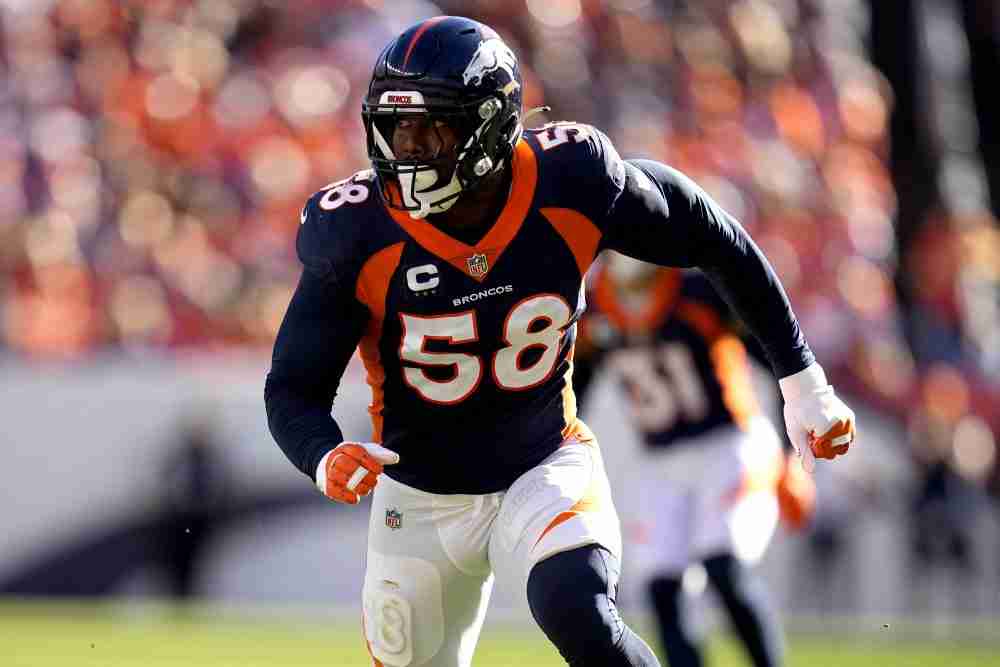 BEREA — The Browns are uncertain who their offensive tackles will be Thursday night vs. the Broncos.

Browns left tackle Jedrick Wills Jr. (ankle) has missed the last two games, and right tackle Jack Conklin (knee) didn’t play Sunday in the 37-14 loss to the Cardinals after leaving the previous game in the fourth quarter. Both worked out before practice Tuesday, according to coach Kevin Stefanski, who didn’t rule them out for the game.

“I am going to hold them out of the practice today, but they did some good work already today,” he said.

With No. 3 tackle Chris Hubbard out for the year following triceps surgery, Blake Hance played left tackle the last two weeks and rookie James Hudson III filled in on the right side. Baker Mayfield was sacked five times by the Cardinals.

Miller, who lines up on both sides, said he wants the pressure on him as the Broncos (3-3) try to stop a three-game losing streak. The Browns (3-3) have lost two in a row.

Miller, 32, is an eight-time Pro Bowler and three-time All-Pro with 110.5 career sacks. He has 4.5 this year but none in the last two games.

“If you look at this season, the first two games I had a couple of sacks and we won those games. These last three games, I didn’t do as much,” he said.

Stefanski said a lot of planning is necessary before a matchup with Miller.

“He is a special, special player. Extremely disruptive,” Stefanski said. “He gets a lot of attention from opposing offenses. Incredible bend. Just the physical skill set and traits, I do not see any difference from five, six or seven years ago with him. It is really, really impressive.”

Miller was done at Texas A&M before Browns All-Pro defensive end Myles Garrett arrived in College Station, but they have a bond.

“That’s my guy,” Miller said. “I’ve definitely got to play better than Myles this week. Myles, he’s going to make a couple of plays, as well. He’s a beast.

“I keep in touch with him. That’s just how it is when you go to Texas A&M, Aggies take care of Aggies. We’ve got a lifelong brotherhood outside of the NFL. I’m a huge fan of myles on and off the football field. I want to see him have all the success in the world for sure.”

Receiver Odell Beckham Jr. didn’t practice Tuesday after his right shoulder was driven into the ground Sunday after he made a catch. He missed the end of the second quarter but returned for the second half.

Stefanski said he has a chance to play against the Broncos.

“See if he can make it this week,” Stefanski said. “We will get a better understanding today.”

** Linebacker Malcolm Smith (abdomen) returned in a limited role after not practicing or playing last week.

** Defensive tackle Jordan Elliott (neck) was added to the injury report as a limited participant.

Newsome could regain his starting role from Greedy Williams this week. Newsome played 21 snaps vs. the Cardinals off the bench after missing two games.

“Greg was on a little bit of a pitch count last week,” Stefanski said. “I think he is doing better so we will see.”

** The Broncos didn’t practice but estimated their injury report for a second straight day. Quarterback Teddy Bridgewater (foot) was listed as limited, but coach Vic Fangio said he expects him to play.

He sustained a high right ankle sprain in the fourth quarter against the Cardinals when he stepped up to tackle running back James Conner and his leg got caught under his body.

Owusu-Koramoah, a second-round pick out of Notre Dame, started five of six games and totaled 29 tackles, four passes defensed, a forced fumble and a half-sack. His role increased as the year progressed, and the last two games he served as the every-down linebacker.

“He said we have to get it together. Giving up 80 points in two weeks is unacceptable,” Jackson said, referring to the 47 scored by the Chargers and the 37 by the Cardinals. “No matter what position we’re put in, if we want to be great we have to make stands and push people back and leave no points on the board. Just be exactly who we need to be and be consistent and play together. No MEs (mental errors).”

No flinching for defense, but plenty needs fixing, from calls to coverage discipline

“He takes that part of his job very seriously,” Stefanski said. “I think it is natural for him. Every once in awhile, you have to hear from the big guy.”

Stefanski was quarterbacks coach for the Vikings when former Browns coach Pat Shurmur was offensive coordinator. Shurmur is coordinator for the Broncos.

“A great friend. Extremely instrumental in my development as a coach,” Stefanski said.

** Stefanski didn’t begin studying the Broncos until after the Cardinals game. “I try not to cross streams, if you will,” he said. Some of the assistant coaches got a head start.