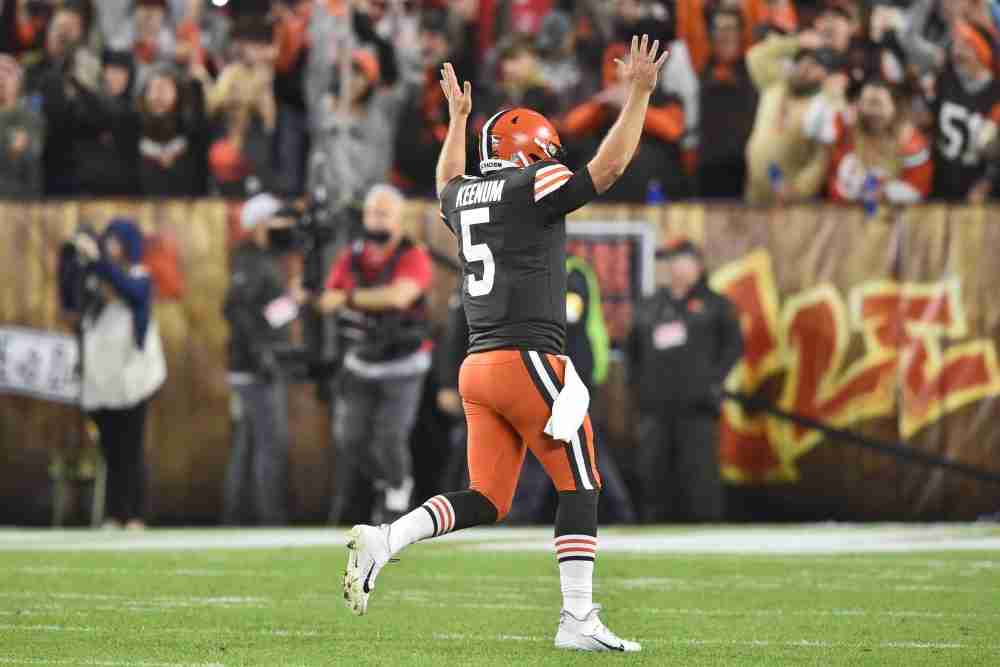 The Browns were reduced to replacements at several key spots Thursday night, but that didn’t stop them from securing a much-needed victory.

The Browns (4-3) started fast and held on to beat the Denver Broncos 17-14 at FirstEnergy Stadium. The win stopped the first two-game losing streak under second-year coach Kevin Stefanski.

“We had to keep the dream alive. We definitely could not go under .500,” said defensive end Myles Garrett, who had 1.5 sacks to raise his league-leading total to 9.5. “It was a big game for us. The rest are all big now because of our little slide that we had.”

Quarterback Case Keenum looked like the veteran he is, running the operation smoothly and throwing for 199 yards and a touchdown in his first win as a starter in more than two years.

Running back D’Ernest Johnson looked like a capable starter in his first NFL start, rushing 22 times for 146 yards, a 6.6 average and a touchdown.

And the defense, which was asked to carry the load with fewer injuries than the offense, rebounded from a pair of disastrous performances. After giving up 84 points in losses to the Chargers and Cardinals, it held the Broncos to 223 yards, although they had two long touchdown drives in the second half.

“We do not want to be a first-half team,” middle linebacker Anthony Walker Jr. said. “We want to play a complete game.”

The Browns were desperate for a victory of any kind.

They had fallen to 3-3 and last place in the AFC North, and the Super Bowl expectations of the preseason seemed a lot less realistic. If they had dropped below .500, the road to the playoffs would’ve been a steep climb.

The Browns didn’t let that happen despite having 19 players on the injury report during the week, not including Hunt (calf) and Owusu-Koramoah (ankle), who were put on injured reserve Tuesday and must miss a minimum of three games.

Mayfield told Fox’s Jay Glazer he has a broken bone in his left (non-throwing) shoulder to go along with a completely torn labrum. He still hopes to play Oct. 31 against the Steelers, but the swelling and pain must improve by then.

Stefanski told his team to fight, scratch and claw for a win, and that’s exactly what it did. Receivers Jarvis Landry (knee) and Odell Beckham Jr. (shoulder) and left tackle Jedrick Wills Jr. (ankle) were among the injured who managed to play.

“That is a great team win. I am really proud of the guys for fighting like crazy to get to this game,” Stefanski said. “Guys who were pushing through those injuries, it was just incredible to see these Thursday night games and what they put their bodies through.”

A couple of aggressive decisions by Stefanski also played a key role.

He’s a strong believer in analytics but went against the data and his pattern and chose to take the ball after winning the coin toss. He said he thought the wind could be a factor in the second half, but he also must’ve liked his script of plays.

The Browns marched 75 yards in five plays and 2:40. Tight end Austin Hooper went 34 yards with a screen, and Johnson rushed three times for 34 yards, including a 4-yard touchdown, the first of his three-year career.

“When Kevin told me that if we won the toss we were taking the ball, I was like, ‘Let’s go,’” said Keenum, whose last win came with Washington in 2019. “I felt calm and poised. It was a great first drive there. That kind of broke the seal and broke the ice.”

Chase McLaughlin made it 10-0 on the next drive with a strong 52-yard field goal into the wind and the Dawg Pound.

After the Broncos cut the lead to 10-7 with a 13-play, 79-yard touchdown drive that took 7:12 to open the third quarter, Stefanski went for it on fourth-and-3 from the Denver 6-yard line. The 33-year-old Keenum scrambled up the middle for 5 yards.

“I looked right and should have looked left and Juice would have scored,” Keenum said of Landry. “But as I went through my check-down, felt a pretty big opening there and tried to score. Not really thinking, just reacting at that point.”

#Browns Kevin Stefanski on going for it on 4th-and-3 that Case Keenum converted with scramble. pic.twitter.com/lRNX6mUyTN

“In these scenarios, you believe in your guys,” Stefanski said of going for it despite being 6-for-15 on fourth down in the first six games. “We are doing it because we think we have a chance of getting a first down in that situation and a chance to get seven points in that situation, and as you saw, that was important.”

Keenum threw a 1-yard touchdown to fullback Johnny Stanton IV on the next play for a 17-7 lead with 27 seconds left in the third quarter.

Keenum, who made his 63rd start but first in two years with the Browns, said Wednesday he was “very ready” for his big moment and “built for” being called on in a pinch. He looked like it despite not taking any full-speed reps with the first team during practice this week.

He moved the chains with short passes and piled up the first downs. He went 21-for-33 for 199 yards, a touchdown and a 90.3 passer rating. He rushed three times for 8 yards.

“You do not dwell on the past, but you learn from it,” Keenum said. “I have been through it and a lot of it.”

“Case fought like he always does,” Stefanski said. “I thought he orchestrated the operation. He took care of the football.”

Keenum and Johnson finished the victory with a drive that took the final 5:12 after the Broncos had pulled within 17-14. Keenum completed both pass attempts, and Johnson did the rest, rushing seven times for 52 yards.

“The last drive was very frustrating,” Broncos coach Vic Fangio said after their fourth straight loss. “We were loaded up for the run and they blocked us and ran it. We could not stop them.”

“D’Ernest Johnson to me is a warrior and a great teammate,” Stefanski said. “What he has fought through in his career and then to go have a night like that and to end it how he did on that down, I thought was just outstanding.”

Landry, who returned after missing four games with a sprained left medial collateral ligament, caught the first pass and finished with five catches for 37 yards. He limped off with about three minutes left when he aggravated the knee injury after making his final catch but returned.

He and receiver Odell Beckham played together for the first time since Oct. 25, 2020, as Beckham fought through a right shoulder sprain. Beckham was in pain after diving for a pass along the sideline toward the end of the first half and landing on the shoulder but returned for the second half.

He caught two passes for 23 yards. He also had a drop, an illegal formation penalty and slipped on another play in which the ball hit him in the shoulder.

McLaughlin’s 41-yard field goal attempt in the other direction with 1:50 left in the first half was blocked by defensive end Shelby Harris. McLaughlin had made his first 10 field goals this year, along with all 16 extra points.

Denver had only 69 yards and two first downs and went 0-for-4 on third down in the first half.

Broncos edge rusher Von Miller left the game late in the first half with a sprained ankle and didn’t return. He collided with defensive end Dre’Mont Jones, a St. Ignatius graduate. Miller said Tuesday he was “going to kill” the Browns tackles but was held to one quarterback hit by Wills and backup right tackle Blake Hance.

Browns cornerback Denzel Ward exited in the fourth quarter with a hamstring injury and was quickly ruled out. Greedy Williams replaced him.

“Nobody flinched in our locker room and everybody stepped up,” Walker said. “Guys made some huge plays out there. We are a bunch of competitive, tough guys in the locker room, and I am proud to be a part of this team.”