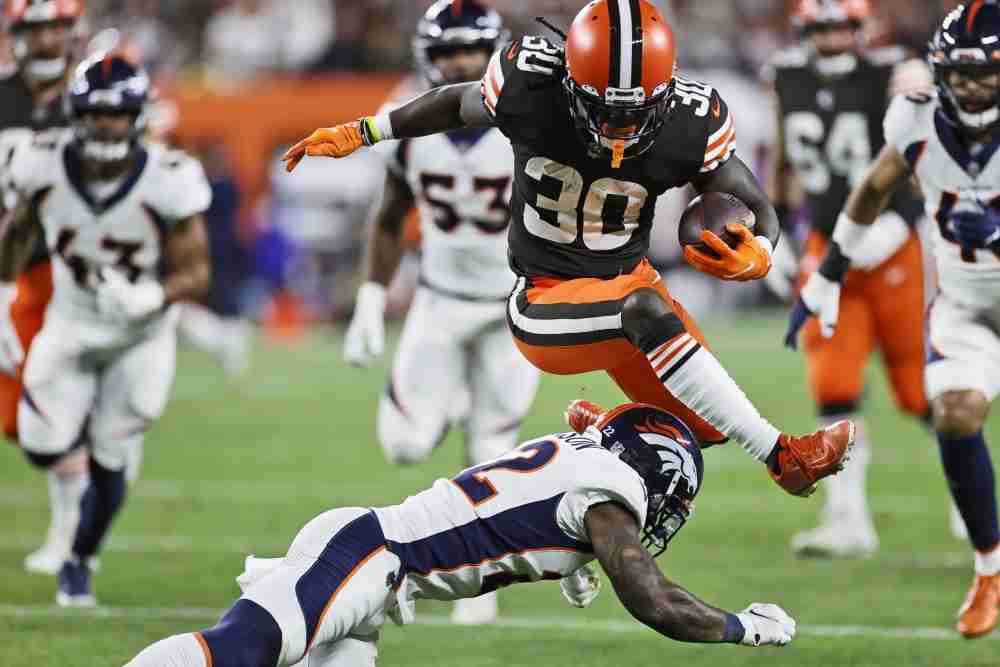 He made the most of his opportunity and played a huge role, rushing for 146 yards and a touchdown in Cleveland’s 17-14 win over the Broncos at FirstEnergy Stadium on Thursday evening.

Johnson entered the game with 198 career rushing yards. His previous high game was 95 yards against Dallas on Oct. 4, 2020.

“I never lost trust in the process,” said Johnson, who went undrafted out of South Florida in 2018 and bounced around from working on a fishing boat in Key West, Fla., to the Alliance of American Football and finally the Browns.

“Coming from the fishing boat, I always dreamed of playing in the NFL,” he said. “Just playing in the AAF, at the same time I always dreamed of being here, and being able to just be on this team is a blessing. It’s always a dream come true just to be here and be able to play and start and come out here and help the team win, that’s the best feeling.”

“I’m so proud of you guys for fighting…for 60 minutes”
🗣 Kevin Stefanski pic.twitter.com/ilb1RqeNKe

Cleveland has the NFL’s best rushing attack, averaging 168.5 yards through the first six games and adding 182 against the Broncos. But the two workhorses primarily responsible for that gaudy total were unavailable because of injury. Nick Chubb was inactive for the second straight week with a calf injury but still ranks second in the league with 523 rushing yards.

Kareem Hunt suffered a “significant” calf injury against Arizona on Sunday and will miss at least a month. The Northeast Ohio native ranked No. 14 in the league with 361 rushing yards.

Johnson filled in admirably, wasting no time showing he was up to the task by blasting through the left side of the line for a 20-yard gain on the third offensive play. He followed that with a nice cutback for a 10-yard gain up the middle, setting up his 4-yard touchdown run to give the Browns a 7-0 lead at the 12:20 mark.

His big game drew praise from a number of high-profile athletes on Twitter, including LeBron James.

D’ Ernest Johnson on 1 tonight!! Love to see it! #Browns

Johnson averaged 6.6 yards on 22 carries. The only other player to receive more than two carries was quarterback Case Keenum, who started in place of the injured Baker Mayfield. Johnson was critical in helping Cleveland milk the clock in the fourth quarter, rushing for 20 yards on a play that clinched his first 100-yard game in the NFL.

Johnson wasn’t done, helping the Browns finish off the Broncos by plowing through two defenders on a 7-yard run to convert a third down with 2:27 remaining. He carried the ball three more times — technically four, but his first third-down conversion was negated because of an illegal motion penalty. It didn’t matter, as he came right back with an 8-yarder for the clinching first down.

#Browns RB D’Ernest Johnson on being able to run out the clock. pic.twitter.com/kuLTrbk9PB

“Unexplainable,” Johnson said of his first 100-yard game and first touchdown. “I wanted to celebrate but I didn’t know what to do. I just yelled because it’s been a long journey. To get your first start and get a 100-yard game, get that touchdown, that ain’t nothing but God. I give thanks to him.”