Jim Ingraham: Separated at worth? No difference in Browns QBs Baker Mayfield and Case Keenum 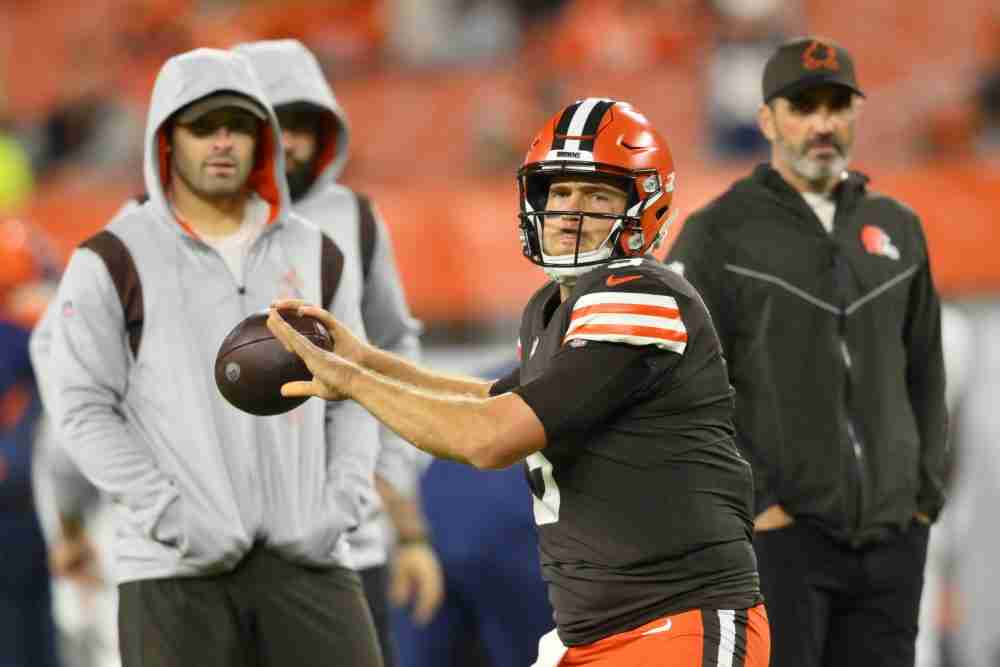 If you’re wondering how things went so smoothly at the quarterback position in the Browns’ win over Denver last week, here’s one possible explanation: Baker Mayfield and Case Keenum are the same quarterback.

They were both born in Texas: Mayfield in Austin and Keenum 200 miles away in Abilene.

They both weigh 215 pounds.

Mayfield has 26 career wins as a quarterback. Keenum has 28.

Both are supremely confident, scrappy playmakers.

Neither is very fast or elusive.

Both have a strong leadership gene.

This sameness perhaps smoothed the transition from Mayfield to Keenum in the win over the Broncos. That sameness may also come in handy over the remainder of this season, because there is the potential for some back-and-forth at the quarterback position, given the one major difference between Mayfield and Keenum: Mayfield has a torn labrum and broken bone in his left shoulder. Keenum does not.

Mayfield, however, seems determined to get back into the lineup as soon as possible, which exhibits admirable toughness on his part, but also accelerates his next exit from the lineup, following what seems to be the inevitable sack or scramble-inducing trip to the injury tent to put out another fire in his shoulder.

It’s an injury that will stay with him until it’s surgically repaired, which would end his season, a notion “Gamer” Mayfield probably views with the same enthusiasm he’d have for a private, sit-down dinner-for-two with Hue Jackson.

That the Browns are playing Pittsburgh this week probably intensifies Mayfield’s lust for wanting to be back in the huddle Sunday. That would mean Keenum would be back on the bench.

One doesn’t require much of an imagination to foresee the possibility, for the remainder of the season, wherein Mayfield plays until his shoulder starts barking again, then Keenum takes over for a game, then Mayfield returns, and the cycle is repeated.

Allowing the Browns’ season to hinge on the pain threshold of their No. 1 quarterback seems like a shaky enterprise, one that it would be hard for any conscientious organization to rubber stamp.

Fortunately for the Browns, Baker’s backup is a Baker clone. A gym rat — to borrow a basketball phrase — who has played his career with as large a chip on his shoulder as Kid Labrum has on his.

The biggest difference between Mayfield and Keenum is how the industry viewed them coming out of college. In 2018, Mayfield was the first of 256 players selected in the seven rounds of that year’s NFL Draft.

In the seven rounds of the 2012 draft, 253 players were selected, but none of them was named Case Keenum. He went undrafted in a year in which 11 quarterbacks were selected, starting with Andrew Luck, who was the first overall pick. Robert Griffin III was the second pick and Ryan Tannehill was the eighth overall pick.

With the 22nd pick in the first round, the Browns, un-astutely, selected Brandon Weeden.

Neither one, nor any of the quarterbacks taken in between, was Case Keenum, who signed with Houston as an undrafted free agent. Today, nine years and six teams later, he is in his 10th season in the league, most of them as a backup quarterback. This year he is the backup to a quarterback who is the same height, weight and cockiness as he is.

If Mayfield can’t start against the Steelers, then Keenum will. If Mayfield decides he can live with the pain, he’ll be the Browns quarterback the rest of the season, or until he tweaks his shoulder again.

Then Keenum will take over, but unless you look closely, you may not know it.

Because they are the same quarterback.