D’Ernest Johnson’s life changed with a call on his way to yoga, and now he’s inspiring others not to give up on their dreams 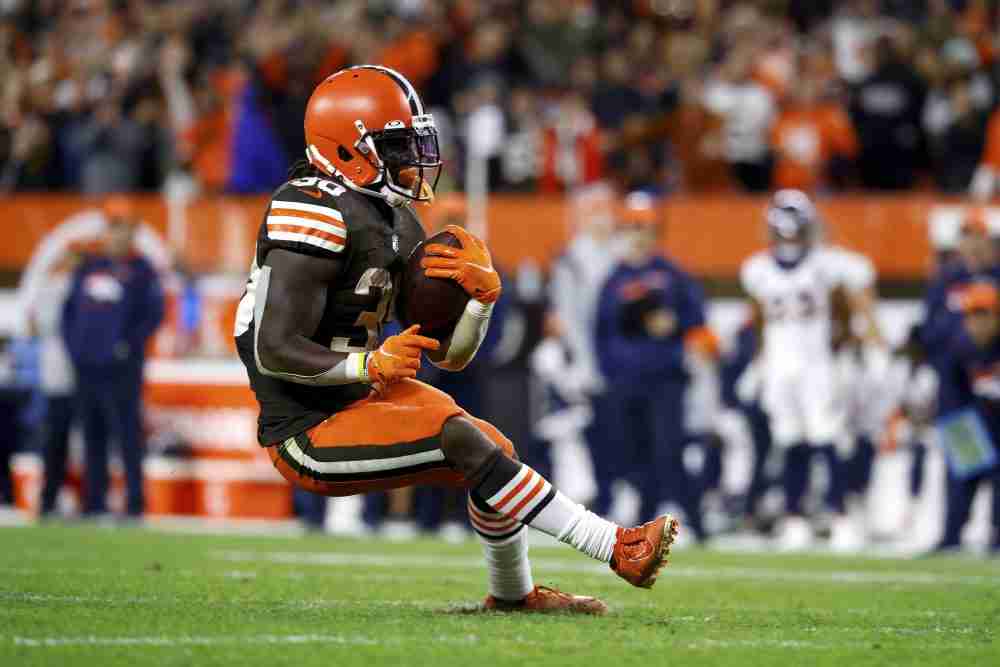 BEREA — D’Ernest Johnson didn’t know what to do when he scored his first NFL touchdown, on a 4-yard run, Oct. 21 against the Broncos, so he just yelled in front of the Dawg Pound.

With more than a week to think about a return to the end zone, he’s settled on a celebration that captures his improbable journey to the NFL and his special relationship with teammates.

“Hopefully I can get the team together and just toss them a ball and I can just act like I’m reeling in a fish,” Johnson said Thursday. “That would be something nice.”

The long and winding road to the Browns included a terrible time in the 40-yard dash, a year out of football, a month fishing for mahi mahi in Key West, Fla., and unanswered direct messages to teams in the now-defunct Alliance of American Football.

He was determined to never give up, kept pursuing the NFL dream and got the fateful call from the Browns in 2019.

#Browns RB D’Ernest Johnson on getting call from Browns in 2019. pic.twitter.com/kcyf7Tx2wE

“Me and my girl, we were driving to yoga and that’s when somebody from the Browns called and said, ‘Do you mind getting on a plane at 2?’” said Johnson, who was in Gainesville, Fla. “It was like 10 o’clock in the morning and I said, ‘I don’t mind,’ and we turned the car around and I just packed a backpack of overnight clothes and came up here for a workout, and they ended up signing me and that was it.”

Baker Mayfield practices for 2nd straight day with goal of starting vs. Steelers

He made the team as a core special teamer and backup running back and has stuck for three years despite greater roster competition. He became a household name with 146 rushing yards, a 6.6 average and the touchdown in the 17-14 win over the Broncos in his first NFL start.

Despite the absence of Nick Chubb and Kareem Hunt with calf injuries, the league’s top-ranked rushing attack didn’t miss a beat.

“I had tears in my eyes after that last game,” special teams coordinator Mike Priefer said of coach Kevin Stefanski giving Johnson a game ball in the locker room. “He has been through so much and he has worked so hard. He has done a great job for us on special teams.

“He was outstanding. All I told him during the week was just do your thing and protect the ball, and he did all of that and more. I was real proud of him.”

Johnson (5-foot-10, 208 pounds) is expected to be the No. 2 back Sunday against the Steelers, as Chubb returned to practice this week after missing two games. Chubb called Johnson “lovable” Wednesday when explaining why his teammates were so happy for his success against the Broncos.

“He’s a great back, one of the best backs in the league. I’m just going to continue to follow in his footsteps. That’s what I’ve been doing this whole season is just studying him and Kareem, just picking little things to put into my game. When I get my opportunity, just got to go out there and make the most of it.”

He did just that last week and received a ton of attention. Someone even started a fake Twitter account.

“It’s been crazy,” Johnson said. “Lot of people been DM-ing me and writing me, just telling me how I’m an inspiration to them and how I motivate them from my story just to keep going and not giving up when you get turned down.

“I just try to inspire everyone, no matter what, don’t take the word ‘no’ for anything. Just keep going and keep pushing, because eventually something great is going to happen.”

When the DMs to AAF general managers didn’t work, Johnson got the phone number of the Orlando GM and called every day until he got a tryout. His first tryout with the Browns didn’t end with a roster spot, but he made a strong enough impression on running backs coach Stump Mitchell and Priefer to get the call on his drive to yoga class.

“It’s definitely a lot of patience that went in, I’m just thankful to be here now,” Johnson said. “I don’t take this game for granted at all. I embrace anything.”

Priefer said the breakthrough performance against the Broncos exemplifies the organization’s philosophy of next man up.

“That was kind of a really, really good thing for our organization,” he said. “For the rest of the players to see that, what that guy has been through and to compete and to play so well to help us win that game was a really cool thing.”

Receiver Jarvis Landry wasn’t surprised because he’d watched Johnson in practice and last year against the Cowboys, when he rushed for 95 of his 198 career yards entering last week. But Landry said an outing like the one against the Broncos “makes you love this game. That’s part of what this game is about.”

“He is really low to the ground. He is tough to find,” Van Pelt said. “He gets in behind those linemen with the low pad level, and he always seems to be falling forward — that is the big thing.

“Understands the wide zone game really well. He is very patient before he puts his foot in the ground.”

Johnson rushed for 1,796 yards and 16 touchdowns at the University of South Florida but went undrafted after running a 4.8-second 40 at his pro day. He hasn’t been timed since.

Nobody questions Johnson’s ability to succeed in the NFL anymore, but he isn’t satisfied.

“It’s good that everybody noticed the hard work I put in and stuff, but I still have a lot more work to do,” he said.

He’s scheduled to become a restricted free agent after the season and could command a long-term contract elsewhere.

“I’m not wandering. I’m just focused on this season and focused on getting ready to play Pittsburgh, that’s where my mind’s at,” he said.