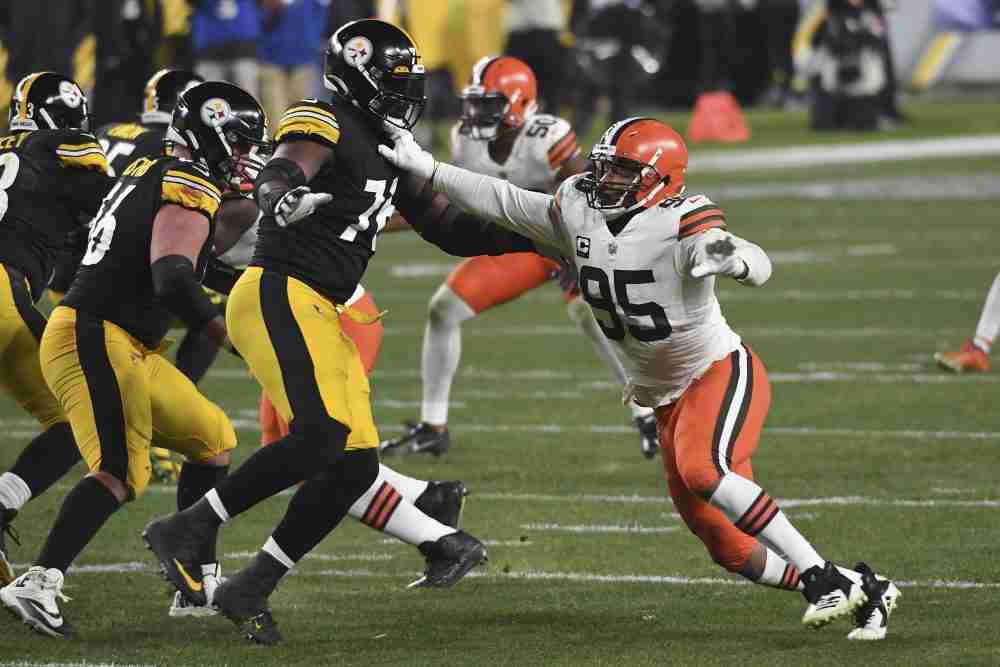 The NFL’s best edge rusher will be at FirstEnergy Stadium on Sunday.

The debate is whether he’ll be wearing brown and orange or black and yellow.

Browns defensive end Myles Garrett and Steelers outside linebacker T.J. Watt have been the most prolific edge rushers over the last two years, and the key AFC North matchup gives them another chance to establish superiority.

If this is Ben Roethlisberger’s final game in Cleveland, Myles Garrett wants proper send-off — a loss

McGinest, who had 86 sacks in 15 seasons with the Patriots and Browns, said the discussion of Garrett (6-foot-4, 272 pounds) starts with his “freakish athletic ability.”

“You don’t find many guys his size that is that powerful, explosive, athletic, can bend, fast off the edge,” McGinest told The Chronicle-Telegram by phone during the week. “And it’s tough to block him. Because if you’re soft, he can just run you over, he can run through you. And he can take the edge, he has great bend, he gets low and get around with this speed. And he has enough moves.

“I still think he’s getting better as a pass rusher. I think he can add to his arsenal a lot more moves and his ability to use his hands and his length. So his upside and him getting better is something that makes him super dangerous.”

McGinest agrees with Garrett that his next step is dominating for a full season. Garrett had 10 sacks in 10 games in 2019 before he was suspended for the final six, then he missed two games last year with COVID-19 and wasn’t the same when he returned.

“As long as he’s on the field he has the potential to be one of the best defensive players in the league,” McGinest said. “I don’t see many teams stopping him. You have to do so much to slow him down and stop him. He can wreck a game all by himself.”

Garrett, the No. 1 pick in 2017, has 52 sacks through his first 58 games. Since 1982, when the individual sack became an official statistic, only Hall of Famers Reggie White (70) and Derrick Thomas (55) had more to start their careers.

Garrett’s .90 sack per game is best in NFL history, according to CBS Sports, with White second at .85. Garrett saw that tweet and added that White was at 1.125 over his first five years (81 sacks in 72 games).

“Got work to do,” Garrett tweeted.

“The record has been my goal,” Garrett said. “But if you’re going out there, making an impact, being disruptive and you have 20-plus sacks and add some forced fumbles to it, then I’m going to help my team win and that’s what it’s all about.”

In addition to 56.5 sacks in 67 games, Watt has 20 forced fumbles, the most in the NFL since he was the No. 30 pick in 2017. He won the game against Seattle on Oct. 17 before Pittsburgh’s bye with two sacks and a forced fumble in overtime — the first player to do that since sacks started being tracked. 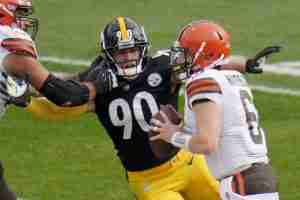 “That’s one thing, his big-play ability,” McGinest said. “And T.J. is versatile. He’s a true outside linebacker, in my opinion, it’s not just the edge rusher, because he can drop, he can do other things, he plays the run really well.

“He uses his hands really well. His sense for getting his hands on the ball whether it’s going up tipping passes or pass deflections, and then once he gets on the edge, his lean and his hands. He has a motor. It makes it tough for offensive tackles when you got a guy that just won’t stop and he’s fighting, knocking hands down, moving and constantly going towards the quarterback.”

“He can do it all,” said right tackle Jack Conklin, who will be the person most responsible for blocking Watt. “He’s quick, he has a ton of moves he can set up and he’s a real smart player.

“He’s going to read the way I play, how I’m setting and base his plan off of that. He’s not a guy where you’re going to see it all in the first quarter, he’s a guy who’s going to set things up and it’s going to be a constant chess battle.”

Watt was an All-Pro the last two years, and Garrett last year. They’re trying to unseat the Rams’ Aaron Donald as Defensive Player of the Year.

Garrett is the favorite, according to covers.com , with a 22.2 percent implied probability of winning. Cowboys corner Trevon Diggs (16.7 percent), Watt (14.3 percent) and Donald (11.1 percent) are next. The two Browns-Steelers matchups could go a long way in deciding who prevails.

Garrett will have to continue to put up big numbers despite what he and the fans consider a rash of uncalled holding penalties. Coordinator Joe Woods says it happens and Garrett can’t let it bother him.

“When you’re a big-time pass rusher, guys will do anything in their power to try and stop you and slow you down,” McGinest said. “He’s in the trenches. Unless it’s obvious you’re around a guy or by a guy and he’s still latching on and doing some things (it won’t get called).

“They’re trying to do everything in their power to stop this man. So if holding is a part of it, yeah, that’s gonna definitely be something that we see more times than not when it comes to him.”

That and a lot more.

“Well, you got to have a chipper, you got to slide protection toward him,” McGinest said. “I wouldn’t leave him one-on-one a lot. I would get the ball out, I would run screens, draws, try to keep him off-balance.

“You’ve got to be able to have balance and run the ball. I would run the ball at him, I would make him play the run, as well. He’s one of those guys once he gets going and he gets in a rhythm, it’s hard to stop.”

There’s a reason opponents pay so much attention to Garrett.

“He’s the man, there’s no doubt about it,” Steelers quarterback Ben Roethlisberger said.