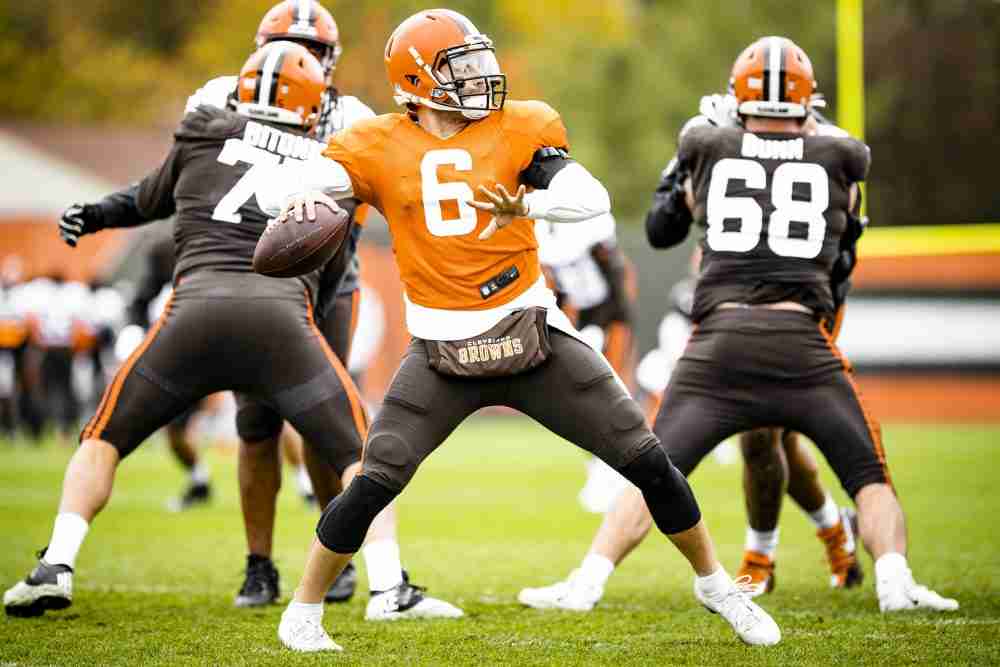 Q: With Baker Mayfield’s injury being long-term, what is the adjusted outlook on the season?

A: That’s the million-dollar question. And we’ll find out a lot more today against the Steelers.

If Mayfield finishes the game without another injury to the left shoulder, there will be hope he can continue to play through the serious injury. Of course, every game will be a risk, but getting through his first game with the fracture at the top of the humerus — hopefully with a win — will calm the situation.

And if that happens, I think the Browns’ goals for the season don’t change. They should go to the playoffs and make a run.

Things obviously change drastically if Mayfield gets hurt again — whether it’s today or next week. If that happens, I believe Case Keenum can win games and get the Browns into the playoffs as a wild card. While I wouldn’t rule out a miraculous, Nick Foles-like Super Bowl run, I wouldn’t count on it.

Q:
If Baker Mayfield leads the Browns to the playoffs playing with a torn labrum and a fracture most of the season, isn’t his market value as a QB going to rocket past that $40 million a year mark?

A: I would certainly think so. The manner in which it occurs matters, but a second straight playoff appearance for the Browns and persevering through such difficult circumstances should significantly boost his stock.

If that happens, I can’t imagine the Browns not securing Mayfield for the long term with a contract that goes over $40 million a year.

Q: Does Baker Mayfield’s injury give general manager Andrew Berry and the team leverage in negotiating a long-term contract?

A: This is the other side of the issue.

I don’t think just having the shoulder injury affects the leverage. Mayfield has repeatedly shown his durability and toughness by starting 53 straight games.

But if Mayfield misses more time this year, or the Browns miss the playoffs, the uncertainty surrounding his future skyrockets. If the Browns don’t think he’s the franchise QB, they could seek other options. If they do believe he is, they could use this year’s issues to lower their offer — when they finally make one. They have to tread carefully given his stature and desire to play through the injury, but if the Browns handle the negotiations correctly, the shoulder issue could save them a few million dollars a year.

Q: Anthony Schwartz was targeted five times in the opener vs. KC and then saw four targets in the next four games. His speed is supposed to scare defenses, how come it’s not being utilized?

A: First of all, it’s a crowded position room. With Odell Beckham Jr.’s return in Week 3, that shrunk the opportunities for Schwartz. He’s also dropped too many passes in the parts of practice reporters are allowed to watch to instill complete confidence in the coaching staff.

Schwartz’s speed is still a factor and he’ll continue to get snaps — he played 26 and 29 the last two weeks — but his impact will come mainly as a decoy. He’s the kind of player who could have a 75-yard touchdown one week then disappear for the next month.

Q: The Browns are a dynasty when it comes to the weekly injury list. Some are random, of course, but also lots of soft-tissue issues. Have you ever heard rumblings of the Browns looking into their processes or staff to find out why?

A: This organization is too smart and data-based to ignore the injuries. It’s done studies and tracks track how much each player runs every day. For now, the belief seems to be that the injuries are just a normal part of the game.

Q: Why didn’t the Browns put a spy on Kyler Murray like successfully done by Green Bay? It’s on film.

A: Coordinator Joe Woods said that was an option, as did rookie linebacker Jeremiah Owusu-Koramoah, who was the likeliest person to fill the role. But the decision was made to stick with its normal scheme.

I know exactly what you’re saying about trying to take away Murray’s threat to run with a designated defender, but it’s easier said than done. It would be a complete change from how the defense plays most other weeks and it compromises other areas of the scheme. It will be interesting to see if Woods goes a different way in the matchups against Baltimore’s Lamar Jackson.

Q: Did Richard LeCounte III have a run-in with the long arm of the law??

A: I was told that wasn’t the reason that coach Kevin Stefanski banned him from practice and the game this week. And a search of some local police departments didn’t turn up anything.

The team is sticking with its story of an undisclosed violation of team rules.

Mailbag: Will Browns stop the drama and put Baker Mayfield on IR?
Mailbag: Why do teammates love OBJ after he quit on them?