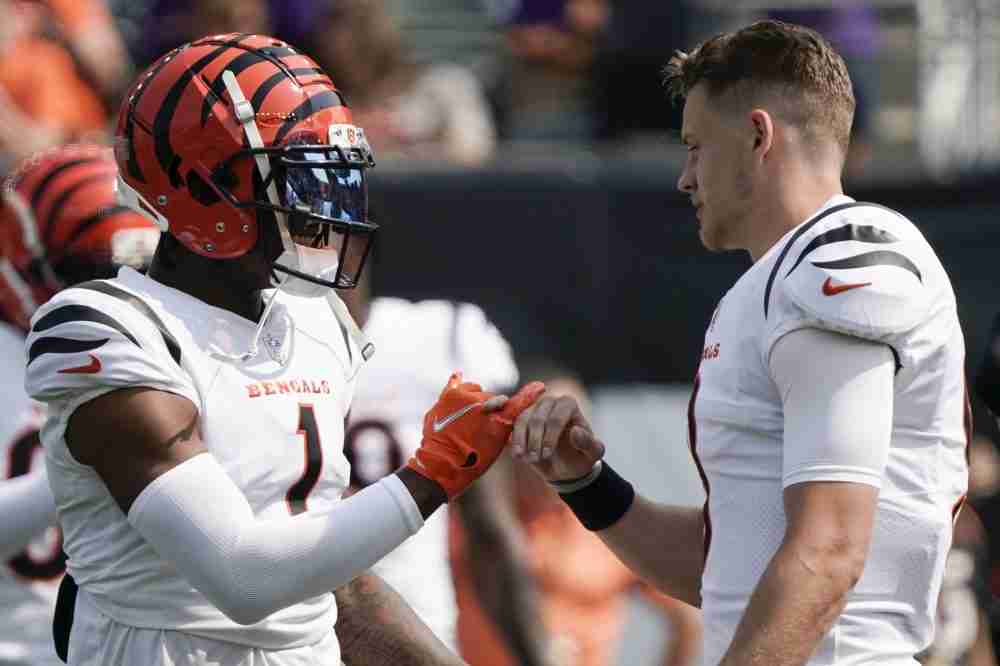 Bengals second-year quarterback Joe Burrow and rookie receiver Ja’Marr Chase picked up where they left off at LSU in 2019, when they connected for 1,780 yards and 20 touchdowns. Burrow’s return from a torn anterior cruciate ligament has been helped immensely by the addition of Chase, the No. 5 pick. Burrow ranks ninth in completion percentage (67.9), sixth in yards (2,215), third in touchdown passes (20) and sixth in passer rating (108.0).

“They’re two talented guys with a great rapport, and you can see it,” linebacker Malcolm Smith said. “The trust is there for them to just kind of toss it up. So we’ve definitely got to respect that and try to be on top of it.”

Chase (6-foot-1, 200 pounds) has 38 catches for 786 yards and seven touchdowns. The yards are second in NFL history for a player through his first eight games, his 20.7 yards per catch lead the league and he’s also first with six catches of 40 yards.

“He’s a lot faster than a lot of people thought he was coming out of college and just jumped off the tape is he’s physical, he breaks tackles, he’s very aggressive at the catch point,” free safety John Johnson III said. “He’s probably going to be the biggest physical challenge that we go up against on the outside.”

The difficulty for the Browns doesn’t end with Chase. Tee Higgins (29 catches, 353 yards, two TDs) and Tyler Boyd in the slot (37, 398, two) established a connection with Burrow last year and give him three formidable targets who are on the field a ton. Burrow completed 72 of 108 passes for 722 yards, six touchdowns, an interception and a 100.2 rating last year in 35-30 and 37-34 losses to the Browns. They fortified the secondary in the offseason and will counter with a full stable of cornerbacks: Denzel Ward, who’s expected to return from a hamstring injury, Greg Newsome II, Troy Hill in the slot and Greedy Williams and A.J. Green in reserve.

“It’s a big challenge for those guys in the corner room and we’re excited about it and we’re going to go out there and compete,” Johnson said.

An improved defense has been a huge piece in the Bengals’ surprising turnaround this year. Defensive tackle Larry Ogunjobi is a driving force. He was a third-round pick of the Browns in 2017 and started 47 games in four years but was allowed to leave as a free agent in March. The market was depressed, and he signed a one-year, $6.2 million deal with Cincinnati.

Ogunjobi’s impact on the field is obvious. The Browns played him mostly at nose tackle, but the Bengals have freed him by using him over the guard and sometimes the tackle. He has 30 tackles, seven tackles for loss, 3.5 sacks and five quarterback hits. He’s also an extremely positive person who’s a good influence and leader in the locker room.

“Larry’s a baller,” defensive end Myles Garrett said. “Larry’s having a great year, I’m glad to see it. He’s happy, he’s doing what he does best and that’s bring heat in the backfield from that middle.”

“They have him in a good position and he’s playing a very big role for them,” left guard Joel Bitonio said. “On third down he’s one of their premier inside pass rushers. He’s done a lot of things.”

Cincinnati’s run defense ranks seventh (94.4 yards per game) and will be tested by Cleveland’s top-ranked rushing attack (161.1) and Nick Chubb, who was held to 61 yards by the Steelers last week. The Browns run defense ranks third (84.8) but will have its hands full with Joe Mixon, who’s fourth in the league with 572 rushing yards.

The Browns passing offense isn’t working nearly well enough, and the questions only got louder with the departure of receiver Odell Beckham Jr.

The defense can help. The takeaways that helped jump-start the offense last year have been missing through the 4-4 start. The Browns have four takeaways on defense — three interceptions and a fumble recovery. Nothing changes a game quicker than a turnover, and if the Browns are going to alter the course of the sputtering season, this is a wonderful way. Coordinator Joe Woods is stressing takeaways more than ever.

“I do not think it is luck. I think if you do your job and you play technique, the takeaways will come,” he said. “We are doing more things to emphasize it. We chart them every day, making the cutup and showing the players opportunities where we did ball search and turn the ball over and then opportunities where we missed. It comes down to guys running to the ball, doing their job and taking advantage of the situation.”

Garrett is still searching for his first strip-sack of the year, and Smith last week became the latest defender to drop what should’ve been an interception. Burrow should provide opportunities — nine interceptions and a fumble — and the Browns must take advantage. A defensive score could be the ultimate difference-maker.

“We need to start getting points on the board from us being on the field and I think I can be the cause of that whether that’s me dropping back or me being a force in the pass rush,” Garrett said.

Yards per pass play for the Bengals, second in the NFL.

Points by the Browns in the two minutes before halftime, most in the league. The Bengals rank third with 37.

Cleveland’s point differential in the fourth quarter — 44 for the Browns, 66 for opponents.

Predicting how the Browns will respond to the tumultuous week is tricky. I think they’ll play well, but that doesn’t guarantee a victory. Bengals 28, Browns 27.

Commentary: ‘NFL Zapruder film’ forces issue with Odell Beckham Jr.
Commentary: Everything was riding on this one, and the Browns delivered a season-changing performance