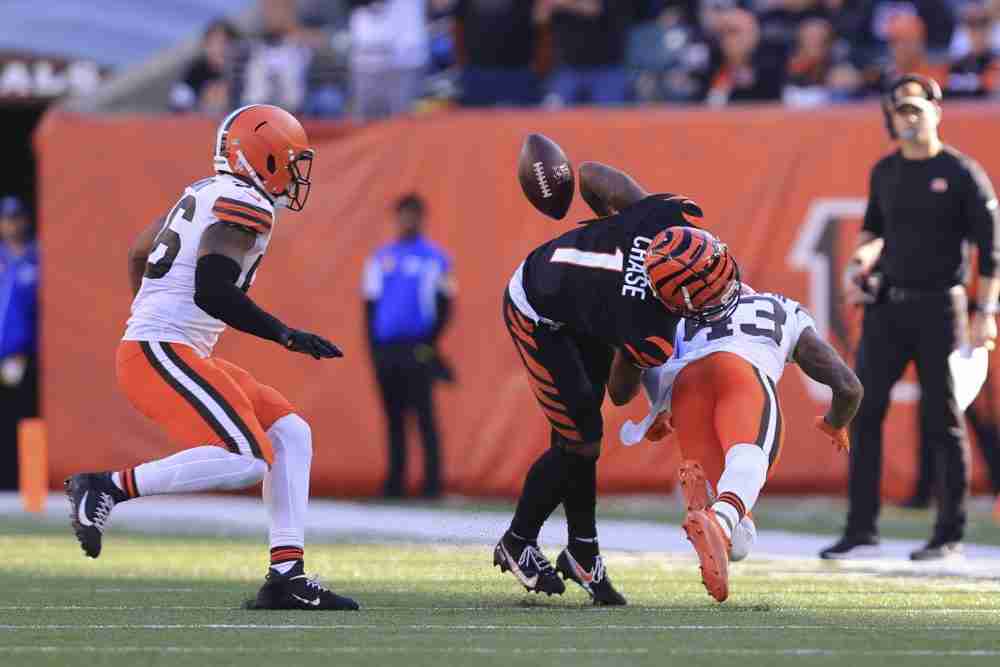 CINCINNATI — Browns cornerback Denzel Ward practiced against Bengals quarterback Joe Burrow for three years as teammates at Ohio State, so the question of whether he had intercepted Burrow struck him as unnecessary.

None of the scarlet-and-gray practice picks compared to what Ward did to Burrow on the game’s first possession at Paul Brown Stadium.

Ward stepped in front of an out route by rookie receiver Ja’Marr Chase from the 3-yard line and returned it 99 yards for a touchdown. Only Brodney Poole’s 100-yarder in 2007 was longer in Browns history.


Ward, who missed the loss to the Steelers last week with a hamstring injury, provided a huge momentum shift out of the gate and propelled the Browns (5-4) to a day of big plays in a 41-16 win.

“Denzel’s a great player,” quarterback Baker Mayfield said. “He continues to show that he’s a game-changer time and time again. Makes a great play on a ball against a great receiver. I’m so proud of those guys on defense.”

Commentary: Everything was riding on this one, and the Browns delivered a season-changing performance

The interception came after an offside penalty on defensive tackle Malik McDowell negated a sack by Myles Garrett and gave the Bengals another shot at third down. Ward and Burrow talked after the game.

“There was a safety inside so I kind of just stop Ja’Marr with the ball, and Denzel was right there and made a good play to the ball,” said Burrow, who was 28-for-40 for 282 yards, two interceptions and a 69.0 passer rating. “So credit to him.”

Ward and the defense weren’t done. After totaling four takeaways — the special teams added a fifth — in the first eight games, the defense got three against the Bengals (5-4).

Ward had a hand in two and a foot in the other.

He tipped a third-quarter pass intended for Chase on a slant, and free safety John Johnson III caught it. In the second quarter, Johnson forced a fumble by Chase, and cornerback A.J. Green recovered. Green was only in the game because Ward’s shoe came off on the previous play.

The turnovers turned into 13 points for the Browns.

“It’s been an emphasis. We’ve been working in practice, finding ways to get interceptions and takeaways,” Ward said. “Punching the ball out, whatever you have to do. The coaches called a great one. They got guys with vision able to attack the ball.”

Ward missed much of the second drive catching his breath.

“Oh, man, I was tired,” he said. “I needed the oxygen tank after that. I was good after a while. I just needed some air.”

Johnson’s interception was his second of the year and 10th of his career. He returned it 31 yards. He had never had an interception and a forced fumble in the same game and is starting to hit his stride midway through his first year with the Browns.

“Just trying to put myself in positions to make plays, whether that be schematically or just my knowledge of the game,” he said. “I saw No. 1, I tried to rotate to where he was a lot in this game.”

Chase is No. 1, and the Browns had his number.

The No. 5 pick entered with 38 catches for 786 yards and seven touchdowns. The yards were second in NFL history for a player through his first eight games, his 20.7 yards per catch led the league and he was first with six catches of 40 yards.

He caught six passes on 13 targets for 49 yards, a long of 15 and an 8.2 average. He fumbled, was the target on both interceptions and couldn’t hang onto a pass in the end zone and another deep one.

“We pressed him, we were physical, played the ball in the air, and at the catch point we just out-physicaled him,” Johnson said. “He had a couple balls that he probably could have come down with and we found a way to break them up. I think it was just competing with him.”

The Browns had five sacks to give them 27 on the season. Garrett had 1.5 to raise his league-leading total to 12, nickelback Troy Hill had two, linebacker Anthony Walker Jr. one and defensive tackle Sheldon Day a half.

Garrett has a full sack in each of the last five games, 54.5 for his career and is 7.5 behind Clay Matthew for most in franchise history.

“Sometimes it’s me, sometimes it’s him,” Garrett joked of Hill, whose only previous sack came in 2019 with the Rams. “He might have to line up on the left side or move to the middle, I don’t know.

“It’s awesome. He’s not scared to throw his hat around, whether it’s him blitzing or going downhill to make a tackle.”

The defensive breakthrough came at the perfect time. The Browns had lost three of four to fall into last place in the AFC North.

“With your backs against the wall, we broke the .500 (mark), big turning point in the season,” Johnson said. “I know I said earlier in the week, you can either tank and just start losing games or you can put all that stuff to the side, come together as a team and start winning.

“We always want to go 1-0 and that’s the first step. So when we look back on it from afar, the whole season, we’re going to look at this point in the year and say, oh, that’s when things started kicking in. It was a good first step, but we gotta keep it going.”