Mailbag: Why do teammates love OBJ after he quit on them? 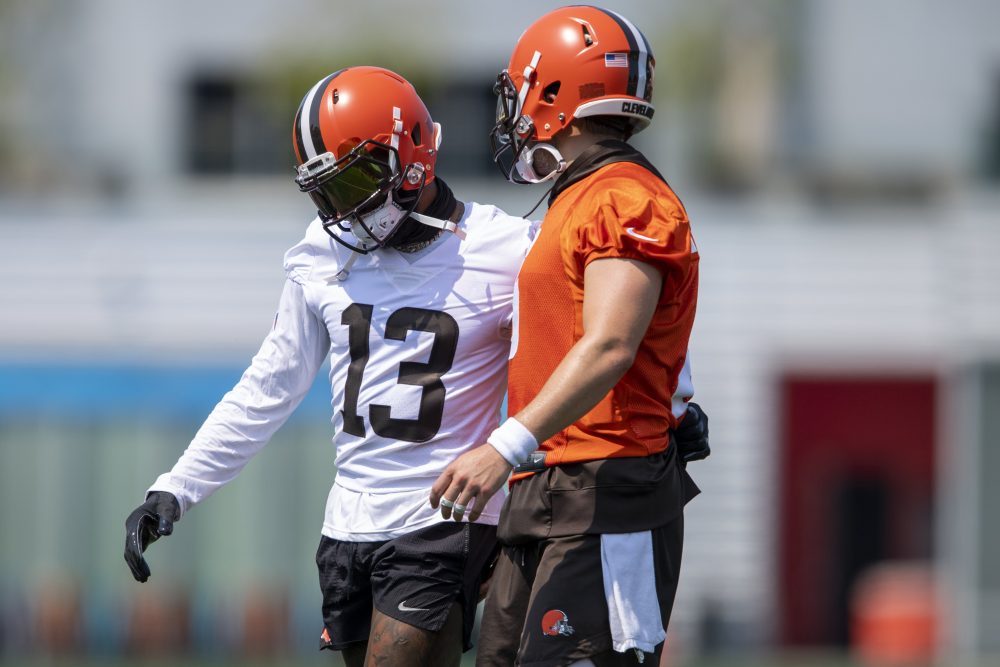 Q: I am not understanding the love for OBJ in the locker room. Reports are that he wanted out for a long time and he essentially quit on his team this year. How is this not viewed in a negative light?

A: This is a question I’ve considered all week, so I think it’s a great one.

Odell Beckham Jr. did want out for a long time, but I think he hid that from his teammates. From everyone I’ve talked to through his 2½ years, Beckham was loved and revered among teammates. He’s a likable and fun guy, and one of the most famous people in the world. That appeals to other players.


It would be one thing if he sulked and ripped the organization to teammates, but I don’t get the sense he did. Hence, the divide between how the front office and players viewed the week and his departure.

As an aside, I think there was plenty of blame to go around in the situation.

Beckham forced his way off the team because he was frustrated by his role, or lack thereof. That’s not OK. And coach Kevin Stefanski and quarterback Baker Mayfield should’ve done a better job making sure he got the ball more. He’s still too talented to be targeted one time.

Q: How serious a test of Coach Kevin Stefanski’s leadership is the OBJ crisis?

Stefanski was already receiving a degree of criticism for his play calling and the struggles of the offense, but this is the first time in his two years he had to deal with an issue like this.

It’s a delicate situation that requires strong communication, something Stefanski has been praised for. But even by the end of the week, Myles Garrett said he didn’t understand how things got so bad so fast with Beckham. Stefanski has to correct that misconception and convince the team Beckham wanted out — without making it a character assassination. The players need to believe the Browns had no choice but to cut Beckham.

Q: Without divulging specifics, have there been other murmurs of discord surrounding Odell that are likely to become public now that he’s gone? It seems like this escalated too quickly.

A: I fully expect Beckham to air his grievances at some point after he lands with another team. From the Browns’ perspective, I think the biggest points have been made public — he asked for a trade multiple times over a range of time and made it clear following the Steelers game he wouldn’t play here.

Q: Candidly, Scott, after being publicly undermined by @OBJ, how can Baker Mayfield possibly trust his teammates who did little or nothing to defend him? #Browns

A: I get your point, but I don’t see it that way. I think the show of support from Beckham can be separated from any loyalty to Mayfield. I understand the impact of the video shared by Beckham’s dad, but I think the players can miss Beckham and still follow Mayfield.

Mayfield knew how popular Beckham was, so this shouldn’t have been a shock.

Q:
Do the Browns draft a WR in the 1st round?

A: It’s definitely a possibility. Receiver will be a need, it just depends to what degree. Jarvis Landry is due $16.5 million next season, with only a $1.5 million cap hit if he’s cut, so a lot can change before April.

I would put defensive tackle, defensive end, receiver and tight end as my early possibilities for the first round.

A: I expect coordinator Joe Woods to rely on the front four to create pressure, dropping seven in an attempt to prevent big plays and perhaps confuse quarterback Joe Burrow. The biggest vulnerability on the Bengals offense is the line, so that’s the best way for the Browns to attack. I think Woods will start by trusting Myles Garrett, Jadeveon Clowney, Takk McKinley and Malik Jackson to win their matchups. If that doesn’t happen early, Woods will be forced to blitz. The Browns can’t win without pressuring Burrow.

Q: People talk about Baker Mayfield, do you think Stefanski will be back next year

A: Yes. Without a doubt. He’s struggling a bit, but I haven’t lost confidence in him and I really don’t think ownership has.