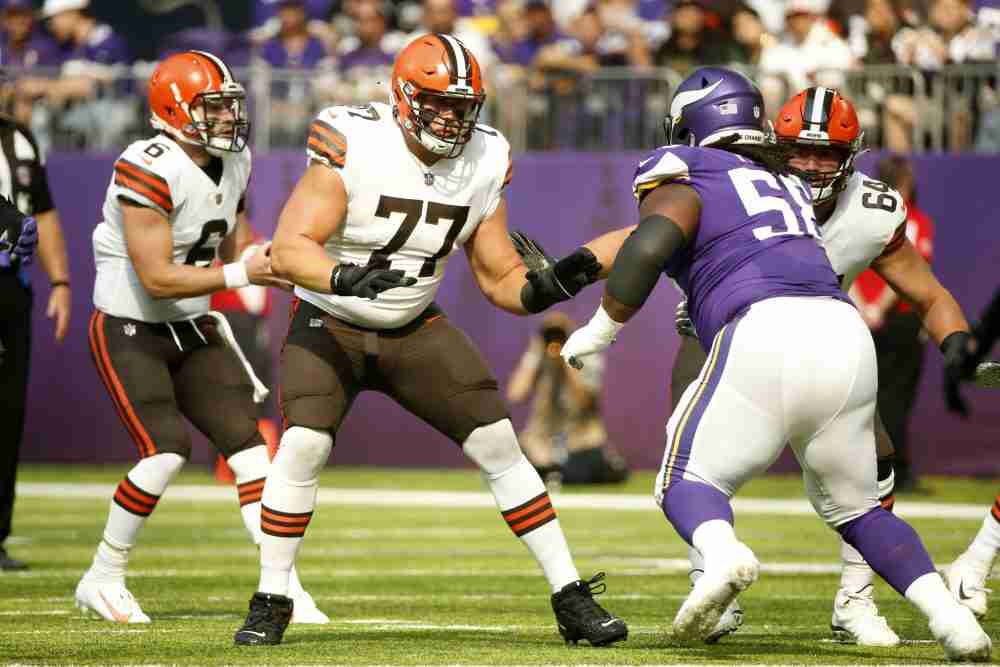 Before the season there was discussion of whether the Browns offense would evolve into more of a passing attack in Year 2 under coach and play caller Kevin Stefanski. Passing is king in today’s NFL — and made easier by the rules — and Stefanski had a normal offseason to expand the playbook after the pandemic changed everything his first season.

Those questions have been answered.

With an emphatic no.

The Browns’ identity is the run game, and there’s no room for debate.

The four-year, $56.8 million extension, including $28 million guaranteed, signed Tuesday by right guard Wyatt Teller was the final piece of evidence. The jury can stop deliberating.

Teller went from obscure lineman not guaranteed a starting job to cult hero in 2020. He destroyed defenders at every level in the run game, using his speed and power to clear huge holes for Nick Chubb and Kareem Hunt.

The blocks weren’t ordinary pancakes. They were loaded with chocolate chips, strawberries, syrup and whipped cream.

Cleveland’s love of the ground attack lifted Teller’s profile, and Pro Football Focus turned him into a mythical figure by grading him as the best guard in the NFL and No. 18 overall. His pass-blocking grade was average, but the site gave extra weight to his dominance in the run game.

Despite his emergence, the Browns seemed unlikely to sign him to a contract extension. They had invested premium resources in the other four starting linemen, the salary cap isn’t infinite and a line should be able to succeed with four studs and an average Joe at right guard.

Then the first nine games of 2021 happened.

Stefanski doubled down on his commitment to the run — perhaps in part due to Mayfield’s left shoulder injury — and Teller continued to dominate. His block on Chubb’s 70-yard touchdown run Sunday in the 41-16 win over the Bengals has deservedly received a lot of attention on social media. Teller pulls to the left, engages safety Jessie Bates III and flattens him by flying through the air.

“I think I got more lucky on that play — I almost tackled him,” Teller said Tuesday on a Zoom call.

“‘Look, it is not holding. You are just using force against force,’” Teller said, relaying the message. “He made me feel better about it. I am lucky I did not get the rag (penalty flag). It was definitely a good block.

“Nick saw that hole and he took it. I just made it a little bit bigger.”

Those types of blocks are awesome to witness. More importantly, he’s consistently good in the run game and improved in pass protection.

His ability to run powers, pulls and screens fits perfectly with who the Browns are and what they do.

They have run on 51 percent of snaps this year — 273 rushes to 261 passes. The runs include quarterback scrambles, but they rank 30th in the league in passing play percentage (51.2) and pass attempts (29 a game).

They led the league in rushing until this week, slipping to second (160.2 yards a game) behind Baltimore’s 161.6 that relies heavily on quarterback Lamar Jackson. The Browns rank first with 5.3 yards a carry and 16 rushing touchdowns.

“Wyatt is a tone-setter for our team and brings a physicality that helps establish the brand of football we want to play,” Stefanski said.

The long-term commitment to the run is the only way to justify devoting so many resources to the line as well as the backfield.

“When you can lock down some guys for four or five years together, that is special,” Teller said. “Each year you are gaining so much continuity and so much experience together that each year it gets better and better and better.”

The commitment to the run game isn’t going anywhere. Neither is Teller.

Commentary: Everything was riding on this one, and the Browns delivered a season-changing performance
Cleveland sports has dealt with far worse than current health situation for Browns