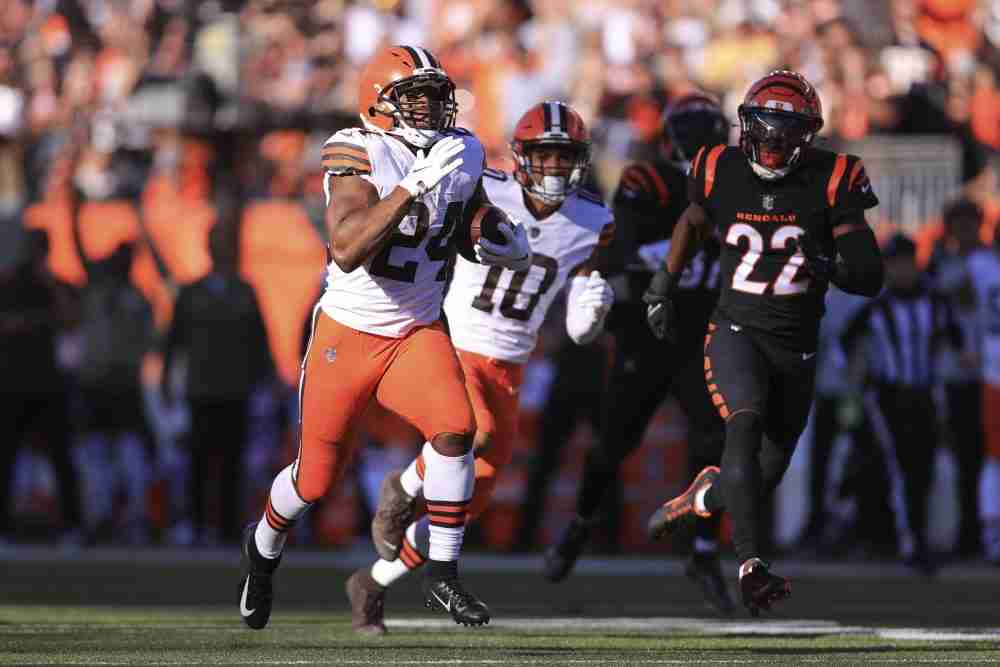 Just when things were starting to look up for the Browns following a 41-16 win over the Bengals on Sunday, they were brought back down to earth.

Running back Nick Chubb and rookie receiver/running back Demetric Felton tested positive for COVID-19 on Tuesday and were placed on the COVID reserve list.

Because they’re vaccinated, there’s a chance they could be cleared to play Sunday against the Patriots in a matchup of 5-4 AFC playoff contenders, a league source confirmed to The Chronicle-Telegram.

“It’s like for every good news, there’s something bad that happens. What is this, the world?” right guard Wyatt Teller said during a Zoom call to discuss the four-year, $56.8 million extension he signed. “But, no, it sucks. I hope the best for them. I really hope they’re back quickly, no symptoms.”

The Browns had largely avoided COVID issues through the first half of the season but had four positive tests in the last two days. Running back John Kelly and practice squad receiver Lawrence Cager were put on the reserve list Monday.

The team has gone to enhanced protocols, which includes virtual meetings, masks in the building and increased testing.

If the Browns are without Chubb, Felton and Kelly on Sunday — or a combination – they’d be short-handed in the backfield. Without Chubb, D’Ernest Johnson would likely make his second start. In the first of his career Oct. 21 against the Broncos, he rushed for 146 yards and a touchdown.

He’s the only running back on the active roster. Brian Hill was signed to the practice squad Tuesday afternoon. He’s in his fifth year and has 198 carries for 945 yards and three touchdowns.

Kareem Hunt, normally the No. 2 back, is eligible to come off injured reserve this week after missing three games with a calf injury, but after he got hurt Oct. 17, coach Kevin Stefanski said he was expected to miss a “ballpark” of four-to-six weeks.

Chubb, a Pro Bowler the last two years, rushed 14 times for 137 yards and two touchdowns Sunday. He’s third in the NFL with 721 rushing yards and tied for second with a 6.0 average, adding six rushing touchdowns.

Felton is the punt returner, averaging 8.4 yards on 26 returns. He’s played mostly in the slot on offense, catching 13 passes for 147 yards and a touchdown. He has three carries for 16 yards.

The Browns aren’t strangers to adversity, including those stemming from COVID issues. They were without their top four receivers last year for a loss to the Jets due to contact tracing, and Stefanski missed the playoff-opening win at Pittsburgh after testing positive.

“I remember one game, we had like 15 dudes in a hot tub that you’re only supposed to have about five and we got in trouble and they all had to sit out a game and we had no wide receivers,” Teller said. “I feel like if you follow the rules, you do the right things, it gives you the best opportunity to get back. That’s not how it always works. There’s times where this happens or that happens, but it’s happening to everybody.

“To say poor me or poor this or poor that, it’s not the best mindset. It’s hey, how are we going to handle this situation and to handle in stride? I think that’s how Coach Stefanski is, and I’m thankful for that.”