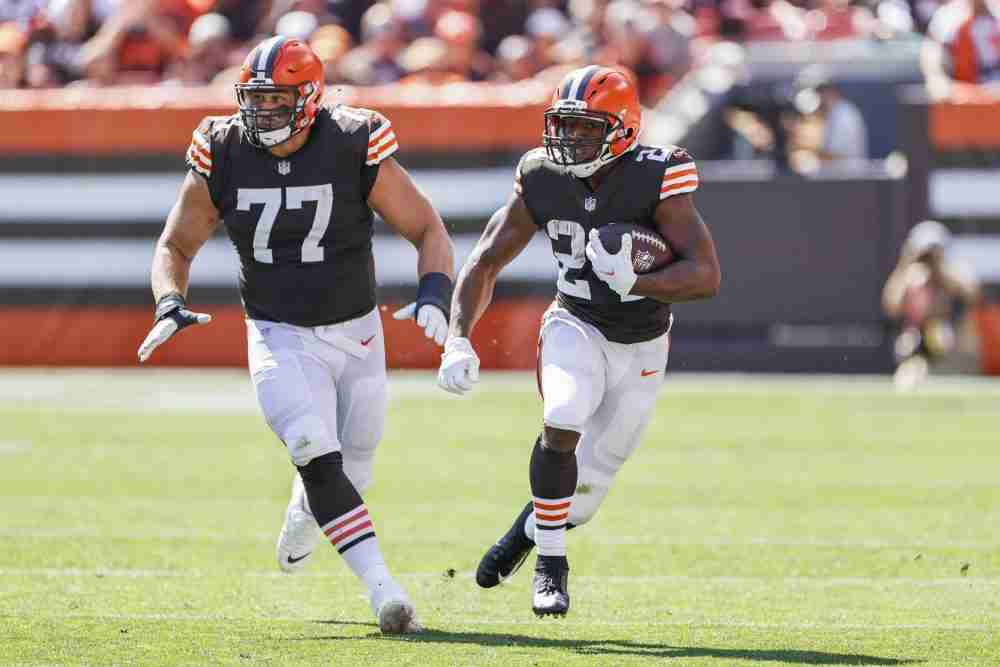 Wyatt Teller won’t have to work when his playing days are over after signing a four-year, $56.8 million extension Tuesday, including $28 million guaranteed.

He has an interesting option if he wants to stay busy.

“All of my wife’s friends make a joke, ‘If you do not open up a pancake house after football, you are crazy,’” Teller said on a Zoom call.

The 6-foot-4, 314-pound right guard with a mauler’s mentality has become a cult hero in Northeast Ohio for his demolition of defenders. He drives linebackers downfield and flattens defensive backs — like a pancake.

Teller, who will turn 27 Nov. 21, was set to become a free agent after the season, and the extension runs through 2025. Only Washington’s Brandon Scherff ($18 million on the franchise tag) and Kansas City’s Joe Thuney ($16 million) have higher average salaries at guard than Teller’s $14.2 million.

Teller said the negotiation was “slow until it was fast.”

“All of the sudden, it was happening at light speed,” he said. “It was definitely a blessing.

It helps that the city loves its linemen.

“The blue-collar mentality, we have a fan base that is paycheck to paycheck, yet they have season tickets,” he said. “That is how important it is to our fan base to be there to support us. Sometimes we do not make them too happy, but hopefully we can make them happy, keep them pleased and keep this city hungry once we get some success.”

He began his career at Virginia Tech as a defensive lineman, moved to offense as a freshman because of a rash of injuries and expected to move back. The return didn’t happen and he became a fifth-round pick of the Bills in 2018. They gave up on him quickly, and then-Browns general manager John Dorsey traded for him at the end of the 2019 preseason.

Teller started the final nine games of 2019, then the team, under new management and with a new line coach in veteran Bill Callahan, added competition and Teller had to fight to keep his starting spot in 2020. He quickly became an indispensable piece of one of the league’s best rushing attacks and will be paid accordingly.

“Wyatt Teller’s NFL journey is a remarkable story of resiliency and work ethic,” general manager Andrew Berry said. “He completely changed his body composition, competed daily to earn his starting job and developed a ceaseless desire to learn from the best OL coach in our sport. To see Wyatt turn himself into one of the top guards in the game has been an enormous pleasure.”

Teller quickly established himself as a force in the wide zone run scheme of Stefanski and Callahan, consistently dominating defenders as Nick Chubb and Kareem Hunt became the league’s top running back tandem.

Teller picked up where he left off this year, and the Browns rank second in the NFL with 160.2 rushing yards a game and first with a 5.3 average and 16 rushing touchdowns.

The decision to extend Teller may have seemed like a foregone conclusion, but it wasn’t. The Browns had already invested a ton of resources on the line, and there’s only so much money to go around with the salary cap.

But Teller’s repeat performance in 2021 was impossible to ignore. He is better as a run blocker than pass blocker but has improved in that area, allowing one sack this year, per PFF.

“This year, getting a little bit more consistent and not having splash plays or bad plays,” he said. “It truly is amazing. I am thankful that the fans of Cleveland, offensive linemen are loved and they are glorified here. That is just a special city.”