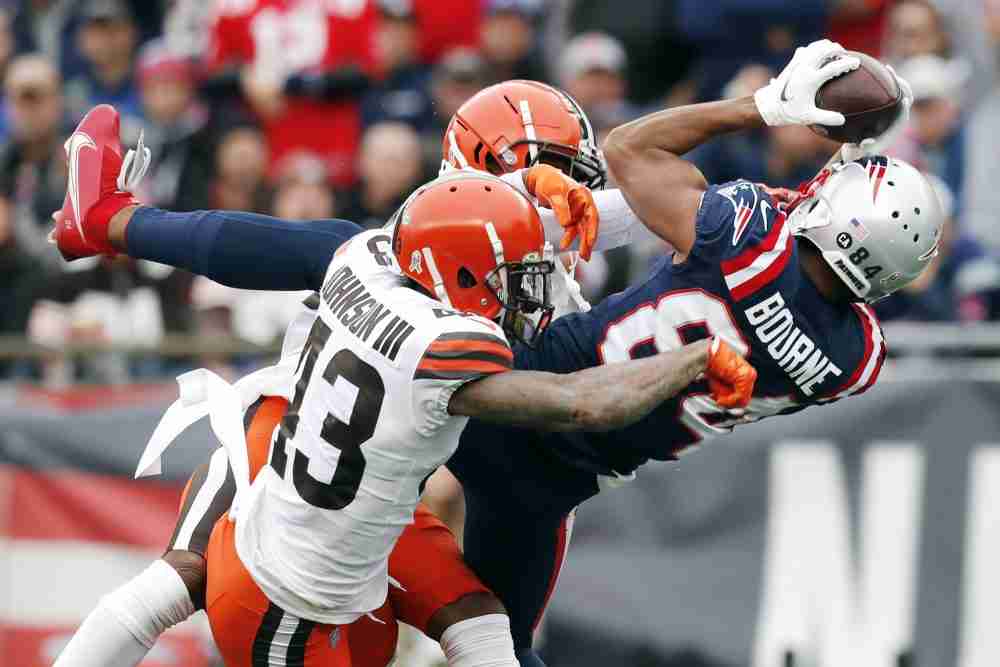 Losses come in all shapes and sizes. The Browns’ 45-7 defeat Sunday at New England falls in the potentially-season-crushing category.

The Browns went 84 yards in 11 plays on the opening drive, then managed 138 yards and no points in the final 55 minutes. The Patriots, with rookie quarterback Mac Jones playing like Tom Brady on a good day, scored six touchdowns and rolled up 452 yards.

Perhaps most disturbing is that the embarrassment followed the best win of the year last week in Cincinnati. In fact, the 25-point win against the Bengals was the most lopsided in coach Kevin Stefanski’s two years and the 38-point drubbing by the Patriots the largest defeat.

Everything the Browns did well in Cincinnati — takeaways on defense, explosive plays on offense and a complementary effort from all three phases — went missing in Massachusetts.

The debacle begs for discussion, but none of it is good.

Stefanski went to the University of Pennsylvania and was hired in large part for his intelligence.

He and his staff were no match for Bill Belichick and his assistant coaches.

Stefanski had a great plan for the opening drive, and D’Ernest Johnson rushed for 58 yards on four carries while starting in place of Nick Chubb, who’s on the COVID-19 list. Then nothing worked.

Of the next six drives, the best gained 23 yards and New England’s 49-yard line was as close as the Browns came to the end zone.

The Patriots did a much better job defending the run after the first drive, but the real masterpiece came in the passing game. Belichick took away the first read and had quarterback Baker Mayfield looking confused as he searched for answers.

Mayfield went 11-for-21 for 73 yards, two sacks, a touchdown, an interception and a 56.2 passer rating before leaving late in the third quarter with a right knee contusion. Stefanski said he expected him to play next Sunday when the Lions visit FirstEnergy Stadium, but Mayfield walked gingerly in and out of his postgame news conference, conceded he’s “pretty beat up” and was less emphatic than usual that he’d be ready to go.

The coaching mismatch was worse on the other side of the ball.

“We didn’t make any adjustments on the sideline or when we had time to,” All-Pro defensive end Myles Garrett said.

THE HEAT IS ON … AGAIN

Woods was asked during the week if the defense had turned the corner after allowing 14, 15 and 16 points in the previous three games. Luckily he said no, adding things were starting to come together but consistency was needed.

Turned the corner? After Sunday, it’s more like going 100 mph in reverse?

The vocal segment of the fan base that made Woods a target early in the season is back in full throat. And it’s got a point — one that Garrett seemed to strengthen with his comments.

Woods isn’t the only one deserving of blame.

The tackling was atrocious against the Patriots, which can be a sign of lack of effort or lack of commitment. Neither is good.

Everyone knew it was going to be a physical game. The coaches and players said so all week.

The Browns simply didn’t match the Patriots’ toughness. The rushing stats help tell the story, as Cleveland had 20 rushes for 99 yards and New England 34 for 184 and two touchdowns.

To make things worse, the defensive playmakers didn’t show up, which safety John Johnson III said he pointed out to teammates in the locker room.

Garrett had a sack to raise his league-leading total to 13 and added a pass defensed, but the Patriots neutralized him with cut blocks and double teams. Nobody else did much of anything.

DOWN IN THE DUMPS

Third down is about coaching and quarterbacking. The Browns were dominated on both fronts.

The Patriots went 7-for-9 on third down, including converting their first six as they took a 24-7 halftime lead. The Browns went 1-for-11, including failing on their first five.

These plays change a game.

If the Browns had gotten a stop on third-and-8, third-and-6 or third-and-13 on the first drive, they would’ve kept the lead and built a ton of momentum. Instead, McDaniels and Jones (19-for-23, 198 yards, three TDs, 142.1 rating) found their grooves and the Browns lost confidence.

“Great play calling,” Garrett said. “They were pretty much max protecting and trying to get to the middle of the field, and we didn’t have an answer for it.”

The Browns’ last chance to make it a game was lost on a third down in the third quarter.

On third-and-2 on their first possession of the second half and still down by 17, Stefanski called a run by Johnson against a stacked box. Left tackle Jedrick Wills Jr. didn’t block linebacker Ja’Whaun Bentley, who dropped Johnson for a 3-yard loss.

The third-down offensive struggles weren’t all on Mayfield, but he never figured out a way to make a play. The worst example was a poor-decision, poor-throw interception on third-and-7 from Cleveland’s 32-yard line on the second possession.

The pick was returned to the 5 and quickly turned into a touchdown. The Patriots never looked back.

Without Odell Beckham Jr. — some can argue even with Beckham — the Browns don’t have a game-breaker at receiver, especially with Jarvis Landry slowed by a knee injury. The Patriots don’t have a difference-making wideout, either.

Yet New England’s wideouts made plays all day. Cleveland’s didn’t.

New England’s collection of Kendrick Bourne, Jakobi Meyers, Nelson Agholor and N’Keal Harry combined for 11 catches for 194 yards and two touchdowns. For the Browns, Jarvis Landry had four catches for 26 yards and Donovan Peoples-Jones one for 16. That’s it.

When Mayfield surveyed the field, he didn’t have many open targets. Part of that is Stefanski’s play calling, part the receivers’ inability to win one-on-one battles.

Tight end David Njoku didn’t help. He had two drops, including one in the end zone on the first drive. If tight end Austin Hooper hadn’t bailed him out with a nice fourth-down touchdown catch, the Browns would’ve been shut out.

The Browns are 5-5, have lost four of six and have scored 17 or fewer in four of the last five.

They’re behind nine teams in the AFC playoff chase. They blew a great chance to pick up ground in the AFC North, as first-place Baltimore (6-3) lost to Miami (3-7) and second-place Pittsburgh (5-3-1) tied Detroit (0-8-1).

After 10 games, the Browns don’t have a great win. The 41-16 thumping of the Bengals was good and the 14-7 win in Minnesota and the 17-14 Thursday night victory over the Broncos were pretty good, but that’s the best of the resume.

They’ve had chances for a signature win but blew leads to the Chiefs, Chargers and Steelers. To make the losses sting even worse, all three teams are ahead of the Browns in the playoff chase.

Left guard Joel Bitonio said 9-8 isn’t going to be good enough to make the playoffs, so the Browns need to stack wins. He’s right. They’ll likely need at least 10, which means going no worse than 5-2 the rest of the way.

That’s almost impossible to imagine after what happened Sunday in New England.

Commentary: Could it be the Browns aren’t as good as we … and they … think they are?
Browns-Lions Preview: 3 things to watch, 3 key numbers, the prediction