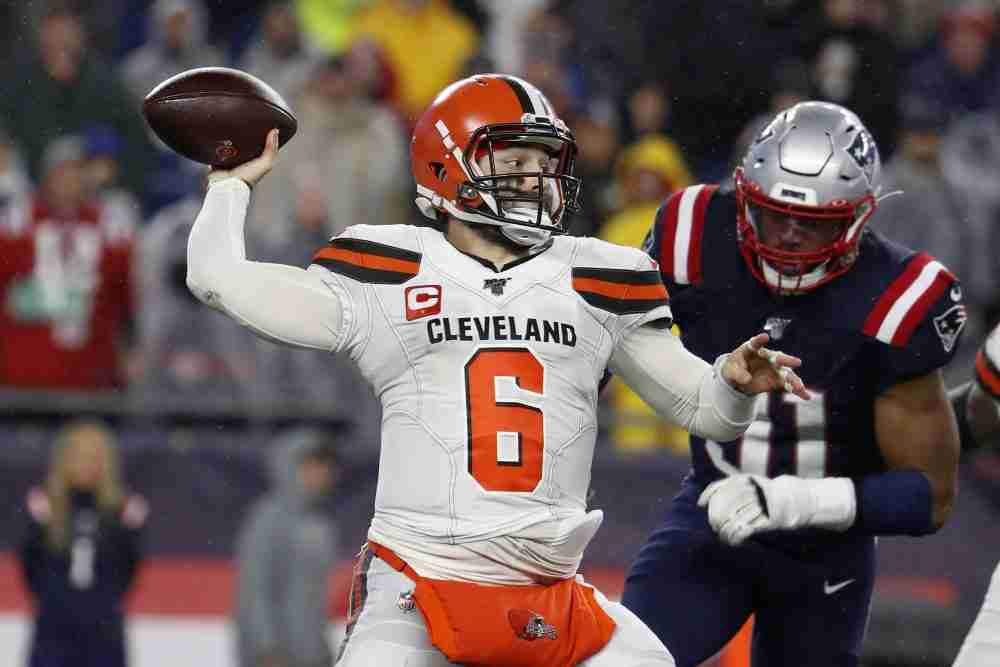 Bill Belichick carries an intimidation factor into every game. It comes with his six Super Bowl rings as coach of the Patriots.

Then he references “The Art of War.”

“If you want to go far enough, look at Sun Tzu,” Belichick said Friday when asked about designing opponent-specific game plans. “Look at the great generals, you exploit your strengths and attack weaknesses. That’s about as fundamental as it gets.

“At the heart of it, that’s really where it starts for us every week.”


Baker Mayfield didn’t need the Sun Tzu shout-out heading into Sunday’s key AFC matchup in Foxborough, Mass., to know how Belichick operates. Mayfield has watched Belichick’s defenses his whole life and experienced one firsthand in a 27-13 loss in 2019 in New England.

“It is always a game plan defense,” Mayfield said Wednesday. “They are very versatile. They can do a lot of disguising, but the emphasis for them is to stop what you are best at. Going into it, we would expect them to try and stop the run and for that to be the emphasis.

“We will see how they handle it with obviously the news about our running backs. We have to be prepared to react and adapt to whatever we are seeing.”

The Browns are short-handed at running back with Nick Chubb, John Kelly Jr. and Demetric Felton on the COVID-19 list and Kareem Hunt (calf) on injured reserve. Mayfield will be asked to carry more of the load but can’t try to do too much against a Patriots defense that’s first in the NFL with 13 interceptions and fourth with 18.9 points allowed per game.

Cornerback J.C. Jackson is the primary threat. He leads the league with five interceptions and is tied with 12 passes defensed. He had two interceptions last week, including one returned for a touchdown.

The plethora of picks is nothing new. Jackson had nine last year, to go with three fumble recoveries, and leads the NFL with 22 interceptions since he entered the league in 2018.

“He is a very, very talented player,” Mayfield said. “He is always around the ball. He has extremely good ball skills when it is in the air. He has hands like a skill player on offense so he is able to make plays on the ball.

“A smart guy. He is a guy who you definitely need to know where he is and see where he is playing technique-wise and all of that. Just one of those guys who you do not want to let ruin the game.”

Mayfield still has a torn labrum and fracture in his left, non-throwing shoulder and missed practice time Wednesday with a sore foot but is coming off perhaps his best performance of the year in the 41-16 win over the Bengals. He went 14-for-21 for 218 yards, two touchdowns and a season-high 132.6 passer rating.

Mayfield will have to process information even faster against Belichick, who has sons Steve and Brian on the defensive staff. Not only will the Patriots try to make Mayfield second-guess himself when diagnosing the coverage, they will make him pay for a bad decision.

Opposing quarterbacks have completed 59.6 percent with 12 touchdowns, 13 interceptions, 19 sacks and a 76.6 passer rating, second-lowest in the league. The Patriots tied for the league lead with 18 interceptions last season.

“We have to take care of the football and capitalize on mistakes,” Mayfield said. “It is one of those weeks where we have to be patient on our side of the ball and adapt. They are going to have some plays where they have it schemed up, and we just have to eliminate negative plays.”

Mixing in an explosive play or two could make the difference. The Browns rediscovered the deep ball against the Bengals, as Mayfield completed a 60-yard touchdown and a 26-yarder to Donovan Peoples-Jones and an 18-yard TD to tight end David Njoku.

“A lot of it had to do with defensive structure and scheme of what they played allowed us to take some of those shots down the field,” coordinator Alex Van Pelt said. “A lot of it was an emphasis on let’s throw the ball down the field. Talked to Baker before the game and said, ‘I have great confidence. If you see it, throw it.’ He showed that he can get that done.”

Cleveland’s missed opportunities to close out wins against the Chiefs, Chargers and Steelers added importance to every game the rest of the way. A win over the Patriots would be key in the AFC playoff picture and move the Browns within a half-game of the first-place Ravens (6-3) in the North.

“Right now, it’s anybody’s ballgame,” defensive end Myles Garrett said of the division. “These records are pretty close and we have a lot of division games left, and they dropped one for the rest of us in the AFC North. Now it’s like, hey, just keep on winning and see what happens.”

The Browns haven’t won in New England since 1992 when Belichick coached the Browns. He’s turned Gillette Stadium into a tough place for visitors.

“The tradition that comes along with it,” middle linebacker Anthony Walker Jr. said. “A lot of people say the ‘Patriot Way’ — they do not lose the game, they find a way to make you make the first mistake and then they capitalize. We have to go in there and we have to play smart ball. That is everything.