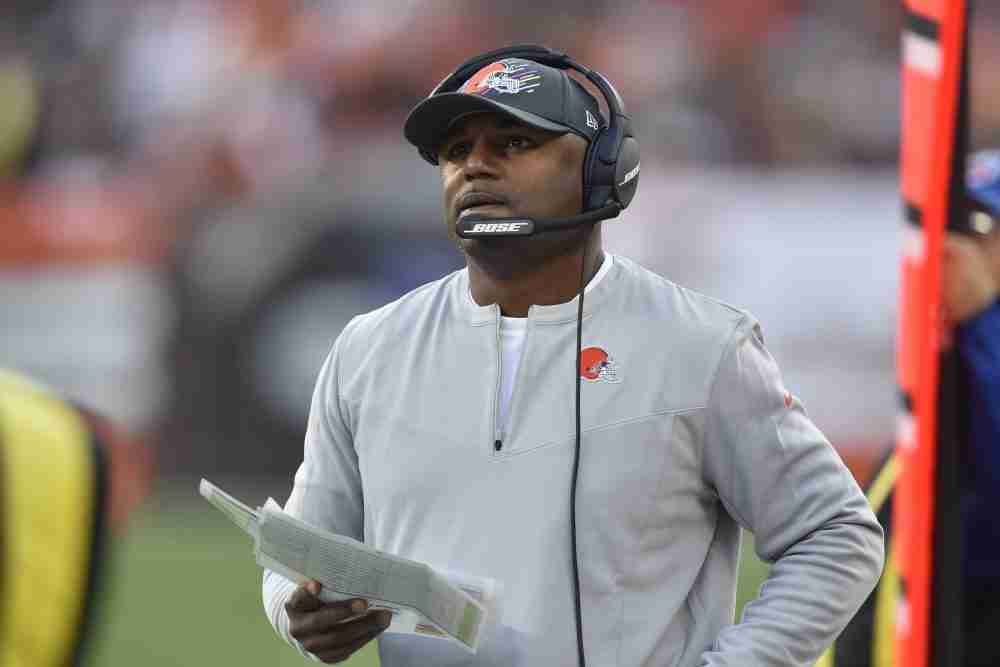 Q: Why has defensive coordinator Joe Woods been so hesitant to provide pressure in the form of blitzes & WR jams? It appears opposing QBs have had the most success on extended plays or quick throws before pressure arrives. This would solve both and it would help break Myles Garrett loose from the all the holding.

A: The factors are numerous but start with the trust in the front four to create pressure and the overall team philosophy of not giving up big plays by being too aggressive. If you’re offense relies on the run game and often sustaining long drives, it’s counterproductive to have a defensive style that leave you vulnerable to quick-strike touchdowns.

That doesn’t mean Woods doesn’t blitz — nickelback Troy Hill came free last week for an easy sack — but the optimal situation is getting to the quarterback with just the defensive line. No quarterback can succeed consistently when throwing into seven defenders in coverage and not having time to survey the field. The numbers say the strategy has worked. The Browns rank 23rd in the NFL by blitzing on 20.8 percent of the snaps, but they’re third with a 28.4 pressure rate. Woods said this week his nature is to be aggressive but he must mix up the calls so the opponent doesn’t know what’s coming.

As for receiver jams, cornerbacks across the NFL do that way less than in years past because if they miss the jam, look out. But with Denzel Ward and Greg Newsome II healthy after missing time with injuries and coming off a great game vs. the Bengals, I’d expect Woods to dial up more tight man coverage.

Q:
I thought Mac Jones’ ankle twist was the dirtiest thing I’ve seen in the NFL since the days of Conrad Dobler. Football is such an emotional game, can the Browns defense find a productive way to use Brian Burns’ “happy hunting” call as extra emotional juice?

A: I’ve seen worse — Ndamukong Suh and James Harrison come to mind — but the Jones’ play was certainly dirty and I’m appalled that he wasn’t fined by the NFL.

And I do think Garrett and the rest of the defenders added it to the pile of motivation. They can view Jones as an evil enemy who deserves all the punishment they can deliver.

Q: What excuse are they using why safety Grant Delpit plays so little??

A: The coaches haven’t been specifically asked about Delpit’s playing time in the last couple of weeks, but I believe the explanation is simple: They trust Ronnie Harrison Jr. more right now. Harrison has more experience, including in Woods’ system, and with John Johnson III being used more closer to the line of scrimmage, Harrison can play in the deep middle of the field.

Having said all that, Delpit took Harrison’s spot for two series against the Bengals. It was a predetermined move to get Delpit more reps in the base defense, in addition to those he’s been getting in the three-safety dime package.

Q: Will the Browns extend tight end David Njoku before the season ends?

A: My initial thought was no, but the more I consider it, the less I’m willing to rule it out.

Njoku is the most athletic and dangerous of the three tight ends and has been the most productive, leading the team with 21 catches and 341 yards and adding two touchdowns. He’s expressed his desire to stay in Cleveland for the long term, but the odds of a return drop once the season ends and free agency beckons.

While it’s possible something gets done over the next couple of months, I wouldn’t bet on it. I’m not sure an extension for Njoku is a priority for the organization and the money could be tricky.

A: Definitely. They’ll have to excel over a long period of time to match the careers of the creators of the Dawg Pound but certainly have the talent to do it.

Ward is often criticized for missing time each year with injuries, but he reminded everyone against the Bengals just how talented he is and how big of an impact he can make when healthy. And Newsome shows each week he’s not overwhelmed by playing at this level, competes every snap and has the physical skills necessary to succeed.

I expect Ward to get an extension at some point and this pair to be the cornerstones of the secondary for years to come.

A: It’s a legitimate question, especially with Odell Beckham Jr. gone last week and Higgins’ only three snaps coming after Donovan Peoples-Jones left to be checked for a concussion.

And the simple answer is the coaches view Higgins as less valuable than Jarvis Landry, Peoples-Jones and Schwartz. I don’t think anyone would argue about Landry and Peoples-Jones, so the conversation is about Schwartz being a greater part of the rotation and playing 28 snaps vs. the Bengals. Coach Kevin Stefanski needs a speed threat for his system to operate most effectively, and Schwartz is one of the fastest players in the league. (Higgins is below average.) I’d expect Higgins to play more than he did vs. the Bengals but don’t think he’ll move up in the rotation.

Mailbag: Why do teammates love OBJ after he quit on them?
Mailbag: Does playing Baker Mayfield despite injuries impede organization’s evaluation of him?