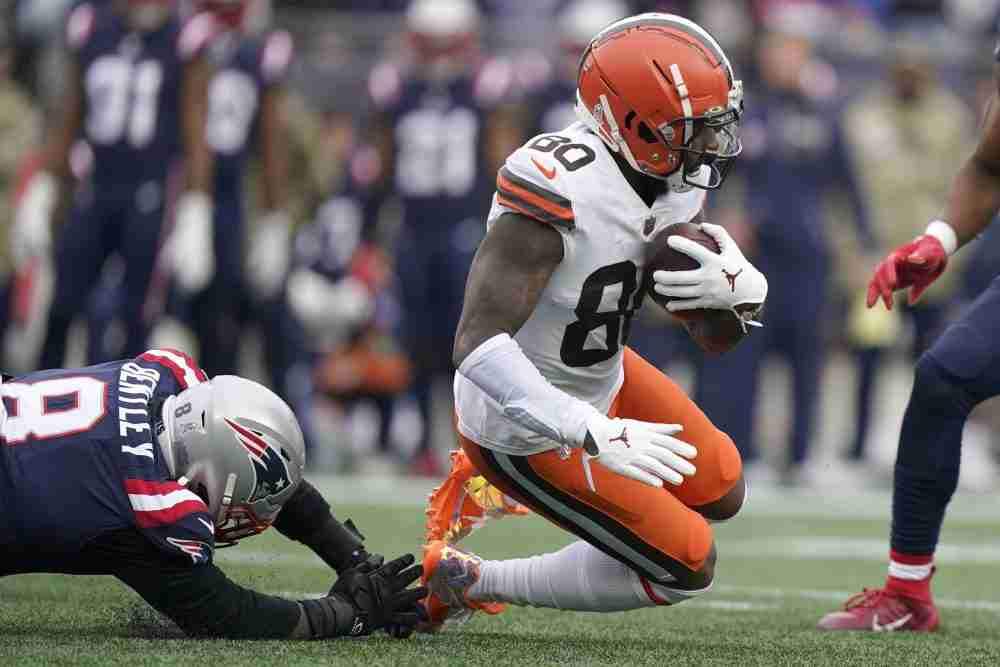 PARMA — The season hasn’t come close to living up to expectations for receiver Jarvis Landry.

“It definitely was something that hurt,” Landry said Tuesday at his Second Annual Thanksgiving Food Drive at Parma Senior High School. “It stung. It still does.”


“I haven’t been getting the ball so much, either,” he said. “But at the end of the day, I’ve been able to do with the opportunities I’m given.

“Yeah, I’m battling some things, but on Sunday, I always give everything that I have, and that won’t ever change.”

The Browns are 5-5 and in danger of not returning to the playoffs.

Despite the disappointments, he’s not giving up.

“If the pressure was never on, I think it’s on now to be able to go on a streak here and win every last one of them,” Landry said.

He hadn’t talked to reporters since Oct. 31 — before the Beckham drama exploded and the team decided to release him. Beckham signed with the Rams last week and caught two passes for 18 yards Monday night in a 31-10 loss to the 49ers.

Landry was already with the Browns when Beckham was acquired in a March 2019 trade. They had been teammates at LSU and believed they spoke their NFL reunion into existence.

It lasted 2½ seasons, and Landry was asked why things didn’t work with the talented Beckham in Cleveland.

Landry, who turns 29 on Nov. 28, said his season has been a “bit frustrating.” He sprained a medial collateral ligament in Week 2, went on injured reserve and missed games due to injury for the first time in his eight-year career.

He’s not at 100 percent and has only seven catches for 37 yards in the two games since the Browns-Beckham divorce. The Browns beat the Bengals 41-16 then lost to the Patriots 45-7 on Sunday.

Landry has 23 catches for 219 yards and no touchdowns in six games overall — he has a rushing touchdown — and didn’t have an explanation for why he isn’t getting the ball as much as he’d like.

Or why the passing game has struggled, ranking 26th in the NFL (209.7 yards a game). The Browns have scored 17 points or fewer in five of the last seven games.

When Beckham picked the Rams, Landry posted on Instagram “Meet you in the SB brudda.” He hasn’t given up on the Super Bowl dream and said the team’s goals are still attainable despite the 5-5 record and embarrassment vs. the Patriots.

“Absolutely they are, but it’s a narrow window now,” Landry said. “We’ve got to find a way to just continue to chip away one game at a time.

He said that begins this week, as the 0-8-1 Lions visit FirstEnergy Stadium on Sunday.

He was asked if the right energy and focus will be there Wednesday when the practice week starts.

The connection between quarterback Baker Mayfield and Landry hasn’t been as effective this season after Landry caught 236 passes for 2,990 and 13 touchdowns in his first three years with the Browns. But Landry got hurt on the second snap in Week 2 against the Texans and Mayfield’s dealing with a variety of injuries, including a torn labrum in his left, non-throwing shoulder suffered against the Texans.

“He’s a tough man, and he’s doing all the things necessary to make sure that he can be out there with us,” Landry said. “As playmakers, when the ball’s in the air, we’re doing our best and understanding and knowing that it’s the situation where he’s got to get healthy, but we’re still out here making plays with each other, for each other, and he always gives his best. That’s all you can ask for.”

Landry’s a team leader and will continue to try to rally the troops.

“We’ve had gradual conversations with numerous guys, but at the end of the day, the who we are is a collection of a lot of different things, players, coaches, the staff, just trying to make sure that we’re all on the same page and trying to move forward, win one game every week,” he said.

The food drive provided meals to more than 1,000 families in a partnership with the Greater Cleveland Food Bank and the Jarvis Landry Building Winners Foundation.

“It means everything,” Landry said. “Holidays are something that’s special, it’s about family, and to be able to come out here and give back to this community is something that I’ve always done, and it means a lot to me, as well.”