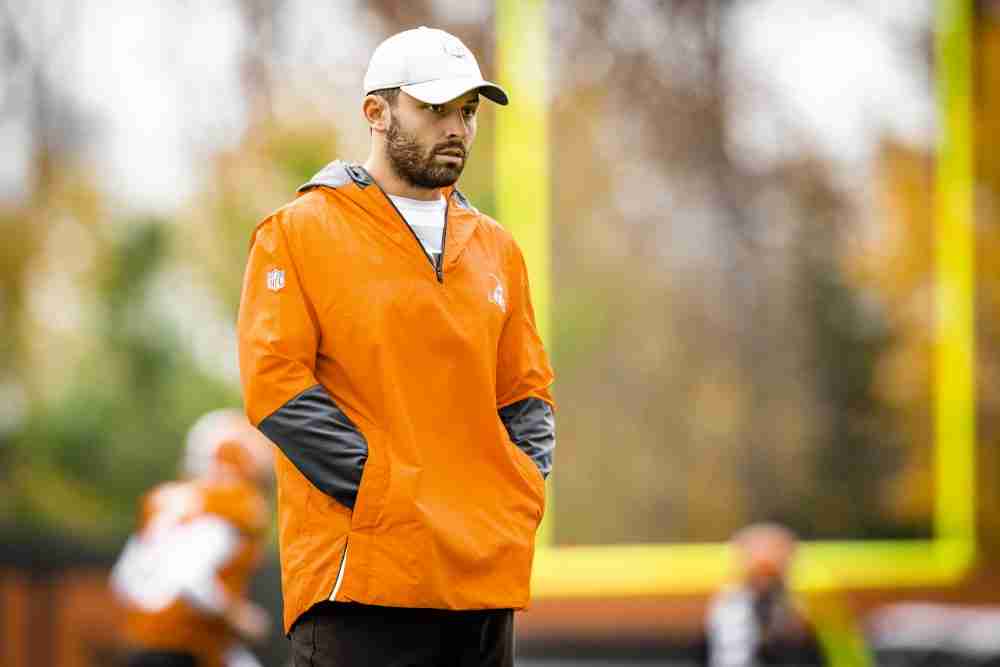 BEREA — Baker Mayfield’s right leg went numb Sunday when he was hit and landed awkwardly against the Patriots. Add the resulting painful right knee bruise to the torn labrum and fracture in his left shoulder and a sore left foot, and this is “probably the most beat up” he’s been in his career.

The passing game that rests on his right arm has been inefficient, ranking 26th in the NFL with 209.7 yards a game. Receiver Odell Beckham Jr. is gone, receiver Jarvis Landry isn’t happy with his targets and the receiving corps has combined for five touchdowns through 10 games.

The season is at a critical stage with the Browns 5-5 and coming off a 45-7 loss Sunday at New England.

“It’s been tough, but I don’t think anybody gives a damn,” Mayfield said Wednesday when asked about the mental challenges he’s faced this year. “There’s no reason to get into that. Nobody cares or wants to feel bad for us, so it is what it is. It’s all right.”


#Browns Baker Mayfield on how tough this season has been mentally. pic.twitter.com/6kDV7Gnf1N

Such is life as the starting quarterback on an underachieving team.

Mayfield didn’t practice Wednesday but watched — looking like a coach in a baseball cap and windbreaker — and plans to play Sunday against the Detroit Lions at FirstEnergy Stadium.

“At this point I’m just taking it one day at a time,” he said. “I have plenty of time until Sunday, so we’ll see what happens.”

Coach Kevin Stefanski is “confident” Mayfield will play vs. the Lions, who are 0-8-1 after a tie Sunday in Pittsburgh.

“As you guys know, Baker is as tough as they come,” he said. “He is sore. He is fighting through it. That is kind of what you expect from him.”

The Browns are in desperate need of a win in their quest to make the playoffs for a second straight year, and Mayfield doesn’t want to miss a game despite the potential benefit of rest. He didn’t mind sitting out Wednesday because much of the work early in the practice week is mental at this stage in the season.

“There’s no reason to make things worse if I don’t need to,” he said.

Playing in the game is a different deal.

“We will never put a player out there who is not ready, but if he is ready to go, he will play on Sunday,” Stefanski said.

The right knee injury happened Sunday in the third quarter, and Mayfield was still limping Wednesday.

“Nothing structural with the bones or anything like that, so caught the nerve on the outside of my leg, made it go numb, so the outside of my knee is sore and tender but that numbness where you can’t feel your leg is pretty scary,” he said. “Hadn’t had that before, but another new thing for me.

“Pretty sore. One day at a time at this point, but I’ll be good.”

When Mayfield’s been injured before, he answered emphatically that he’ll play the next game, including when he left FirstEnergy Stadium in a sling this season after the loss to the Cardinals. But after the game Sunday, he said “we’ll see day by day.”

“This is probably the most beat up I’ve ever been in my career, and it’s not like it’s one particular thing, it’s multiple,” he said Wednesday. “It’s just that time of the year and things add up, a couple of things after another, so it is what it is.”

The run of injuries started in Week 2 with the torn labrum. He’s had some strong games since, including a 132.6 passer rating Nov. 7 in Cincinnati, but hasn’t been consistently effective like he was in the second half of last season. He was 11-for-21 on Sunday for a career-low 73 yards with a touchdown and an interception.

The injuries are an issue.

“Yeah, there’s definitely a couple plays where I look back and say I should have used my feet here and there, but you have to adapt,” Mayfield said. “Nobody is going to feel bad for you. It’s not an excuse. You just have to find a way to make a play.”

He and the Browns haven’t done nearly enough of that in the passing game. The explosive plays have been missing for much of the year, with the recent exception of the 41-16 win in Cincinnati on Nov. 7, and the wide receivers have largely been an afterthought.

“There’s a lot of factors, but we’re working on it and doing whatever it takes to get it fixed,” Mayfield said. “We don’t need to reinvent the wheel. Yeah, changes need to be made, but execution and there’s plays to be made that we haven’t. We need to be able to execute and put the ball in our playmakers’ hands and let them go to work.

“Go out there and play for each other and execute the game plan and find a way to make the plays, and make enough plays to win the game.”

A lopsided loss like the one to the Patriots leads to soul-searching, especially when it follows a season-long pattern of inconsistency. The players and coaches have talked a lot about being accountable to each other.

“Tough conversations, realization, being honest with yourself. It’s a humbling process, it’s very easy to look around and try and find excuses.”

He said leaders like himself and Landry are charged with making sure the team has the right mindset.

“These are the times we’re counting on Jarvis to be the leader he is, to grab the extra guys in the locker room, to make sure everybody’s got that focus on this week and to realize that it feels like our season’s over but we’re sitting here at .500 with a lot of division ball left,” Mayfield said. “We’re counting on all of our leaders to step up and do those things. That’s what you bring these guys in here for, and so let’s bring that accountability we talk about is holding to that standard and living up to it every day.