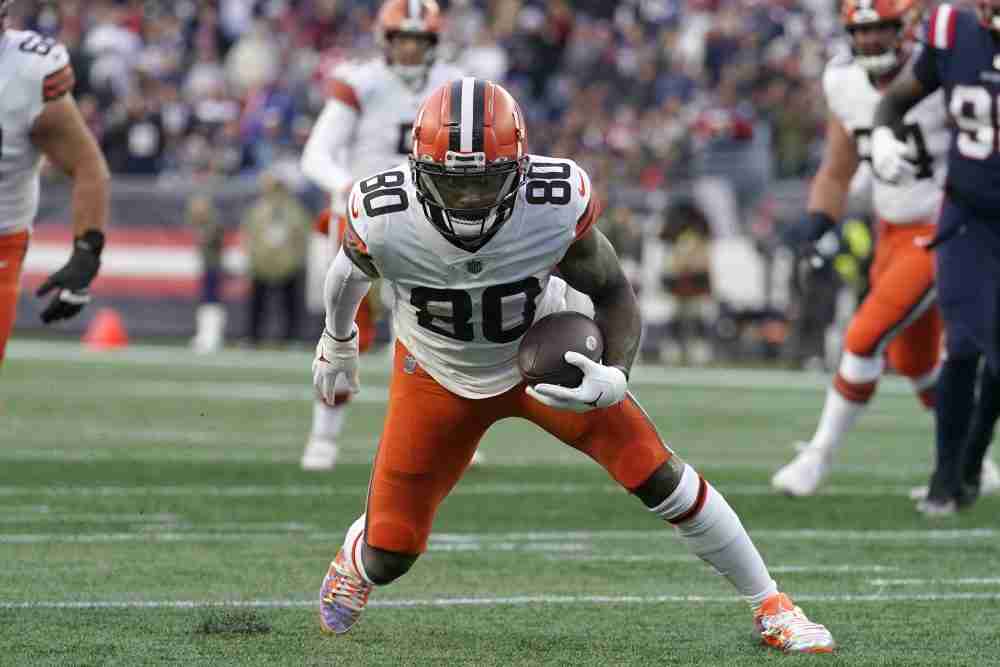 BEREA — Receiver Jarvis Landry would like the ball more, and coach Kevin Stefanski and quarterback Baker Mayfield would be happy to get it to him.

They may not have many other options, as the Browns could be short-handed at receiver Sunday against the Lions.

Odell Beckham Jr. is with the Rams, Donovan Peoples-Jones was limited Wednesday in practice after suffering a groin injury and rookie Anthony Schwartz (concussion) didn’t practice. That leaves Landry, Rashard Higgins and Ja’Marcus Bradley on the active roster.

Peoples-Jones started limping after running a route and stopped practicing during the early portion open to reporters. He was listed on the injury report as limited and missed two games last month with a groin injury.

Landry was asked Tuesday about his lower-than-usual production — 23 catches for 219 yards and no touchdowns in six games.

“I haven’t been getting the ball so much, either,” he said. “But at the end of the day, I’ve been able to do with the opportunities I’m given.”

He’s not 100 percent after missing four games with a sprained medial collateral ligament and aggravating it Oct. 21 in his return. He didn’t practice Wednesday.

“I do not think he feels great, but he is battling,” Stefanski said.

In four games since returning from injured reserve, Landry has 17 catches for 139 yards.

“We’ll find ways to get Jarvis involved back in the game plan, there’s no doubt about that,” Mayfield said. “He’s a tempo-setter for us, he’s an extremely good leader and locker room guy for us, everybody knows that.”

Schwartz was injured Sunday in the 45-7 loss to the Patriots when he was hit helmet to helmet returning a kickoff. Stefanski said he’ll have a better idea later in the week if Schwartz can play.

Higgins has long been one of Mayfield’s favorite targets but has only 14 catches for 168 yards and a touchdown in 10 games, including no catches in the last two games.

“When it comes to Higgy, just going through my reads and putting the ball in a position where he can catch it and make plays when it’s necessary, but not trying to force it and overdo it,” Mayfield said.

The coaches trust Higgins if he’s needed to take on a bigger role.

“Rashard is doing a great job,” Stefanski said. “He is doing everything we are asking of him. We may call on him more as guys are unavailable. We want all of our pass catchers to touch the ball.”

Mayfield got emotional when asked about Julius Jones, who’s on death row in Oklahoma and scheduled for execution Thursday. Mayfield has been a strong and outspoken advocate for Jones.

“Yeah, it’s pretty rough, to be honest with you,” he said. “That’s not something that’s easy to talk about. Been trying to get the facts stated and the truth to be told for a while.

“But it’s tough to think about. Tried and tried. It’s a shame that it’s gotten this far, 24 hours away. So it’s tough. You know, hopefully God can intervene and handle it correctly and do the things he needs to do.”

#Browns Baker Mayfield gets emotional talking about scheduled execution of Julius Jones, whom he’s advocated for to be released from death row. pic.twitter.com/0Fkw07xdBf

Republican Gov. Kevin Stitt can grant clemency but hasn’t announced a decision. The Oklahoma Pardon and Parole Board voted 3-1 on Nov. 1 to recommend clemency.

“Myles has the right to say what he wants to say. But as long as we’re all making the right decisions to really go out here and change for the better, then that’s all that matters,” Jackson said. “Me, personally, I think I just need to be better. I thought Coach Woods put us in the right position. I thought we had a good game plan. Guys just weren’t in the right spot and they kept finding those little holes, those crevices and getting through them.”

Jackson said he has “no question” Woods has the trust and buy-in of the players.

“I think he does a great job of really coming in, accepting blame, because it starts with him first and then it rolls downhill pretty fast,” Jackson said. “But I think it’s nice to have a coach that takes accountability and understands that we’re all in this together and that just doesn’t say it but really accepts it and tells us that.”

Beckham signed with the Rams last week and debuted Monday night. Fox Sports’ Jay Glazer said on the “Pat McAfee Show” that other teams courted Beckham but he pursued Los Angeles after the Browns cut him.

“Odell’s been trying to go to the Rams for a long time,” Glazer said, adding Beckham told him he wanted to go to Los Angeles even in the days after he was traded to the Browns in 2019.

Stefanski said the Lions drastically changed their offensive scheme during the Week 9 bye week. They ran the ball 39 times for 229 yards last week in the 16-16 tie against the Steelers, often using an extra lineman.

** Run game coordinator/running backs coach Stump Mitchell visited practice as he deals with a knee issue that prevents him from coaching.

** Receiver Isaiah Zuber was cut from the practice squad.