Joe Woods says he’s not bothered by Myles Garrett’s criticism, they have great relationship and everyone’s frustrated by performance vs. Patriots 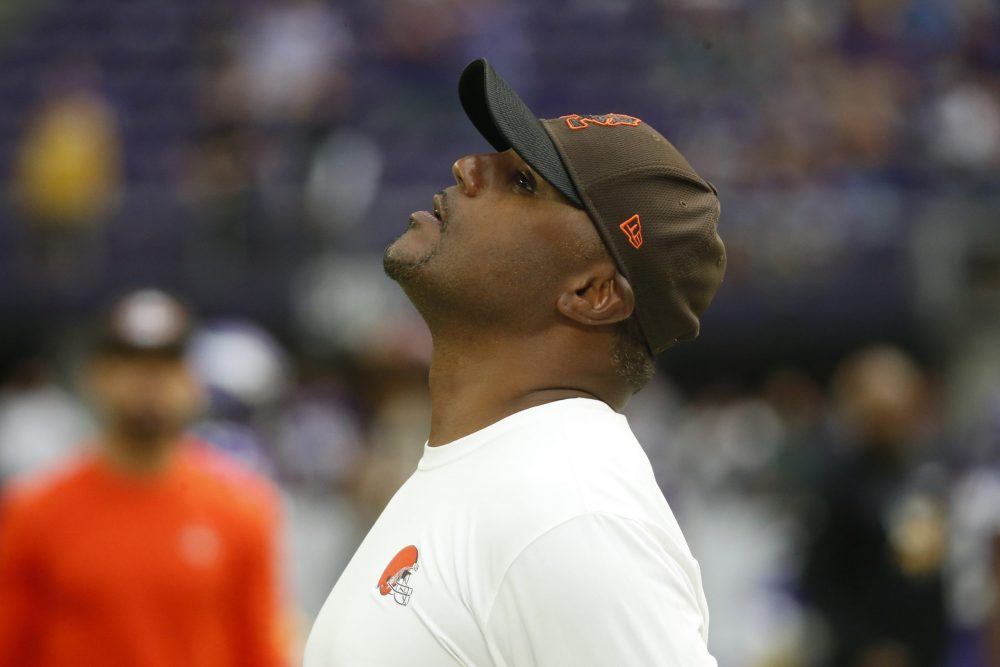 BEREA — Joe Woods is troubled by the 45 points scored Sunday by the Patriots, the season-long struggles on third down and in the red zone and the recurring inability to stop reverses.

Don’t put Myles Garrett publicly criticizing the lack of adjustments vs. the Patriots on the list.

“That stuff doesn’t really bother me,” Woods said Thursday. “If there’s anything that’s on your mind and you want to come talk to me, the guys know I’m there.”

The embattled defensive coordinator didn’t sleep much Sunday night after the loss in New England and remains irritated by the Patriots’ big day that included 452 total yards, 184 rushing yards and conversions on their first six third downs.

Woods became the primary target for many critics when the defense put up little resistance against rookie quarterback Mac Jones and the Patriots. Garrett’s postgame comments turned up the intensity on the harsh spotlight.

“We didn’t make adjustments, as in they kept on scoring and we weren’t countering that,” Garrett said.

Woods said he talked to Garrett walking off the field at halftime. They’ve talked since but not about Garrett’s interview.

“I have a great relationship with Myles,” Woods said. “He has the respect of all the players on defense. There’s nothing going on within the building or anything of that nature.

“I talked to him today, so everything’s good. It’s just frustrating losing the way we did.”

Woods lamented the inability to get off the field in the first half, as the Patriots converted third downs of 8, 6, 13, 1, 5 and 9 yards. After a three-and-out to start the second half, the defense continued to be dominated.

“We tried to fix it,” Woods said. “When you lose that way, everyone is trying to figure out what happened as coaches, as players and we’ve just got to make sure we work together, communicate and get things fixed.”

“We’ve definitely made some adjustments and talked about things we can do better,” Woods said. “First of all, I put a lot of pressure on myself to make sure the game plan’s right. So I’m not saying I blame myself but I always look in the mirror first.”

Safety John Johnson III also seemed to take a shot at Woods after the game when he said the Patriots copied things other teams had done successfully against the Browns earlier in the season.

“I have a really good coaching staff, we try to address all the issues that show up, correct all the mistakes,” Woods said. “We look at ourselves, we self-scout ourself every week and then we try to run those plays in practice that we’ve gotten from teams where we haven’t had success.”

The reverses and end-arounds by the Patriots reminded Woods of what the Steelers did against the Browns.

“I’d like to predict when they’re going to run a screen or a reverse,” Woods said. “You have to rely on guys executing their responsibility and their job whatever you call. And we weren’t good on Sunday.”

Veteran defensive tackle Malik Jackson complimented Woods for taking accountability, said there’s “no question” the players trust him and he does well handling the criticism from fans.

“He’s the same guy every day, comes in, smile on his face,” Jackson said. “Now we understand there’s a fire under his butt because of what happened last week, all of our butts, but to say that he’s sitting there moping around upset or feeling pressure and putting it on us, I don’t feel that.”

At 5-5 and with little remaining margin for error in the drive to return to the playoffs, the pressure is mounting. But Woods believes the defense remains united.

“Absolutely. You feel the chemistry, you feel the family, the brotherhood,” he said.

Rookie cornerback Greg Newsome II said no one is panicking.

“I have a lot of respect for Joe Woods. He’s been in the league for a minute, he’s coached a lot of great defenses, so you’re going to respect a guy like that already. He knows what to call.”

Woods considers the defense’s identity as “being multiple” and able to adapt to each opponent.

After reviewing the film, Woods didn’t make any personnel changes but tweaked the coverage plan.

“It’s just everybody just doing their job and it’s up to me to put them in the right calls where they can have success based on what people are trying to do,” he said.

Special teams coordinator Mike Priefer spent three years with Woods on the Vikings staff and is convinced he’s the right man for the job.

“I love the way that he works with the players,” Priefer said. “He has always been a very, very good detail, technique coach. In fact, I used to go into his meetings.

“I think Joe is an outstanding football coach. We have had a lot of really good games. I know he is getting some criticism for some games, but he has done a phenomenal job with our team. Without our defense, we probably would not have won three or four of these games. I have a ton of confidence in him, and I know our players do, as well.”