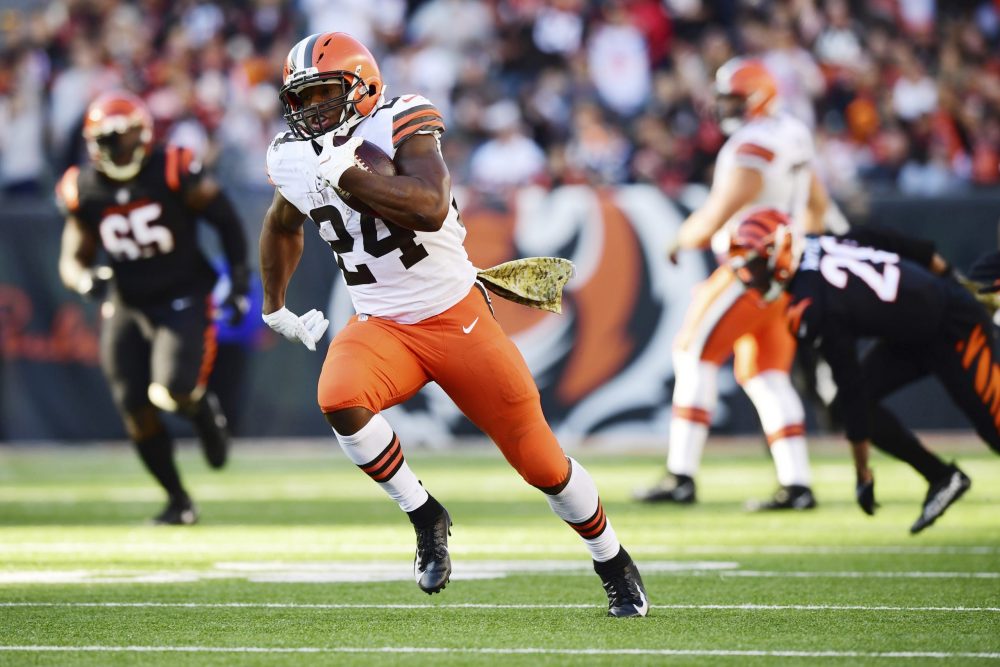 Chubb and rookie running back/receiver Demetric Felton tested positive Nov. 9 and are eligible to be activated after 10 days as long as they’re asymptomatic.

“That will help. I think things are trending in the right direction for the other guys,” coordinator Alex Van Pelt said. “Maybe we will get to see them later in the week as the protocols run out for those guys. We are hoping.”

Chubb ranks third in the NFL with 721 rushing yards and is tied for the lead with 6.0 yards per carry. Van Pelt was optimistic he’ll be in condition to play Sunday if cleared.

“Guys come off the COVID list and play all the time across the league,” he said. “So if he’s available, I’m sure we’ll be very smart with how we handle his carries, but he’s obviously a big part of what we do offensively.”

Receiver Donovan Peoples-Jones (groin) didn’t practice and worked on the side. He was injured Wednesday running a route.

“God is GREAT!!!” Mayfield tweeted. “Thank you to everybody that prayed and continued to pray! @JuliusOklahoma”

God is GREAT!!! Thank you to everybody that prayed and continued to pray! @JuliusOklahoma

Jones was scheduled to be executed Thursday afternoon, and Stitt’s announcement came only hours before. Mayfield has been a strong advocate for Jones and was emotional Wednesday when asked about the situation.

Running back D’Ernest Johnson not only started the Patriots game with a bang — 58 yards on four carries on the first drive — he ended with one.

“He catches the ball out of the backfield and runs down the field — whatever it was, 15 yards — and he had two defenders coming in on him,” Van Pelt said of an 18-yard gain on Cleveland’s final possession. “Nine out of 10 backs in this league would have stepped out of bounds, and he put his shoulder down. This guy loves football, and I love that he is in our room.”

Joe Woods says he’s not bothered by Myles Garrett’s criticism, they have great relationship and everyone’s frustrated by performance vs. Patriots

NO TIME TO RELAX

Tight end David Njoku had a touchdown in his hands but failed to secure the ball before New England’s Adrian Phillips knocked it away.

“It was a very lazy play on my behalf,” Njoku said. “I have no excuse for that. So now I’m playing like I have my hair on fire.”

He later dropped a second pass.

Special teams coordinator Mike Priefer is a proud graduate of the U.S. Naval Academy and applauded the NFL’s “Salute to Service” throughout November.

“It is a really special moment,” he said. “I do want to point out that two weeks ago we had a helicopter flyover in Cincinnati, and they timed it perfectly. Last week, the jet flyover was like 30 seconds late, so the helicopters got it right.”

** Njoku said the departure of friend Odell Beckham Jr. doesn’t affect his desire to sign an extension with the Browns.

** Priefer was upset that JoJo Natson backed up too far and didn’t catch a punt against the Patriots that bounced and cost the Browns about 20 yards of field position.

Notes: Baker Mayfield vows to get Jarvis Landry involved in game plan
Nick Chubb activated from COVID-19 list; Lions preparing for him to carry the load