Nick Chubb activated from COVID-19 list; Lions preparing for him to carry the load 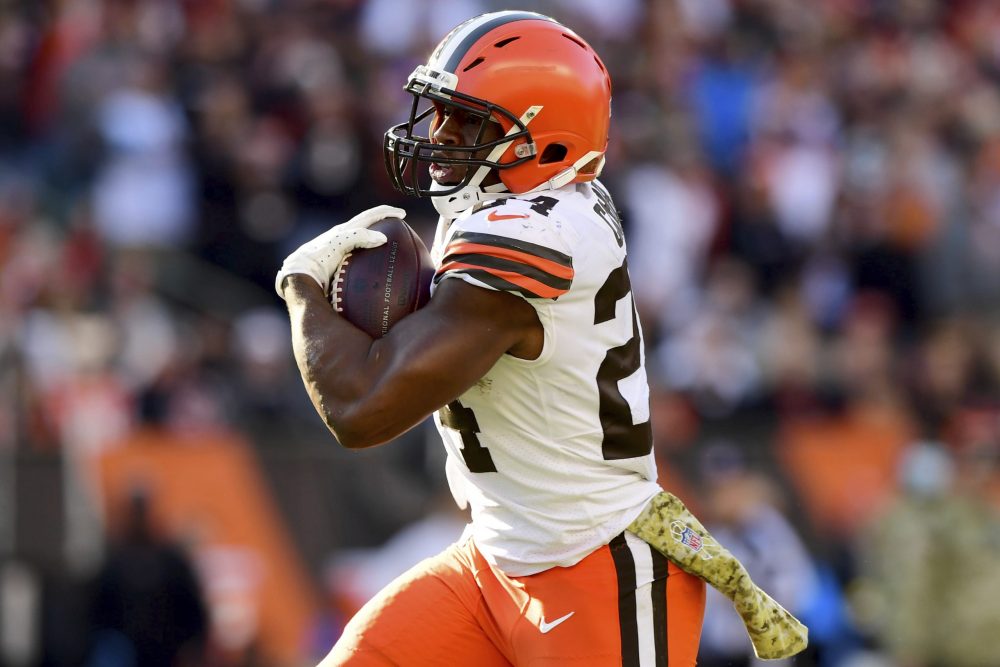 The two-time Pro Bowl running back was activated from the COVID-19 list Friday and immediately got into game mode.

“I like to practice how I play, so I won’t have anything on in the game, so that’s what I like to have on in practice,” he said. “It’s killing me now, I stopped moving now, now I feel it.”

At 5-5 and coming off a 45-7 loss to the Patriots, the Browns need a spark. The return of the offense’s best player could provide it beginning Sunday against the Lions at FirstEnergy Stadium.

Chubb ranks third in the NFL with 721 rushing yards and is tied for the lead with Ravens quarterback Lamar Jackson with 6.0 yards per carry. Chubb has six touchdowns.

“It’s great to have No. 24 back,” defensive end Myles Garrett said. “He’s the man. One of the best in the league and a great locker room guy. I know you all don’t see it much, but he’s more talkative than he gives off.

“It’s great to see him out here, especially in no sleeves. He doesn’t care about this cold.”

“I was happy to see everybody, happy to get back out here with the boys and had a good practice,” Chubb said.

He’s vaccinated and said he felt “great” during the time away other than one day but understood why he couldn’t play.

“I could put other people at risk, and that was my mindset,” he said. “Even though I felt good, I felt like I could play possibly, I still had it in my system.”

Coach Kevin Stefanski said he’ll be mindful that Chubb missed time when deciding his workload for Sunday but noted he looks good and has “fresh legs.”

“I’m ready for whatever,” Chubb said.

“His teammates were excited to see him,” Stefanski said. “Nick is very important to what we do and who we are.”

“They’ll try to run this offense through Chubb,” he told reporters. “He’s a special player. If there is such a thing as being underrated, he may be one of these underrated backs in the league. You can argue he’s the best or top two or something.

The forecast calls for rain, temperatures in the 40s and 15 mph winds.

“It doesn’t matter to me,” Chubb said. “Can’t control it at all, it is what it is, we’ll deal with that when it comes.”

D’Ernest Johnson filled in for Chubb — Kareem Hunt remains on injured reserve with a calf injury — against the Patriots and rushed for 99 yards and caught seven passes for 58 yards.

Felton, a sixth-round pick out of UCLA, has 13 catches for 147 yards and a touchdown in nine games. He’s rushed three times for 16 yards and averaged 8.4 yards as the punt returner.

“He is going to be OK to play,” Stefanski said. “He is also going to catch punts out there, as you can see, until it gets dark.”

Chubb missed two games earlier in the year with a calf injury, and the Browns are 1-2 without him. He said it was tough to watch the debacle vs. the Patriots.

“Seeing my team out there and not having things go our way, it was hard for me to watch,” he said. “But it’s a new week, a new opportunity. We still have everything ahead of us. We got to come out here, had a great practice and got to keep moving forward.

“We’ve shown on offense what we can be and it’s just a matter of doing it week in and week out, being more consistent.”

Putting the ball in Chubb’s hands is a great way to start.

“I know this: If we don’t have population around the football with this guy, or we don’t try to wrap up and buy some time for our teammates to get there, this guy will make you look bad,” Campbell said. “But we understand that, too, our defense knows that.”