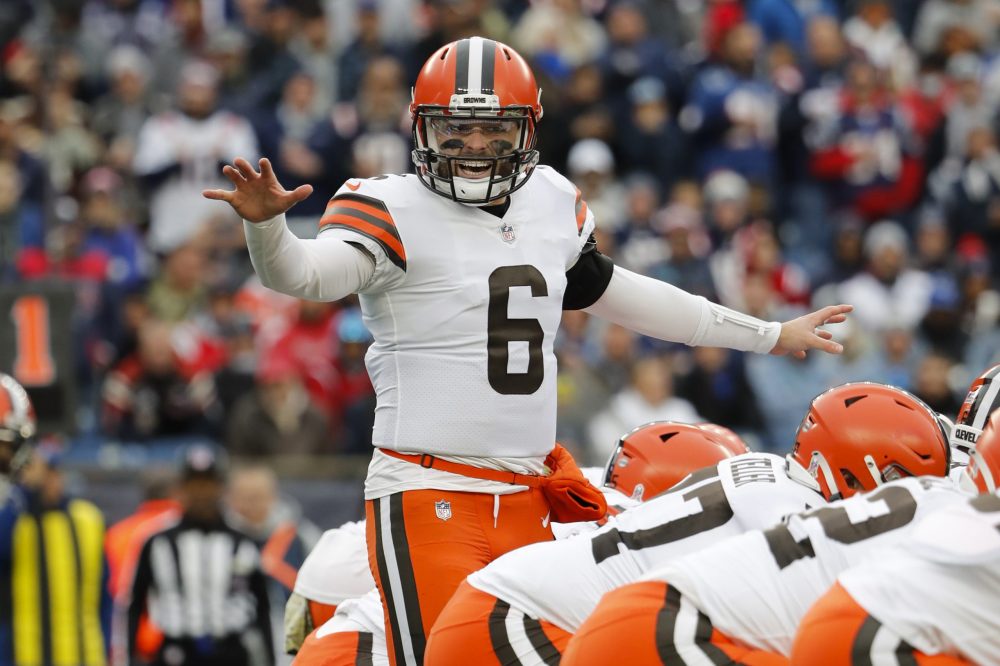 BEREA — The Browns will have their starting quarterback and former No. 1 overall pick.

Mayfield missed practice Wednesday and was limited Thursday with a sore knee after it was bruised Sunday in a 45-7 loss to the Patriots in which he threw for a career-low 73 yards. He’s also dealing with a torn labrum and fracture in his left, non-throwing shoulder and a sore left foot.

The Lions will most likely be without Jared Goff, who was the No. 1 pick of the Rams in 2016, two years before the Browns took Mayfield. Goff was traded to the Lions after last season and has an oblique injury that affects his throwing.

Goff didn’t practice all week and was listed as doubtful.

Tim Boyle, 27, is slated to make the first start of his career. He was undrafted out of Eastern Kentucky and appeared in 11 games with the Packers in 2019 and ’20, mostly to take a knee in the victory formation.

“Our scouts do a great job of preparing the staff for who we may see, whether it is Boyle or (David) Blough,” Stefanski said. “Boyle was a guy, if you remember, we evaluated coming out of college potentially as a free agent. He was in Green Bay for a couple of years. I feel like we know these guys, and based on who is out there, we will adjust accordingly.”

Boyle’s right (throwing) thumb broke in the preseason, he had surgery, was placed on injured reserve and activated Friday.

“He lacks zero confidence, I can tell you that,” Lions coach Dan Campbell told reporters. “He’s got plenty of confidence.

“That’s a good thing, but it can also … you know what I mean. I know this, we have to be smart with him and let him work into a rhythm.”

Defensive end Myles Garrett was surprised to hear Goff wouldn’t be starting and said he didn’t know much about Boyle.

“I have to do my research,” he said. “I wasn’t sure if Goff was going to play, so now get to it. Still got a lot of time for film study.

“We’ve got to force their hand, where if they can’t run the ball well, he’s got to make plays. And then see what we can do.”

Receiver Donovan Peoples-Jones (groin) returned to practice in a limited role after sitting out Thursday and was listed as questionable. He was injured Wednesday running a route and stopped practicing.

Regardless of Peoples-Jones’ status, the Browns will be short-handed at receiver with rookie Anthony Schwartz (concussion) ruled out. Jarvis Landry, who’s battling a knee injury, Rashard Higgins and Ja’Marcus are the other wideouts on the active roster.

Nick Chubb activated from COVID-19 list; Lions preparing for him to carry the load

Rookie starter Greg Newsome II is expected to move into the slot against three-receiver sets, with Greedy Williams taking his spot outside.

** Defensive end Takk McKinley (groin) was listed as questionable after being limited all week. He didn’t play Oct. 31 against the Steelers, was limited to 12 snaps Nov. 7 against the Bengals and was inactive against the Patriots.

** Safety Ronnie Harrison Jr. missed the start of practice for a personal reason.

Stefanski was tired of penalties — the Browns are tied for third in the NFL with 70 and second with 644 yards — so a few weeks ago he went to a policy of restarting a practice period if there’s a penalty at any point.

The change can mean longer practices, but Stefanski is OK with that.

“We’re really trying to focus on the details and just get things right because those are things you can control,” left guard Joel Bitonio said. “I know we’ve been one of the worst penalized teams in the league and that’s not something we want to be.”

The Browns are preparing for rough conditions with rain and wind in the forecast.

“We understand that ball security is a premium. All of the guys that touch it — center-quarterback exchange, the exchange between the quarterback and the running backs and catching the ball in adverse conditions — are all things that you have to prepare for, and you have to work at those during this week.”

Garrett won’t be surprised by anything.

“It’s Cleveland. It’s cold and it rains almost every other day,” he said.