At a crossroads: How Browns wound up 5-5 and facing a must-win vs. Lions 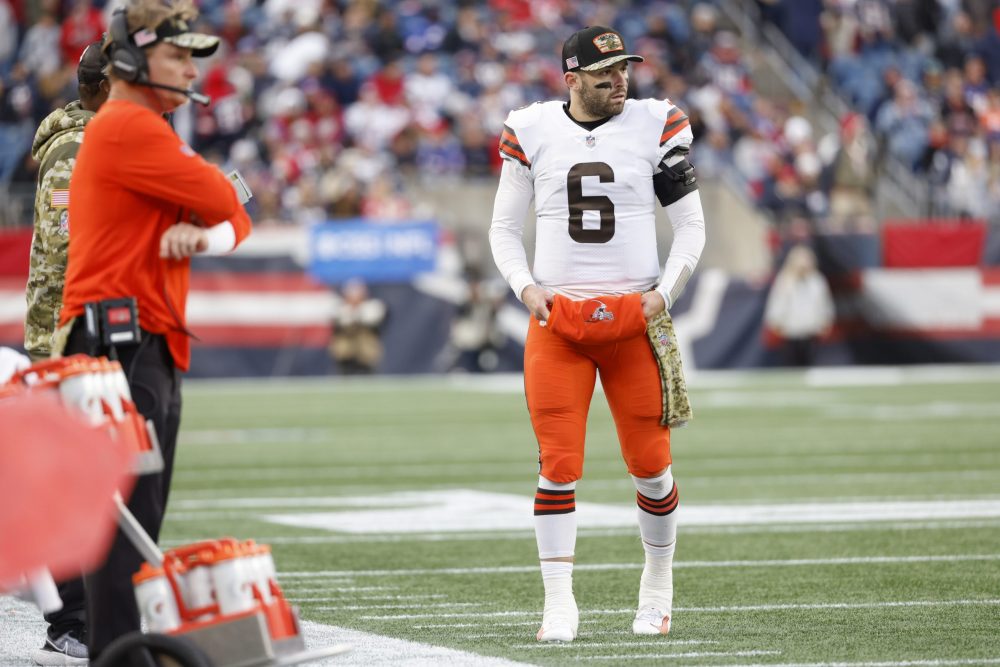 A must-win against the Lions wasn’t what the Browns expected heading into Thanksgiving.

That’s exactly what they face at 5-5, coming off a 45-7 loss to the Patriots and with the rest of the schedule occupied by teams with winning records.

The season isn’t over by any means — the Ravens lead the AFC North at 6-3 and the rest of the AFC playoff picture is a crowded mess — but things have to change.

The Browns not only can’t afford a loss to the Lions (0-8-1) on Sunday at FirstEnergy Stadium, they have to find their footing before two straight games against the Ravens with a bye in the middle.

Here’s how the Browns got to this pivotal point:

Baker Mayfield played so well over the second half of last season in leading the Browns to the playoffs that a contract extension seemed to be a foregone conclusion. A second year in coach Kevin Stefanski’s system and continuity across the offense figured to push him into the league’s quarterback elite.

Starting in Week 2, Mayfield has been hampered by a variety of injuries, including a torn labrum and fracture in his left, non-throwing shoulder. The latest is a right knee bruise that slowed him in practice during the week.

“This is probably the most beat up I’ve ever been in my career, and it’s not like it’s one particular thing, it’s multiple,” he said.

The injuries have made it increasingly difficult to evaluate Mayfield’s season and whether he’s worth a big-money, long-term extension. Would he have taken the expected leap without them? Are they to blame for his inconsistent performance that includes a season-high 132.6 passer rating against the Bengals followed by a career-low 73 passing yards against the Patriots.

As the trigger man, Mayfield is most responsible for the passing game, which hasn’t been as efficient or explosive as desired. It ranks 26th (209.7 yards), and coordinator Alex Van Pelt summarized the state of things when discussing the early deficit against New England.

“That is not when we are at our best is when we have to throw the football for whatever reason,” he said. “When we are rolling is when we are play-action, run-action and keeper game and it all ties in together.”

Not being able to count on the dropback passing game is a tough way to live.

“We are built to run the football and take what comes off of that,” Van Pelt said.

If Mayfield is moving OK, he’ll have a good chance to get rolling in the next few weeks. The Lions rank 30th with an opponent passer rating of 104.9, and the Ravens are last with 283.3 passing yards allowed a game.

The defense was supposed to be dominant after an offseason of transformation.

It’s too often been a disappointment.

Most frustrating is that the talent seems much improved over a year ago: ends Jadeveon Clowney and Takk McKinley, linebacker Jeremiah Owusu-Koramoah, safeties John Johnson III and Grant Delpit and cornerbacks Greg Newsome II, Troy Hill and Greedy Williams.

Clowney and McKinley have combined for five sacks and haven’t consistently taken advantage of all the attention paid to All-Pro end Myles Garrett. The run defense didn’t live up to its top-five ranking in losses to the Steelers and Patriots. The secondary had too many blown assignments early.

And the takeaways that save the offense and change the game have been few and far between. The defense has seven in 10 games, including three against the Bengals.

Coordinator Joe Woods has received the bulk of the blame, especially after the embarrassment in New England. He defended a general lack of aggression in his calls by saying the unit’s identity is being multiple and able to adapt to the opponent.

If the defense doesn’t string solid outings over the final seven games, Stefanski could replace Woods following the season.

The injuries go well beyond Mayfield. While they’re not an excuse, they’ve been a theme of the season and can’t be dismissed.

Left tackle Jedrick Wills Jr. was in and out of the lineup for the first six weeks, including missing two games. Right tackle Jack Conklin will miss his fifth game Sunday, two with a knee injury and the last three with a dislocated elbow. Sixth lineman Chris Hubbard was lost for the season with a triceps injury in the opener.

Even the sturdiest and most reliable have succumbed. Receiver Jarvis Landry was sidelined for four games with a sprained medial collateral ligament, and running back Kareem Hunt will miss his fifth straight Sunday with a calf injury. They had never missed a game due to injury in their careers.

“If we can have all our guys, that’s better for the team,” Chubb said. “I think we’re starting to get healthy now. Hopefully that means good for us.”

The offense couldn’t make things work with superstar Odell Beckham Jr., and that’s only part of the problem at receiver.

Of the 10 passing touchdowns, five have been to wideouts, including rookie Demetric Felton, who also plays running back. Against the Patriots, the receivers combined for five catches and 42 yards.

The Browns’ reliance on two- and three-tight end sets reduces opportunities for the receivers, but the team needs more from them. Landry isn’t 100 percent after the knee injury, but committing to getting the ball to the heart and soul of the offense would be a big boost to the production.

“We certainly want to get our wide receiver group going,” Stefanski said. “The truth is we just have to be better.”

The conversation would be much more positive if the Browns had closed out a couple of games. They led the Chiefs, Chargers and Steelers in the fourth quarter but lost to them all.

While the Browns have taken care of business against the subpar teams and played their most complete game against the Bengals, all five losses came to playoff contenders — the three blown leads and lopsided defeats to the Cardinals and Patriots.

Mayfield must be mentioned with the fourth-quarter troubles. He had a chance to lead go-ahead drives against the Chiefs, Chargers and Steelers but came up empty each time. He wasn’t the sole culprit but didn’t save the day.

“We want the standard to be a playoff team,” left guard Joel Bitonio said. “We want to win our division, we want to be competing for those things every year and we haven’t performed like that this year. But there’s a lot of season left. We’re focused on that and hopefully by the end of the year it’s back to our standard.”

Browns-Lions Preview: 3 things to watch, 3 key numbers, the prediction
Commentary: Desperate for a win, Browns settle for an ugly one over a bad team