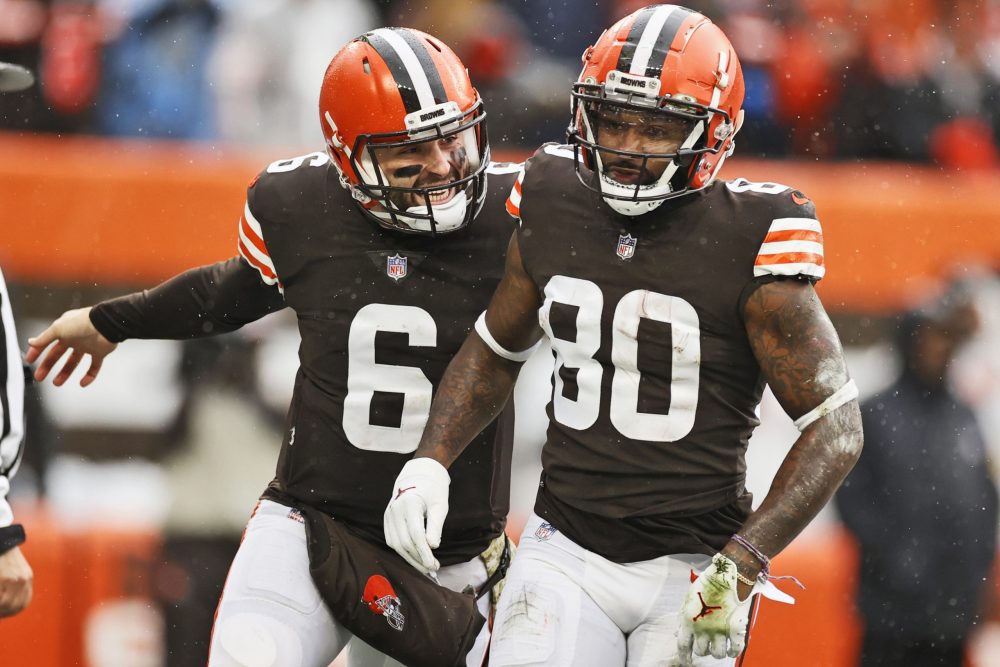 CLEVELAND — Victorious but battered quarterback Baker Mayfield walked straight off the field without celebrating and declined to do his league-mandated postgame news conference.

No. 1 receiver Jarvis Landry could barely run by the end of the game after another injury to his left knee.

The penalties kept coming — 10 more — Mayfield misfired for much of the day and the offense scored 17 points or fewer for the sixth time in the last eight weeks.

The Browns won the game they couldn’t afford to lose Sunday, hanging on for a 13-10 decision over the winless Detroit Lions at FirstEnergy Stadium.


The Browns (6-5) remain in the thick of the AFC playoff chase but still have a lot of issues to resolve. They don’t have much time.

Their next two games are against the AFC North-leading Ravens (7-3), starting with Sunday night in Baltimore. The Browns have a bye before the rematch Dec. 12 on the lakefront.

“They are a great team. You have two games against the team at the top of the division,” coach Kevin Stefanski said. “We have to be at our best.

“Any time you win is a big boost to what you are doing. It does not mean that you do not make adjustments or fix some things you are not doing great. We will do that, but we also know what is in front of us.”

The game matched the weather in sloppiness.

The quarterbacks threw two interceptions apiece in the wind and drizzle. Both teams committed stupid penalties. Third-down conversions were few and far between.

“It was sloppy. It was wet. It was not pristine for the pass game,” Stefanski said.

The final score looked good enough for the Browns.

“Wins always fix everything,” defensive end Myles Garrett said. “When you get a win, that’s all that matters.”

Cleveland didn’t score in the second half, and Mayfield was booed by the home crowd after his second interception, which set up a Lions field goal to make it 13-10 with 9:07 left in the game, and a third-down incompletion that gave the Lions (0-9-1) a final chance to tie or take the lead.

Mayfield entered the game slowed by a sore left heel and bruised right knee, as well as the torn labrum and fracture in his left, non-throwing shoulder. He came up limping a couple of times in the second half but didn’t miss a snap.

He was 15-for-29 for 176 yards, a touchdown, two interceptions and a 53.2 passer rating. The first interception was high and wide of a wide-open Landry on a deep in, and the second was deflected by linebacker Alex Anzalone.

“He was cleared to go in there,” Stefanski said of Mayfield. “I think you guys know, he is toughing it out and he is battling.”

“It motivates us,” running back Nick Chubb said. “We’re all playing for each other. To see him battling, he’s banged up pretty bad, he’s out there at practice and during the game, and it gets us going. We want to win for each other.”

Chubb made the wish come true.

He came off the COVID-19 list Friday after 10 days and rushed 22 times for 130 yards, a 5.9 average. He added a 5-yard touchdown catch for a 13-0 lead with 1:10 left in the second quarter — Chase McLaughlin’s extra point was blocked — but did his best work on the final possession.

After Lions coach Dan Campbell went with a draw on third-and-14 then punted on fourth-and-9 with 2:36 left, Chubb finished off the victory. He had rushes of 3, 4, 11 and 15 yards, was replaced by D’Ernest Johnson for two rushes and ended the suspense with a 3-yarder on third-and-2 with 1:34 remaining.

The crowd chanted “Chubb” throughout the fourth quarter when he was in the backfield.

“Man, you see the guy Nick Chubb is, the playmaker he is,” said cornerback Denzel Ward, who had an interception. “But it’s not just Nick Chubb, it’s also that front line and opening them up, able to get those first downs that we needed.

“Didn’t even have to have the defense come back on the field. Nick Chubb, he’s a great player and we needed him and he showed up.”

The Browns led 13-0 after halftime and were in control. Landry started the scoring with a 16-yard scramble after lining up at quarterback, taking the shotgun snap, looking to pass and sprinting up the middle.

He caught four passes for 26 yards and limped off the field repeatedly after aggravating the knee but returned for the last possessions. Stefanski praised his toughness and said they’d find out Monday the severity of the injury.

The defense limited the Lions to 245 yards, including 77 passing, and 3-for-11 on third down but allowed a 57-yard touchdown run to D’Andre Swift on third-and-8 with 1:55 left in the third quarter. It got two huge stops in the fourth quarter, holding the Lions to a field goal after Mayfield’s interception and forcing the final punt.

“We made plays when we needed to,” said Garrett, who was held without a full sack for the first time since Week 4. “We had an explosive play that they had, other than that, they really didn’t have any success.”

Quarterback Tim Boyle made his first NFL start in place of the injured Jared Goff and went 15-for-23 for 77 yards, two interceptions and a 34.1 rating. Linebacker Malcolm Smith picked him in the first quarter after Mayfield’s first interception.

“Holding them to 10 points, I thought they were particularly great after two turnovers. They stood up,” Stefanski said of his defense.

The offense has been down for too long, averaging 22.2 points.

Despite all the issues, the Browns are within striking distance of the best teams in the AFC. The Titans are the only one with eight wins.

“Right now, no one’s really pulling away and it’s up for the taking for everybody,” Garrett said. “Titans got beat. So nobody’s looking impervious to being taken down any given Sunday.”

If the Browns are going to make a run, it needs to start against the Ravens.

“They’re always a challenge. They beat us twice last year,” left guard Joel Bitonio said. “It’s a huge game. It’s a division game, it’s the next game. It’s the Baltimore Ravens. We’ve got to be ready for that.”