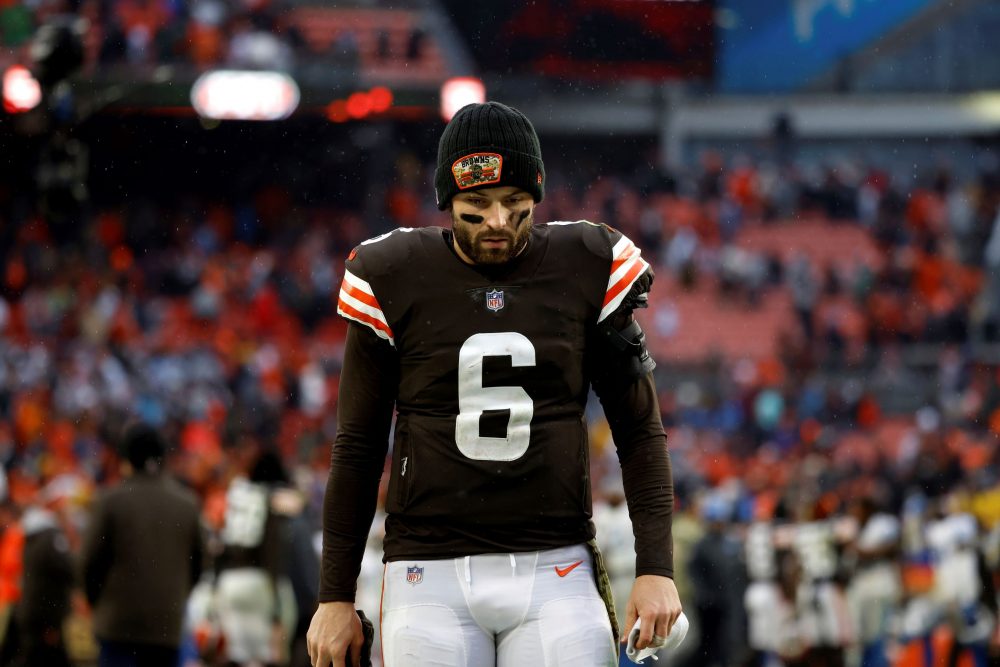 Does a win over a winless opponent count as a win?

For this team, on this day, in this season — absolutely.

The discombobulated Browns can’t afford to throw any of them back. So the fact that their ugly 13-10 win over the winless Detroit Lions on Sunday resembled a grisly carp pulled from the depths of Lake Erie doesn’t matter.

As a last-place team, the Browns can’t be picky. The only NFL team they could have beaten Sunday was the one they were playing, so in that sense, they caught a carp AND a break.

This was supposed to be the Browns’ homecoming game, the patsy opponent teed up for an easy win to send everyone home happy.

Instead, the unthinkable: With 5:16 left in the game, the Browns led 13-10 but the 0-9-1 Lions, quarterbacked by somebody named Tim Boyle, were on the march.

Sort of. It didn’t lead to a winning touchdown for Detroit. But it did lead to another head-scratching performance by the NFL’s most mystifying team.

The Browns have become their own worst enemy. Sunday’s hideous victory offered all sorts of clues, starting with the quarterback. Before-the-fact logic suggested that this was the perfect game — against the lost-in-the-woods Lions — to give banged-up Baker Mayfield a week off to heal and reboot.

Instead, Mayfield played, and he played like a quarterback who looked like he needed a week off to heal and reboot. He completed 17 passes, 15 to his teammates and two to the Lions. He had multiple misfires, including one that was either an overthrow of one targeted receiver, or an underthrow of another one 10 yards down range.

Playing against a Lions defense that has given up the third-most points in the NFL, the Browns were held scoreless in the second half. With what was predicted to be one of the most high-voltage offenses in the league this year, the sputtering, staggering Browns have scored 17 or fewer points in six of their last eight games.

It’s not completely Mayfield’s fault. Stefanski’s play calling has grown more curious and curious this season. But one wonders if the quarterback’s contract situation is becoming the elephant in the huddle, negatively impacting decision-making by the coaches AND the wounded quarterback.

Offensively, the operation has been regressing for nearly two months. Playing a wounded quarterback hasn’t helped, and Sunday it almost cost the Browns a win.

Then there’s the penalty problem, which Stefanski instantly cured in his rookie season last year but has now mushroomed into a major problem, one that almost cost the Browns a win Sunday (10 penalties for 82 yards).

“I don’t know if I have a great explanation,” said the baffled coach. “I am as frustrated as anybody. It’s something that we have to get fixed.”

Indeed, the Browns’ fix-it list is longer than your arm. It seems to grow longer with each game. Things got so far off the rails for a time Sunday that one of the Browns’ touchdowns came with Jarvis Landry taking the snap from center, with Mayfield going in motion. Huh? Yep. Was Landry actually going to throw the ball to Mayfield? If so, that would have been a candidate for “Good Grief” Moment of the Year.

Did the Browns really need that much trickeration to defeat the worst team in the league? No. So, naturally, it worked — after it failed.

Landry decided to keep the ball, and he darted up the middle for a makeshift 16-yard touchdown run, as many of the fans simply looked at each other and shrugged.

“Just the way we drew it up,” joked Stefanski.

At one point in the second half, backup quarterback Case Keenum was warming up. When asked about that, Stefanski said: “I didn’t know. I wasn’t aware.”

The Lions game was the wheezing Browns’ last so-called breather. All of their remaining opponents are formidable, if not demonstrably better than the Browns: Baltimore (twice), Las Vegas, Green Bay, Pittsburgh and Cincinnati.

Given the Browns’ wobbly quarterback and their virtually non-existent passing game, the game plan the rest of the way was likely chanted by Dawg Pounders near the end of Sunday’s game.

“Chubb! Chubb! Chubb!” they pleaded. Stefanski obliged, and the Browns held off the mighty 0-9-1 Lions.

Will a steady diet of Chubb be enough to win enough the rest of the way for the Browns to sneak into the playoffs through the backdoor?

At a crossroads: How Browns wound up 5-5 and facing a must-win vs. Lions
Commentary: A rough season for Baker Mayfield can still be salvaged