Mailbag: Does playing Baker Mayfield despite injuries impede organization’s evaluation of him? 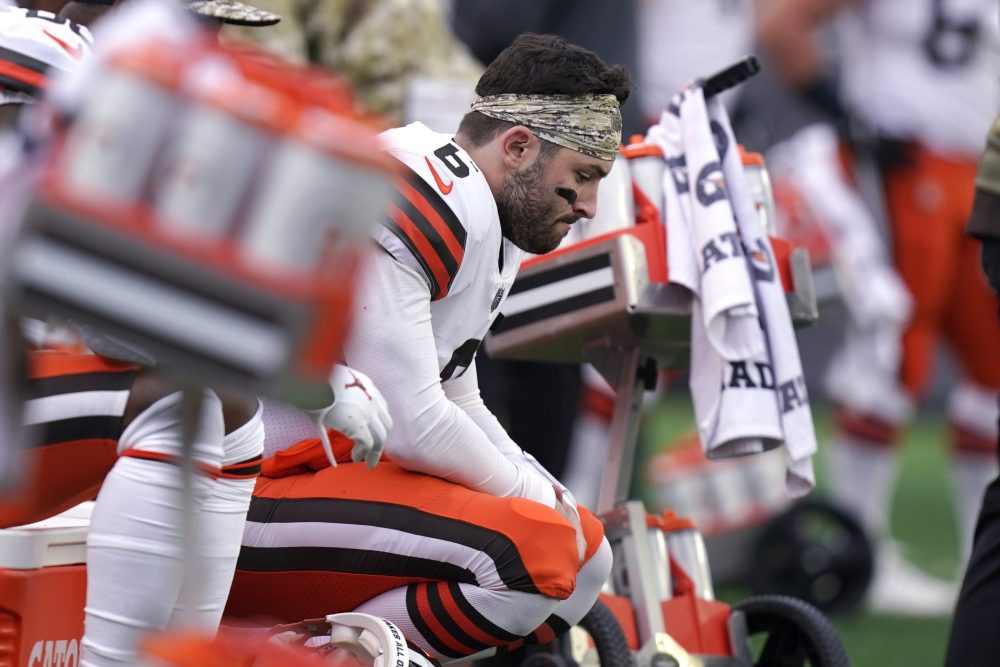 Q: The season has not been as positive as most of us had hoped or expected. So I am seeing more negative comments about Baker Mayfield’s play that I’m not sure is justified. We should be going through the extension decision process — is he “the guy”?

He’s been playing injured for weeks and another injury was added this past week. He certainly has proven that he is tough and I love that about him, but does letting him continue to play under his current physical condition actually impede the ability to make the correct decision about his future? I don’t know the appropriate length of time but two weeks plus a bye week should do wonders for healing. Do you know if it is being discussed? What are your thoughts on this?

A: I’m sure the Browns discussed giving Mayfield time to recover, especially after he mentioned Wednesday he’s as “beat up” as he’s ever been. But I didn’t get the impression resting Mayfield and going with Case Keenum was ever a serious option. Coach Kevin Stefanski said Monday he expected Mayfield to play, Mayfield said the same Wednesday and the message never wavered. My overall opinion is in line with this philosophy: If your starting quarterback is capable of playing, he plays.


At a crossroads: How Browns wound up 5-5 and facing a must-win vs. Lions

I think this is more true at 5-5. The Browns might be able to beat the Lions without Mayfield, but they will need all hands on deck next Sunday night in Baltimore and I wouldn’t be comfortable resting Mayfield if he’s capable of playing.

You make a good point about the Mayfield evaluation. It is so much more difficult because he’s been hampered by the string of injuries. But it’s up to general manager Andrew Berry to factor the injuries into the evaluation. So while Mayfield hasn’t played well enough to secure the extension, the injuries should keep the Browns from giving up on him based solely on this season’s struggles.

Q: Is it only obvious to me that they would rather play an injured Baker Mayfield than Case Keenum?

A: Not at all. That’s the decision made. And as mentioned above, I’m fine with that.

But I don’t think it’s a knock on Keenum. It’s about Mayfield being the starter and playing if he’s capable. If you want to debate whether he’s capable, that’s another story.

Q:
Any explanation for the lack of production from Rashard Higgins? A twofer if you don’t mind: Do you think the coaches are satisfied with the production from Malik Jackson?

A: First of all, Higgins has been deep down the depth chart. Until recently, he was clearly behind Odell Beckham Jr., Jarvis Landry, Donovan Peoples-Jones and Anthony Schwartz. Secondly, I’ve just never been convinced Higgins is a difference-maker. He’s obviously made plays throughout his career and is reliable when thrown to, but he struggles to beat man coverage and doesn’t have a special skill set.

Having said all that, he’s got a great chance to prove me wrong against the Lions. Peoples-Jones (groin) and Schwartz (concussion) are out, so it’ll be a lot of Landry and Higgins.

As for Jackson, I think he’s been a disappointment. Malik McDowell has moved ahead of him as the No. 1 tackle, and Jackson has only a half-sack.

Q: You and guest Dave Chudowsky started down a very interesting road in this week’s podcast and I was hoping you could dive into that a bit more. As we all struggle to understand the Jekyll and Hyde 2021 Browns, was the Browns’ outstanding performance during the pandemic season in some part due to pandemic protocols that a completely new organization could actually leverage, especially an organization like the Browns that embraces new ways of thinking, while this season’s turbulence is driven at least in part from the fact that the playing field has been leveled back to near normal in terms of how teams prepare and play the game?

A: I think it’s reasonable to believe that could be a factor. The Browns were as well-positioned as any team a year ago to deal with the challenges given the youth and intelligence throughout the organization. Stefanski’s even-keel personality also helped the team navigate the difficult season.

A number of things have played into the inconsistency this year. I think the freedom players have this year, combined with the inflated opinion of themselves after last year’s playoff run, could account for the missing “edge” that the Browns played with a year ago.

Q: Most important question … what his your favorite thing to eat on Turkey Day??

A: Everything. But if I have to choose: pumpkin pie, peas and carrots and mashed potatoes.

Q: Do the Browns plan on adding running back John Kelly Jr. back to the practice squad?

A: I haven’t been told yes, but I assume so. Waiving a player on Saturday usually allows him to clear waivers easier.