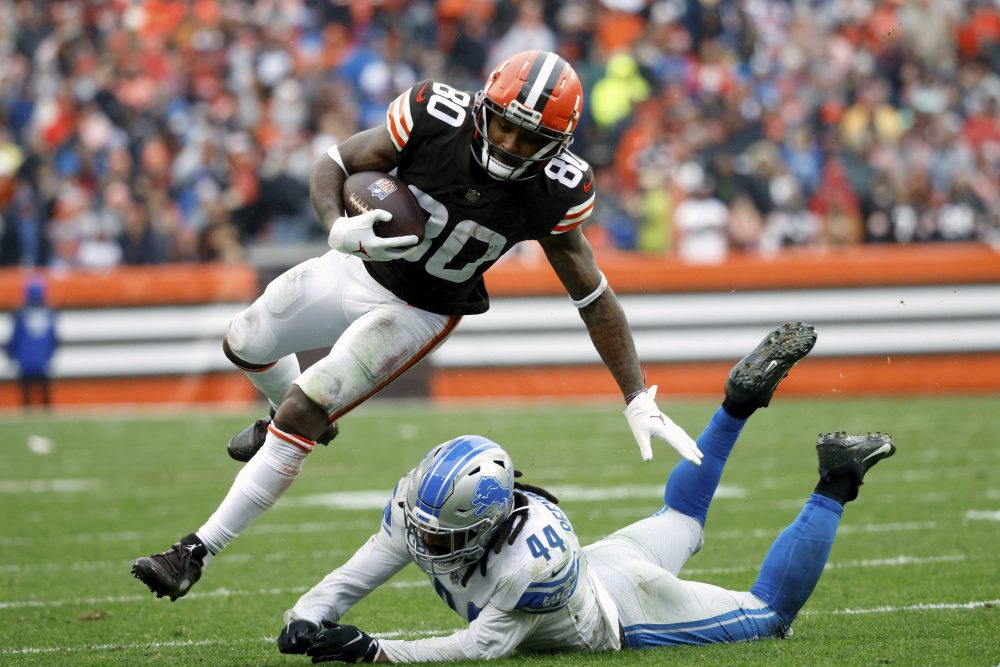 Perhaps his most impressive play Sunday in the 13-10 win over the Lions at FirstEnergy Stadium was a fourth-quarter block on an 11-yard Nick Chubb run.

Landry missed four games earlier in the season with a sprained medial collateral ligament and hasn’t been 100 percent since returning Oct. 21. The knee was hurt again with 9:44 left in the third quarter Sunday when he tried unsuccessfully to catch a low throw from Baker Mayfield over the middle.

Landry, who turns 29 next Sunday, walked slowly to the sideline with a limp. He re-entered for one play before exiting again and going to the medical tent. He then rode the stationary bike and jogged on the sideline.

He came back again in the fourth quarter and finished the game, including going in motion and being the lead blocker on the Chubb run to the left.

“Jarvis, he’s tough,” said Chubb, who rushed for 130 yards and caught a 5-yard touchdown pass. “He wants to win at any cost. He was a little banged up. He has been the whole season, but he goes out there every week and he plays his heart out.

“It says a lot about the person he is, and he wants to win bad. A lot of guys on this team are like that.”

Landry will be examined again Monday to determine the severity of the latest injury.

“Jarvis, he is banged up and then he wants to go back in there and wants to fight,” coach Kevin Stefanski said. “He had a great, great play for a touchdown early.

“I wish we did design it to do that so we could take credit for it. That is just a great player making a great play.”

The rushing touchdown came after Landry took the shotgun snap — Mayfield was to his right — looked to throw then took off up the middle. It was his second rushing score of the year and fifth of his career, trailing only Tavon Austin (seven) and Deebo Samuel (five) among receivers since 2014.

Landry was targeted a team-high eight times, including on both of Mayfield’s interceptions, as Stefanski and Mayfield made a concerted effort to get him the ball after he made it clear last week he wasn’t happy with his number of touches.

“Every game we are trying to get him involved — running it, throwing it, catching it and all of the above,” Stefanski said.

MORE WORK TO DO

Stefanski has been trying to cut down on the penalties for most of the season. He’s failed.

The Browns were penalized 10 times for 82 yards. They entered with 70 penalties for 644 yards.

Defensive tackles Malik McDowell and Tommy Togiai and defensive end Myles Garrett were called for neutral zone infractions, McDowell got a roughing the passer penalty and right guard Wyatt Teller was whistled for a false start, hold and block in the back.

“Very, very frustrating. It is not good. It hurts you as a team,” Stefanski said. “The presnap penalties where we are jumping offside are unacceptable. We have to get it cleaned up, and we will.

“I do not know if I have a great explanation. I am as frustrated as anybody. It is something that we have to get fixed.”

Garrett said he was trying to time the snap and he’ll take an offside penalty or two if it results in sacks and wins.

The action got heated toward the end of the third quarter with a lot of pushing, shoving and jawing. Lions guard Jonah Jackson was penalized for unsportsmanlike conduct after the final play of the third quarter, giving them first-and-25, which led to a punt three plays later.

“I got an explanation. It was something about somebody’s mother,” Lions coach Dan Campbell said. “There was a lot of talking going on out there, but it was a penalty.”

“I didn’t hear it, but a your mama joke will probably get you booked every time,” Garrett said. “It’s a physical, physical game. It’s trench warfare. Gotta go out there, talk a little, hit a little, you do your best to try and get in their head and we were able to get one on them.

“It was getting real chippy until that point. Just try to keep guys composed on the sideline going out there at the end of the third quarter. We stayed a little bit more composed than they did.”

Rookie linebacker Jeremiah Owusu-Koramoah left in the third quarter with an ankle injury and didn’t return. Stefanski said it was the same ankle that Owusu-Koramoah sprained earlier in the year, forcing him to miss three games on injured reserve. He returned last week.

** The Landry injury left the Browns severely short-handed at receiver until he returned.

Donovan Peoples-Jones (groin) and rookie speedster Anthony Schwartz (concussion) were inactive. Peoples-Jones had been listed as questionable after aggravating the injury Wednesday during practice.

Landry and Rashard Higgins started, and Ja’Marcus Bradley was the third receiver. Rookie receiver/running back Demetric Felton and Lawrence Cager, who was elevated from the practice squad Saturday, also got time.

Safety Grant Delpit started in place of Ronnie Harrison Jr. for the first series, but Harrison worked with the starters the rest of the game. Delpit played in three-safety packages.

** No. 3 defensive end Takk McKinley (groin) was inactive for the second straight game and third in four weeks. He was limited all week in practice and listed as questionable.

** With Hill out, starting cornerback Greg Newsome II moved into the slot in the nickel with Greedy Williams playing outside.

Chase McLaughlin missed a 46-yard field goal wide right and had an extra point blocked. He’s 13-for-16 on field goals, with all three misses between 40 and 49 yards.

** The Browns beat the Lions for the first time since 2001, snapping a four-game skid.