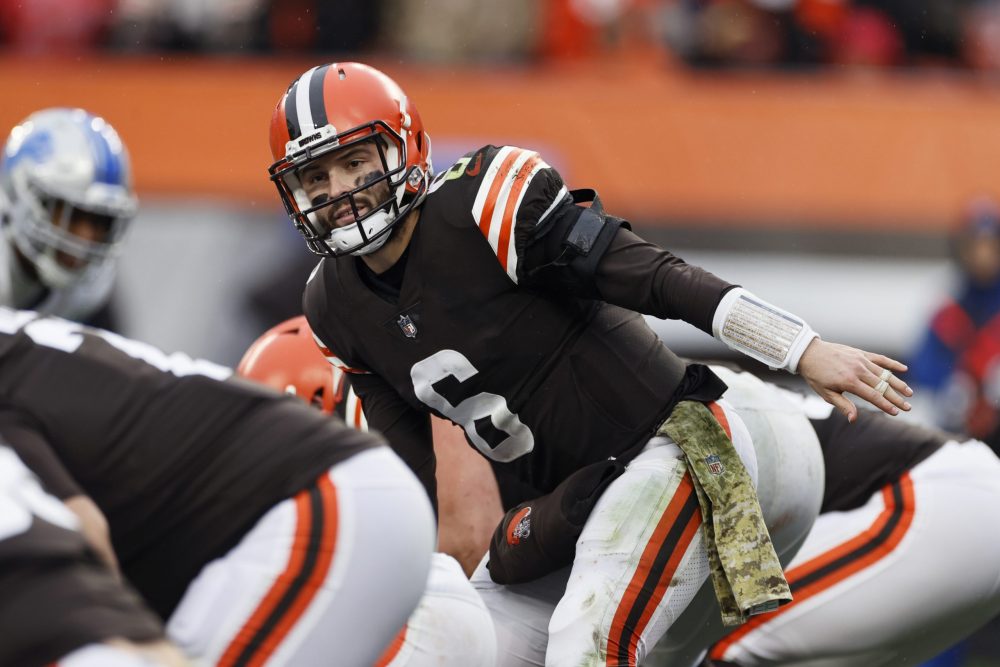 Baker Mayfield was frustrated by his performance.

“I’d be the first to tell you I played like shit,” he said Monday on Zoom.

By the numerous injuries that continue to hinder him.

“There was one shot that I took that kinda reaggravated some things,” he said.


By the boos from the home crowd.

“Those are probably the same fans that won’t be quiet while we’re on offense and trying to operate. So don’t really care,” he said.

Mayfield’s irritation reached a level Sunday that he decided it was best to skip the league-mandated postgame interview — even though the Browns hung on to beat the Lions 13-10 at FirstEnergy Stadium.

“I was frustrated, among other things,” he said. “I’ve never dodged any questions or hid away from that — so just frustrated, removed those emotions and all of that from it and decided it was best to wait.

“Not one part of that is not being accountable. I don’t owe you guys any of that. I owe that to my teammates and I talked to them, so that’s what matters.”

Mayfield said he didn’t have any major setbacks from an injury standpoint and expects to start Sunday night in Baltimore in a huge AFC North matchup. Although he came up limping multiple times in the second half, he was encouraged that he was able to scramble a couple of times and believes his health will improve over the next few weeks, especially with the bye after the game Sunday.

“For the most part yesterday it felt great,” he said. “I do expect to be in better condition than I have in the past weeks. I feel positive about everything that we’re doing.”

“We won’t put guys out there who cannot protect themselves,” he said. “He is definitely battling. But he is ready to play and ready to help the team win.

“If he is limited and can’t play up to his potential, those are things that we will discuss. We will never do anything that is not in the best interest of the team.”

The joy Mayfield showed congratulating receiver Jarvis Landry on his rushing touchdown to start the second quarter was missing when the game ended. Mayfield flipped the ball to the official and walked straight into the locker room without a smile or any celebration.

“My guys know that all I care about is winning, but I’m going to be frustrated if I do stuff to make it harder on us, and I did yesterday and that’s just flat out where it was,” he said.

Center JC Tretter didn’t notice Mayfield’s quick getaway and said he joined the celebration in the locker room as usual.

“Once you get back to the locker room, that is really the time to celebrate, be with your teammates and enjoy those winning moments,” Tretter said. “I take nothing from Baker heading into the locker room. We are all human beings and we get frustrated.”

Mayfield’s exasperation has been building.

He hasn’t played nearly as well as he’d hoped and the team has struggled to a 6-5 record. He’s limited in what he can do on the field after suffering a left labrum tear in Week 2, a left shoulder fracture in Week 7, a left heel bruise in Week 9 and a right knee bruise in Week 10. He appears further away from getting a long-term contract extension. And a segment of the fan base has given up on him.

“I’m frustrated with my execution, everything, just trying to internalize, that’s how I handle things,” he said. “Obviously my body. It’s the same thing over and over again, there’s no reason to keep repeating it.”

Mayfield went 15-for-29 for 176 yards, a touchdown, two interceptions and a 53.2 passer rating. He made a handful of really good throws but misfired badly on too many, including a first-quarter interception intended for Landry.

Mayfield finished the game going 1-for-7 for minus-1 yard with an interception and a sack and was most bothered by his inaccuracy. In the last two weeks, he’s completed 52.4 percent and 51.8 percent, and for the season ranks 25th at 64 percent.

“I’ve always been an accurate guy and that was not the case yesterday and that’s extremely frustrating to me when I feel like I let my teammates down,” he said.

He mentioned the injuries and weather as factors but not the reason.

“It’s some of the harder throws I can make and then some of the easy ones I’ve done time and time again just don’t happen. That’s very frustrating,” he said.

Mayfield ranks 21st in passing yards (2,166), seventh in yards per attempt (7.9), tied for 23rd in touchdown passes (10), 18th in interception percentage (2.2) and 22nd in rating (91.3). Stefanski has talked to Mayfield about the injuries affecting his throwing mechanics.

Stefanski used more rollouts against the Lions than in recent weeks — one of Mayfield’s strengths — and they both said they’re on the same page when it comes to the game plan.

“Obviously we want to make sure that our offense is scoring more points than it is right now, and I take a lion’s share — you can put that responsibility on me,” Stefanski said. “I need to do better. There are plays that we just did not do a good enough job yesterday of giving the guys an opportunity.

“I do think that as a collective group we are on the same page, yes.”

Mayfield liked the improvement in the red zone — touchdowns on both chances — and wants to see even greater improvement on third down (5-for-13).

“It’s about putting it all together,” he said. “When we do our job and we do it well, we’re a really good team.”

Tretter has played through chronic knee pain for years and knows the toll injuries take.

“That is something that people overlook is kind of that mental grind of playing hurt for a lot of time in the middle of the season,” he said. “It is just kind of exhausting. It is definitely tough, but I think Baker is fighting hard for us right now. We really appreciate that from him.

“We know he is up to the task and he is going to play with us. We want him out there with us.”