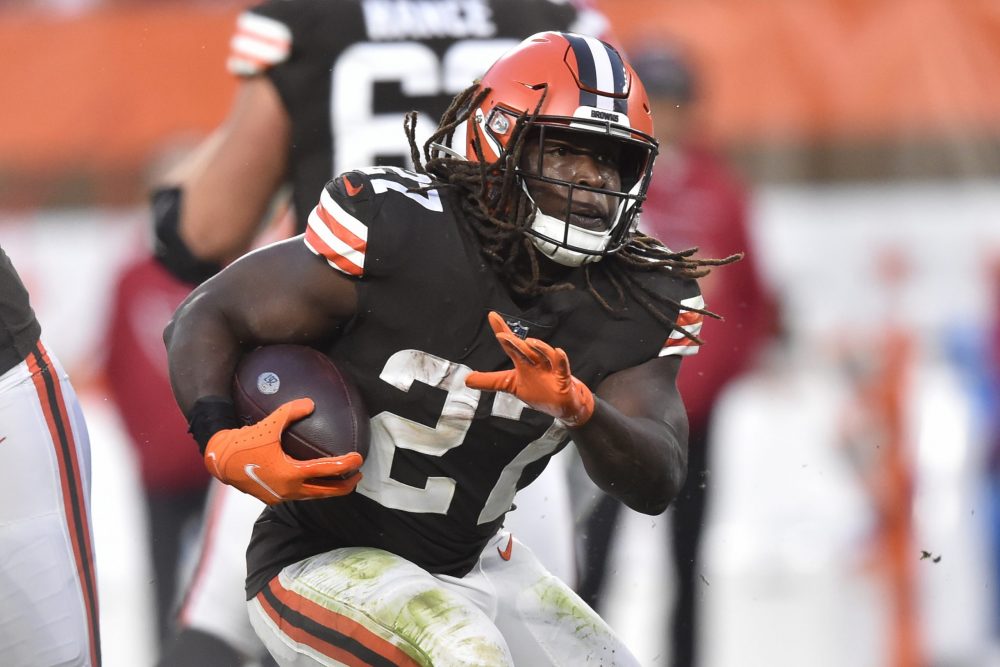 The Browns could get back two important pieces of the offense just in time for a critical matchup against the Baltimore Ravens.

“They are both progressing well,” he said.

Hunt has missed the last five games with a calf injury. Conklin has missed three straight with a dislocated left elbow.

The struggling offense needs all the help it can get. The Browns have scored 17 or fewer points in six of the last eight games.

“It would be huge,” center JC Tretter said of Conklin’s return. “He had kind of a scary injury and he’s been rehabbing extremely hard trying to get back as soon as possible.

“It would be a huge addition for our line and for our team getting him back out there. He’s a heckuva player. We’re going to go against a really unique defense, having experienced and talented offensive linemen out there will only help us on Sunday.”

Blake Hance is playing out of position at tackle and has struggled in place of Conklin.

In six games, Hunt has 69 carries for 361 yards and five touchdowns and 20 catches for 161 yards. He had never missed an NFL game due to injury until going down without contact Oct. 17 in a loss to the Cardinals.

“Kareem is kind of our Swiss Army knife,” Tretter said. “He can do it all, pass game, run game. I give D’Ernest (Johnson) a ton of credit, D’Ernest has played extremely well in Kareem’s absence and in the games where Nick (Chubb) wasn’t in there, too. But Kareem’s kind of a special player for us.

“It’s kind of tough to truly put into words what he brings to the table. But he’s just kind of that guy that makes everything go. We’re lucky to have a guy like Nick and then having a guy come into spell him like Kareem, we’re lucky to have that because he’s one of the most talented backs in the league, as well.”

Stefanski said receiver Jarvis Landry should be able to continue to play through his nagging left knee injury. He missed four games earlier in the year with a sprained medial collateral ligament and limped off the field twice Sunday during the 13-10 win over the Lions but returned to finish the game.

** Rookie linebacker Jeremiah Owusu-Koramoah is also expected to play against the Ravens after exiting Sunday after aggravating an ankle injury that caused him to miss three games.

The prime-time game against the Ravens (7-3) gives the Browns (6-5) a chance to close the gap in the AFC North. They meet again Dec. 12 in Cleveland after the Browns’ bye week.

“Everybody wants to act like the world’s falling,” quarterback Baker Mayfield said. “No, we haven’t played to our potential and we know that more than anybody because we sit there and watch the film and we know what we’re supposed to do.

“And we have six wins and the Ravens are leading the division with seven. We know what’s at stake, we know what we need to do and that’s how we’re going to handle it this week.”

The Browns were penalized 10 times for 82 yards Sunday, giving them 80 penalties (second in the NFL) for 726 yards (first) for the season. Stefanski said they were the biggest reason the Browns didn’t score in the second half.

“If the answer was easy, it would be quick to stop,” Tretter said of the presnap penalties. “It’s just focus at this point. It’s just understanding you need to be hyper-aware and hyper-focused to avoid those, and those are just purely mental lapses.

“Those are all 100 percent avoidable, and we just have to do a better job as players. You can’t coach that out of us.”

The Browns entered Sunday as the fifth-ranked run defense (94.7) but continued the negative trend. The Lions rushed 23 times for 168 yards, a 7.3 average. D’Andre Swift carried 14 times for 136 yards, including a 57-yard touchdown.

“We gave up too many rush yards in that second half, and it is just a matter of fits and tackling,” Stefanski said. “Sometimes it is tackling. Sometimes it is tracking to the tackle. We just did not do a great job, and that team runs a physical run game.”

Safety Ronnie Harrison Jr. was benched for the first series — Grant Delpit replaced him — but played the rest of the game, 42 of the 48 defensive snaps.

“That was a disciplinary reason, and I will just keep it between Ronnie and myself,” Stefanski said.

Harrison was late to practice Friday, and the team listed the reason as “personal” on the injury report.

He made six tackles, including one for loss.

Many of the players will do charity work around the area Tuesday in advance of Thanksgiving. Defensive tackle Malik Jackson will be at Black River Landings in Lorain from 3:30-5:30 p.m. giving out chickens, Thanksgiving meals and Browns gear in a partnership with Second Harvest Food Bank of North Central Ohio. Attendees have been invited and the event isn’t open to public walkups.

** After a string of injuries at the position, Ja’Marcus Bradley led receivers by playing 55 of the 74 offensive snaps in his first action of the year. Rashard Higgins had 53 snaps and Landry 48.