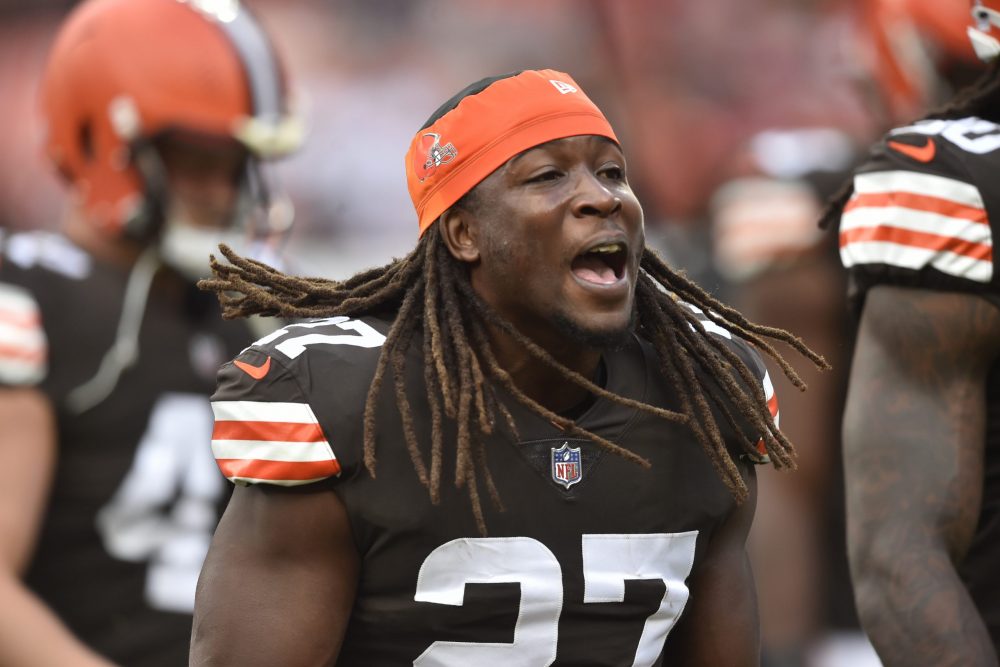 BEREA — Kareem Hunt had never missed an NFL game due to injury. After sitting out the last five with a strained calf, the running back doesn’t plan to miss any more.

“Yeah, see how I feel during the week, but I’m definitely thinking I’m going to play,” Hunt said Wednesday.

He and All-Pro right tackle Jack Conklin (dislocated left elbow) practiced after being designated to return from injured reserve. The move opens a 21-day window to be activated to the 53-man roster, but the hope for the Browns (6-5) is both will be able to play Sunday night against the Ravens (7-3).

“Getting the boys back together, so we’re obviously looking forward to it,” quarterback Baker Mayfield said. “We’ll see how Kareem does this week and it will be great, those are two extremely key pieces in our offense and obviously Kareem is a great playmaker and Jack, his play speaks for itself.”


#Browns Baker Mayfield on potential return Sunday of Kareem Hunt and Jack Conklin: We’re getting the guys back together. pic.twitter.com/6Qw43gKyxf

Returning for the pivotal clash with the Ravens was motivation for Hunt during his rehab after he got hurt Oct. 17 vs. the Cardinals.

“Oh, most definitely,” he said. “Every game for us from now on is like a playoff game, so no matter (what) we’ve got to win.”

In six games, Hunt has 69 carries for 361 yards and five touchdowns and 20 catches for 161 yards. He splits time with starter Nick Chubb, plays with all-out effort, provides a jolt in the run and pass games and could help Mayfield get back on track after ugly performances against the Patriots and Lions in which he completed 26 of 50 passes (52 percent) for 259 yards, two touchdowns, three interceptions and a 54.5 passer rating.

“Kareem just energy-wise, it’s that spark he comes in and plays with,” Mayfield said. “That’s an extremely vital part for us and when it comes to the explosive portion of our offense, we’ve been missing that with him. He’s a key part of our offense.”

Mayfield’s completion percentage should rise by getting the ball to Hunt out of the backfield.

“That makes life easy on some of these checkdowns where it can turn into an explosive play,” Mayfield said.

The offense struggled without Hunt and Conklin, who has missed three straight games, as the Browns have scored 17 or fewer points in six of the last eight games.

“I get kind of ticked off when I can’t be out there to help if we’re not playing real well,” Hunt said. “It’s out of your control now when you’re on the couch.”

Conklin would be a significant upgrade over Blake Hance, who’s been playing out of position. Conklin’s injury looked like a season-ender when he went down vs. the Steelers. A cart was called immediately and an air cast readied, but he didn’t use either.

“Any time you see a guy down like we did in the game, I wasn’t thinking it would be a weeks injury like it was,” coach Kevin Stefanski said. “Not surprised, though, when you think about Jack and the type of person and player he is. He’s as tough as they come.”

The Browns will need all the talent, playmaking and energy they can muster for the prime-time matchup in rowdy M&T Bank Stadium.

“I always bring the fire, so I’m definitely going to come with a lot of energy and fire and just the love because I miss the game,” Hunt said. “I miss practice. I miss playing the games. I miss everything. So I’m definitely excited.”

Stefanski expected Hunt’s impact to be felt Wednesday and Sunday.

“He brings energy, brings a toughness to what he does, so I think it gives the guys a boost starting today,” he said. “He’s great in pass pro, a threat coming out of the backfield to catch routes, can line up outside the backfield to catch routes and we know what type of runner he is. He runs so hard and just gains those extra yards it feels like with each one of his runs.”

Hunt knew “right away” the calf injury was serious when he tried to plant and push off and it gave out. It turned out to be a “pretty bad” strain.

He and Chubb haven’t played together since Oct. 10 against the Chargers, depriving the Browns of the league’s best one-two punch.

“To have those two guys in the backfield, obviously complements with D’Ernest (Johnson), as well, just to be able to rotate those guys in and have fresh legs is great,” Mayfield said. “It’s a great part of the season to have that, so looking forward to that part. They complement each other well.”