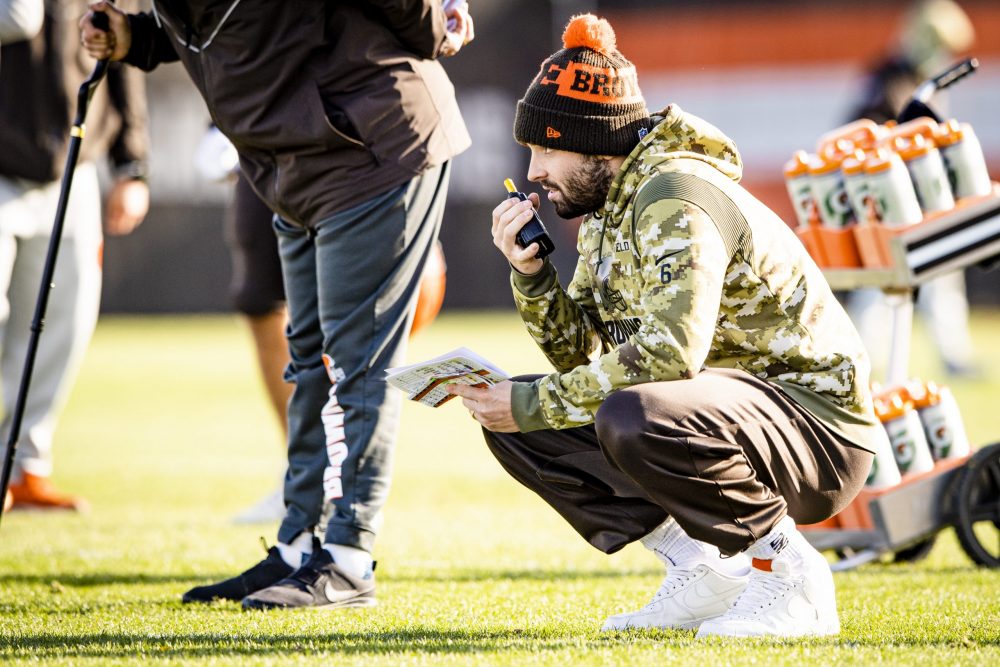 The beat up quarterback wasn’t listed on the pre-practice injury report as a non-participant and said he was “going to try and go for sure, definitely.”

“It is always good when guys can practice throughout the week,” coach Kevin Stefanski said before practice. “I think for all players it is good if you can put three days together.”

Instead, Mayfield didn’t practice and watched in a stocking cap and sweatshirt. He was listed on the injury report with left shoulder, foot and groin injuries.

He also sat out the Wednesday practice last week, returned Thursday and played in the 13-10 win over the Lions. He plans to play Sunday night at Baltimore and said the day off last week helped the sore left heel and bruised right knee that is no longer an issue.

“It did. I still got the mental reps,” he said. “Like we just finished up walkthrough doing all that, so that’s this part of the season where a lot of guys are banged up, a lot of guys, it’s just so important to be mentally locked in during the week when you might not get some of these reps.”

Mayfield has dealt with a torn labrum in his left, non-throwing shoulder since Week 2, Sept. 19 against the Texans. A fracture in the shoulder was added Oct. 17 against the Cardinals.

He said Wednesday the heel had been bothering him the day after games but he felt it in a game for the first time Nov. 7 at Cincinnati. The knee was bruised the following week at New England.

He said he came through the Lions game with no “setbacks,” but the groin injury on the report Wednesday was new.

“It’s a couple hours extra of rehab or whatnot throughout the week, but that’s what’s necessary this time of the year,” he said of all the injuries. “I’m feeling better and better as the weeks go on.”

Mayfield called playing through the left shoulder injuries his “new normal.” He said he still tries to protect it on the field but the leg injuries have kept him from scrambling as much as he’d like.

“There’s plays to be made with my feet and that’s where I’ve been kind of frustrated with that,” he said.

He scrambled four times for 9 yards against the Lions, including a 7-yard gain, and Stefanski believes more of those plays will be coming as Mayfield gets healthier.

“I thought he made some nice plays there with his feet,” Stefanski said. “Certainly that adds an element to any offense’s game. You look at some of the big rush attacks around the league, often times there are quarterbacks who are a big focal point of that. Any which way you can gain those yards is a big deal.”

At 6-5, the Browns haven’t met expectations. They remain in the mix for a playoff spot with five of their last six games against AFC opponents, including four inside the AFC North.

The critical run starts vs. the Ravens.

“Obviously any time you have a divisional game it’s a huge game for us,” Mayfield said. “Turning point in the season? I mean, we have a winning record. Everybody else wants to throw us in the trash, but we know exactly what’s in front of us and that’s how we’re going to handle it.”

The Browns practiced without their top three receivers: Jarvis Landry (knee), Donovan Peoples-Jones (groin) and rookie Anthony Schwartz (concussion). Stefanski said he felt good about Landry playing Sunday but was less certain about the other two.

Schwartz was concussed Nov. 14 vs. the Patriots and remained in the protocol, although Stefanski said he’s progressing and attended meetings.

Peoples-Jones has missed three of the last five games, including vs. the Lions. He rode the stationary bike Wednesday.

“We’re asking guys to step up and be role players when Donovan is down,” Mayfield said. “He’s an important part of our downfield passing game. We have to find ways to make up for it when he’s not in.”

Rashard Higgins, Ja’Marcus Bradley and rookie Demetric Felton are the next three wideouts on the depth chart.

Landry missed four games early in the year with a sprained medial collateral ligament and has aggravated it twice since returning Oct. 21. He and Mayfield are regulars in the trainer’s room.

“Unfortunately, yes, that is the place where we do spend a lot of time together,” Mayfield said. “We would do it regardless, but that’s where we’re at right now.”

Ravens quarterback Lamar Jackson practiced and said he’ll definitely play against the Browns. He didn’t play Sunday in a 16-13 win over the Bears because of an illness. He thought he was over it Friday but got sick again Saturday.

Stefanski said the Browns use multiple players to simulate Jackson in practice.

“Now it does not matter who you put back there, it is not going to replicate his athleticism, his speed, his ability to make throws from the pocket and all of that,” Stefanski said. “He is a rare talent.”

Nickelback Troy Hill (neck) returned to practice in a limited role after being wheeled off the field Nov. 14 against the Patriots and taken to a hospital.

“To see him come out of that and pushing towards practice is a great thing,” Stefanski said.

** Cornerback A.J. Green practiced fully after clearing concussion protocol. He was hurt against the Patriots.

** Defensive tackle Malik Jackson (knee) didn’t practice and worked on the side.

McKinley has missed the last two games and three of four, but Stefanski said he’s “close” to returning.

“I am hopeful that he gets three good (practice) days this week,” he said.

Defensive end Myles Garrett is fourth in the NFL in Pro Bowl fan voting with 76,064, the most among defensive players. Left guard Joel Bitonio leads all guards with 38,810.

Garrett, United Way of Greater Cleveland’s newly appointed ambassador, hosted a community event Tuesday in Cleveland in which area kids and their families were able to fill bags with winter attire and school supplies. The kids also participated in an art project station with Garrett.

Practice will be earlier Thursday and the players won’t have afternoon meetings so they can get home for Thanksgiving.

** Quarterback Nick Mullens, kicker Chris Naggar, defensive end Porter Gustin and defensive back Herb Miller were protected from being signed off the practice squad this week by another team.